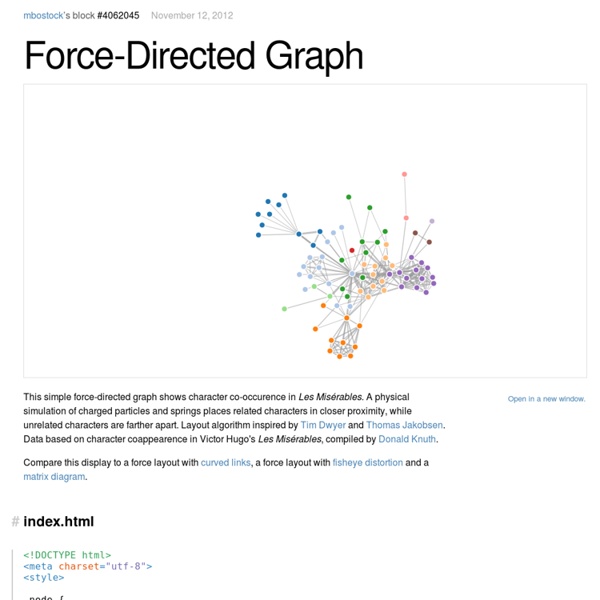 Chicago Lobbyists Force-Directed Graph Visualization Created by Christopher Manning Summary This visualization includes the 50 highest paid lobbyists in Chicago, their clients, and the agencies they lobby. The data was compiled from ChicagoLobbyists.org in 2010. Blue Nodes: LobbyistsGrey Nodes: ClientsGreen Nodes: Agencies The radius of the Blue(Lobbyist) and Grey(Client) nodes is relative to the amount of money associated with them. Tutorials · mbostock/d3 Wiki Wiki ▸ Tutorials Please feel free to add links to your work! Introductions & Core Concepts Specific Techniques Blogs 38 Tools For Beautiful Data Visualisations As we enter the Big Data era, it becomes more important to properly expand our capacity to process information for analysis and communication purposes. In a business context, this is evident as good visualisation techniques can support statistical treatment of data, or even become an analysis technique. But also, can be used as a communication tool to report insights that inform decisions.

d3.js: force layout; click to group/bundle nodes; multiple relations Derived from the D3.js example force_cluster.html and gist 3071239. Pictures, my dear! See the graph in various states of undress, click to see the full-rez centerfold: Usage Click on node to expand or collapse. When a node has 'bundled' outgoing links, the first click will expand only those (a.k.a. 2nd display mode / expand state = 1), the next click will then expand the group node itself.Click on hull (which shows up when you expanded a group node) to collapse the group.Drag node to move entire graph around. Let's Make a Bar Chart A few days ago I started taking a closer look at Michael Bostock's D3.js. D3 is an amazing JavaScript library for mapping data to HTML elements or SVG nodes. I started off making some bar charts with HTML elements and then moved onto SVG nodes and transitions. Generally, to make simple charts, all you need to do is follow these steps: Select the place you want to put your chartSelect all the chart componentsApply the data to this selectionAdd a new compononent for each piece of data that wasn't appliedPosition the new componentsApply any other attributes or styles Here's an example of a bar chart and the code that will create it below:

HeliosJS by entrendipity HeliosJS is an in-memory graph database for modern browsers. It employs a non-blocking asynchronous architecture through the use of Promises and Web Workers, and therefore is only available in browsers that support Web Workers. This enables HeliosJS to download and process large data sets without blocking the UI. In order to traverse the graph, HeliosJS uses a Gremlin inspired graph traversal language to query, analyze and manipulate the graph.

April 2012 Now as promised, here is some example code that builds on top of the d3 examples. I will start with the 'Force directed layour (with labels & images)', then add a coloured circle on each node and as well add some code to bound the nodes and links to within the SVG canvas, taking inspiration from another example 'Bounded force layout'. Let's walk through the code. First, the headers including the latest d3.js files, and some CSS: Create the SVG canvas and attach it to the tag declare above.

Creating Animations and Transitions With D3 For the ambitious, this is a great intro to creating your own animations and transitions in d3.js. If you get in over your head, drop by the Visually Marketplace to hire one of our talented developers. In interactive visualisation, there is the word reactive. Well, maybe not literally, but close enough. Raphaël—JavaScript Library Combining D3 and Raphael to make a network graph « dataist During the past week I have been working on a visualization for Sveriges Radio about Melodifestivalen, the Swedish qualification for the Eurovision Song Contest. Every year there is a HUGE fuzz about this show over here in Sweden. I wanted to explore the songwriters in the competition from a dataist perspective. Who are the guys behind the scene? If you follow Melodifestivalen a few years you will notice how many names occur year after year.

Let’s Make a Bar Chart, III In the previous parts of this tutorial we made a basic bar chart in HTML and then in SVG; now, we’ll improve the display by rotating the chart into columns and adding axes. We’ll also switch to a real dataset, showing the relative frequency of letters in the English language. Source: Cryptological Mathematics, Robert Lewand. #Rotating into Columns Documentation Everything you need to know to build great looking charts using Chart.js Getting started Include Chart.js First we need to include the Chart.js library on the page. The library occupies a global variable of Chart.