A sensational breakthrough: the first bionic hand that can feel - News - Gadgets & Tech 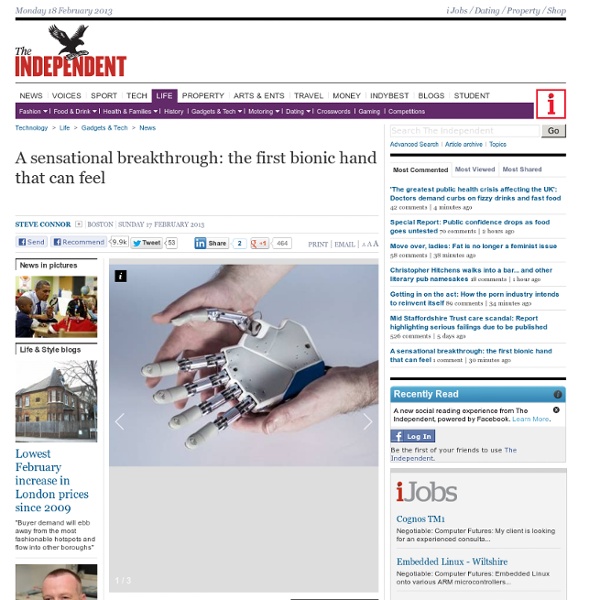 The patient is an unnamed man in his 20s living in Rome who lost the lower part of his arm following an accident, said Silvestro Micera of the Ecole Polytechnique Federale de Lausanne in Switzerland. The wiring of his new bionic hand will be connected to the patient’s nervous system with the hope that the man will be able to control the movements of the hand as well as receiving touch signals from the hand’s skin sensors. Dr Micera said that the hand will be attached directly to the patient’s nervous system via electrodes clipped onto two of the arm’s main nerves, the median and the ulnar nerves. This should allow the man to control the hand by his thoughts, as well as receiving sensory signals to his brain from the hand’s sensors. “This is real progress, real hope for amputees. “It is clear that the more sensory feeling an amputee has, the more likely you will get full acceptance of that limb,” he told the American Association for the Advancement of Science meeting in Boston. Related:  Cyborg - Human Limbs & Prosthetics

Man With Severed Spinal Cord Walks Again After Cell Transplant A man paralyzed for two years is now walking again, albeit with a frame, after a transplant to his spine. The treatment, to be published in this month's Cell Transplantation, has been under discussion for a while, but has only now shown success. In 2010, Darek Fidyka was repeatedly stabbed, rendering him paralyzed from the chest down. Fortunately, however, his nose was unscathed. Olfactory ensheathing glia (OEGs) surround olfactory axons, the nerve fibers that conduct electrical charges from the nose to the brain to allow us to smell. While some reptiles can grow new tails, for mammals the capacity for regrowth is lost in most of the nervous system. This capacity for regrowth has inspired spinal researchers frustrated by the fact that the mammalian central nervous system does not regenerate axons. Animal experiments have produced axon regeneration and even enabled injured rats and dogs to run again Read this next: Scientists Create Electric Generator Just One Atom Thick

3D-printed cyborg muscle produces artificial heartbeat Sandrine Ceurstemont, editor, New Scientist TV You might expect a robot's heartbeat to be a metallic ticking. But the pulsing in this video isn't completely artificial: it's powered by living material. Created by Peter Walters from the University of the West of England in Bristol, UK, and colleagues, the pump uses the gas released by live yeast to generate pressure and distend a membrane, turning it into an artificial muscle. A valve - activated by electricity produced by a microbial fuel cell - controls the movement of the membrane. Walters says that using yeast allows a lot of pressure to be generated quickly. Getting rid of the waste that the yeast produces is also a challenge. A 3D printer created the rigid components of the system as well as the moulds for the flexible silicone parts. In the future, the robotic pulsing could be used in art and design.

How to regenerate axons to recover from spinal-cord injury HKUST researchers cut mouse corticospinal tract axons (labeled red). A year later, they deleted the Pten gene in the experimental group (bottom) but not the control group. The Pten gene removal resulted in axon regrowth in seven months, unlike the control group (top). (credit: Kaimeng Du et al./The Journal of Neuroscience) Researchers at the Hong Kong University of Science and Technology (HKUST) have found a way to help patients recover from chronic spinal cord injury (SCI) by stimulating the growth of axons. Chronic SCI prevents a large number of injured axons from crossing a lesion, particularly in the corticospinal tract (CST). The deletion also up-regulated (increased) the activity of another gene called MTOR (the mammalian target of rapamycin, which further promoted regeneration of the axons. Corticospinal tract (credit: Gray’s Anatomy/Wikimedia Commons) “The regeneration of CST has been a major challenge in the field, especially after chronic injuries.

'Cyborg' spinal implant could help paralysed walk again The implant, called ‘e-Dura’, is so effective because it mimics the soft tissue around the spine – known as the dura mater – so that the body does not reject its presence. “Our e-Dura implant can remain for a long period of time on the spinal cord or cortex,” said Professor Stéphanie Lacour. “This opens up new therapeutic possibilities for patients suffering from neurological trauma or disorders, particularly individuals who have become paralyzed following spinal cord injury.” Previous experiments had shown that chemicals and electrodes implanted in the spine could take on the role of the brain and stimulate nerves, causing the rats' legs to move involuntarily when they were placed on a treadmill. But this is the first study to show a simple gadget can help rats walk again and be tolerated by the body. The electronic ribbon is placed directly onto the spinal cord However the new gadget is flexible and stretchy enough that it can be placed directly onto the spinal cord.

Scientists Regenerate Leg Muscles With Pig Bladder Tissue Muscle can regenerate after an injury, but not if large amounts are destroyed -- such as with military wounds and traumatic accidents. Treatments are limited for these extreme cases of muscle loss, where scar tissue formed to fill in the gap. Stem cells have been shown to work, and these therapies usually follow a similar pattern: take stem cells from the patient, help them develop into the cells of choice, then inject them back. Now, a University of Pittsburgh team led by Stephen Badylak developed a different kind of stem cell treatment that doesn’t involve taking out and adding back stem cells; rather, the stem cells stay in the body. The technique relies on extracellular matrix (ECM) -- the lattice of protein molecules that add structure to living tissue. Once implanted in the body, ECM recruits stem cells to the injury site, where they’re coaxed into becoming muscle cells. The patients had all completed a customized, 12 to 16-week physical therapy program.

MIT researchers augment humans with extra robotic arms Featured in comic books since 1963, Dr. Octopus, or "Doc Ock" is an enemy of Spiderman with four extra robotic arms attached to his back that assist him in his nefarious plans. That vision of humans with extra limbs – minus the supervillain part – is taking shape at MIT with researchers adding "supernumerary robotic arms" to assist with tasks that ordinary two-armed humans would find difficult. View all There are many tasks around the house or factory that you have probably said to yourself, “if I only an extra arm, this would be a lot easier." The project is being run at MIT’s d'Arbeloff Laboratory for Information Systems and Technology and headed by Federico Parietti and Baldin Llorens-Bonilla, both in the Mechanical Engineering Department. The concept was demonstrated with installing ceiling panels in an airplane, a task that must be duplicated dozens of times in the construction of an airliner. The arms are programmed by the "teach by demonstration" method.

Huge Milestone Crossed: First Person to Feel Physical Sensations Through a Prosthetic Hand In Brief Through DARPA, a 28 year old paralyzed man has become the first person to feel physical sensations through a prosthetic hand directly connected to his brain The advance, made possible by sophisticated neural technologies developed under DARPA’s Revolutionizing Prosthetics points to a future in which people living with paralyzed or missing limbs will not only be able to manipulate objects by sending signals from their brain to robotic devices, but also be able to sense precisely what those devices are touching.The clinical work involved the placement of electrode arrays onto the paralyzed volunteer’s sensory cortex—the brain region responsible for identifying tactile sensations such as pressure. In addition, the team placed arrays on the volunteer’s motor cortex, the part of the brain that directs body movements. Then, breaking new neurotechnological ground, the researchers went on to provide the volunteer a sense of touch.