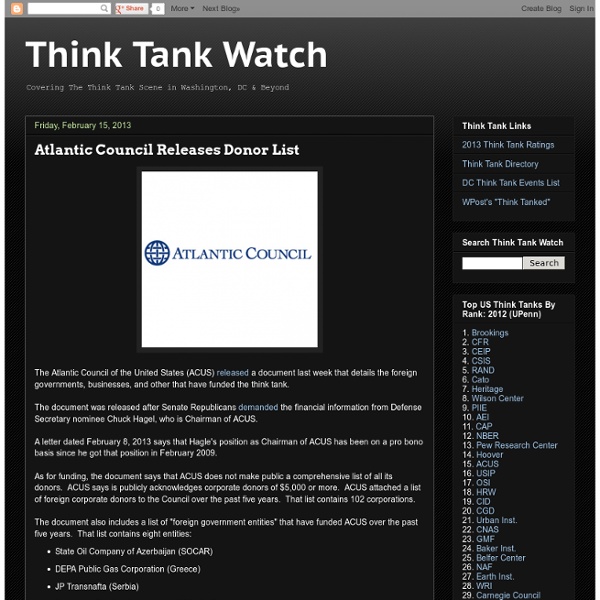 First Thoughts on Piketty I have been reading Thomas Piketty's "Capital in the 21st Century." It is truly an impressive work, and I am much enjoying it. I have recently organized a session at the upcoming AEA meeting (January in Boston), where David Weil, Alan Auerbach, and I will be discussing the book, followed by a response from Professor Piketty. Let me offer a few immediate reactions. The book has three main elements: A history of inequality and wealth. Point 2 is highly conjectural. Point 3 is as much about Piketty’s personal political philosophy as it is about his economics. The bottom line: You can appreciate his economic history without buying into his forecast.

- www.trilateral.org Astroturf Astroturf refers to apparently grassroots-based citizen groups or coalitions that are primarily conceived, created and/or funded by corporations, industry trade associations, political interests or public relations firms. Definitions Campaigns & Elections magazine defines astroturf as a "grassroots program that involves the instant manufacturing of public support for a point of view in which either uninformed activists are recruited or means of deception are used to recruit them." Journalist William Greider has coined his own term to describe corporate grassroots organizing. He calls it "democracy for hire." Unlike genuine grassroots activism which tends to be money-poor but people-rich, astroturf campaigns are typically people-poor but cash-rich. Astroturf techniques have been used to: Sometimes genuine grassroots organizations are recruited into corporate-funded campaigns. NeoCon Astroturf Libertarian Astroturf Coal industry Astroturf ACCCE and Bonner & Associates FACES of Coal References

gov - Department of Defense Websites One of the missions of Defense.gov, the official web site for the Department of Defense, is to serve as the starting point for finding U.S. military information online. These DOD Sites pages contribute to that mission by providing these services: A quick-reference listing of the top DOD Sites, Direct access to the databases of all registered DOD Sites. Academy Acquisition, Technology and Logistics, Deputy Under Secretary of Defense for (AT&L) Administration Advanced Advisory Aerospace Agencies, Defense Air Force Armed Forces Day Army Army National Guard Asia-Pacific Assistant Secretary of Defense

Congressional Pig Book | Citizens Against Government Waste Watch the latest video at <a href=" Introduction For the second time since Congress enacted an earmark moratorium beginning in fiscal year (FY) 2011, Citizens Against Government Waste (CAGW) has found earmarks in the 12 appropriations bills funding the federal government. While a single earmark violates the moratorium, at least the number and cost of the earmarks contained in H.R. 3547, the Consolidated Appropriations Act, 2014, decreased from FY 2012, the last time Congress passed the spending bills. The 2012 Pig Book noted that although there were fewer earmarks than in prior years, the projects involved larger amounts of money and included fewer details. The 2014 omnibus package was certified as earmark-free by Senate Appropriations Committee Chair Barbara Mikulski (D-Md.) and Speaker of the House John Boehner (R-Ohio). The projects in this year’s Congressional Pig Book Summary symbolize the most blatant examples of pork. I. III. IV. V.

Lobbying Disclosure, Office of the Clerk Think tanks A think tank (also called a policy institute) is an organization, institute, corporation, or group that conducts research and engages in advocacy in public policy.[1] Many think tanks are non-profit organizations, which some countries such as the United States and Canada provide with tax exempt status. While many think tanks are funded by governments, interest groups, or businesses, some think tanks also derive income from consulting or research work related to their mandate.[2] In some cases, think tanks are little more than public relations fronts, usually headquartered in state or national seats of government and generating self-serving scholarship that serves the advocacy goals of their industry sponsors. Of course, some think tanks are more legitimate than that. "We've got think tanks the way other towns have firehouses," Washington Post columnist Joel Achenbach says. Think tanks are funded primarily by large businesses and major foundations. US Government Global examples US Examples