Black history in the US 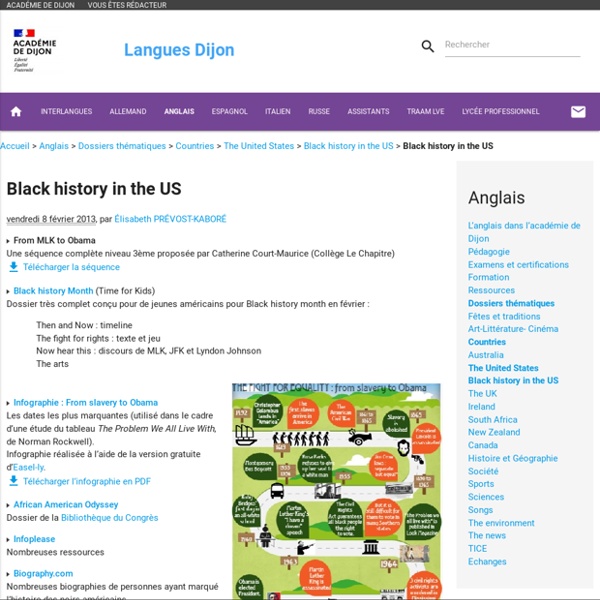 SLAVERY - My schoolbag Solomon Northup as he appears in the original book and Chiwitel Ejiofor, who has been much-praised in the lead role of the film On PBS : Three reviewers give their opinions. A good exercise in class. lien vers le script du film About the relation between book and film Civil Rights Course in Full Operation at FBI Academy Martin Luther King, Jr.’s life, legacy, and a visit to the civil rights leader’s national memorial in Washington, D.C. are part of a course at the FBI Academy. [Singing]: “I know the one thing we did right was the day we started to fight. Keep your eyes on the prize, oh Lord. Oh keep your keep your eyes on the prize, oh Lord.” Mollie Halpern: A mountain of granite appears to grow out of the ground at Washington, D.C.’s National Mall.

Timeline: The Black Lives Matter movement - ABC News (Australian Broadcasting Corporation) Updated 23 Feb 2018, 2:51amFri 23 Feb 2018, 2:51am As the United States continues to grapple with rising tensions over alleged police brutality against black Americans, we look at how a young man's walk to buy sweets in 2012 sparked a nationwide movement. Here are the some of the key moments of the Black Lives Matter movement. Civil Rights for Kids: African-American Civil Rights Movement History >> Civil Rights for Kids March on Washington Aug 28, 1963from the United States Information Agency The African-American Civil Rights Movement was an ongoing fight for racial equality that took place for over 100 years after the Civil War. Leaders such as Martin Luther King, Jr., Booker T. Washington, and Rosa Parks paved the way for non-violent protests which led to changes in the law.

PREMIERES - TOPIC 2 - KEY DATES AND EVENTS - JACOBANGLAIS, le blog d'anglais du Lycée Jacob Holtzer I. The American ideal: 1. The Declaration of Independence The Declaration of Independence, adopted by Congress on July 4th 1776 2. Billie Holiday's Song ''Strange Fruit'' (Lesson Plan Estimated Time of Completion: 3 to 5 class periods with some additional time for students to complete group projects. This lesson focuses on Billie Holiday's signature song, "Strange Fruit," a protest song Lewis Allen (Abel Meeropol) wrote in 1938 about the ongoing and intransigent problem of lynching in the American South. After asking students to assess the role music plays in their own lives, the lesson introduces some background information about lynching. The bulk of the lesson is document-based. Working in small teams, students analyze a variety of primary source materials related to lynching (news articles, letters written to or written by prominent Americans, pamphlets, broadsides, etc.) in order to assess the effectiveness of the anti-lynching campaign spearheaded by African-Americans. The information each team culls from the documents is then placed on a large class timeline.

Black History Month 2019 Worksheets Not ready to purchase a subscription? Click to download the free sample version Download sample Download This Sample This sample is exclusively for KidsKonnect members!To download this worksheet, click the button below to signup for free (it only takes a minute) and you'll be brought right back to this page to start the download! Sign Me Up MLK's Selma march captured by Stephen Somerstein's lens 18 January 2015Last updated at 19:18 ET Student newspaper editor Stephen Somerstein travelled to Alabama to see Martin Luther King, Jr Some of the most memorable news imagery of the post-war years came from the struggle for black equality, when photojournalism doubled as iconography. So shocking were the front page pictures from Birmingham, Alabama, in the spring of 1963 of police German shepherd dogs tearing at the clothes and flesh of young protesters that it roused public support for the landmark 1964 Civil Rights Act that dismantled segregation in the south. So grotesque was the sight of a column of civil rights protesters being bludgeoned by state troopers in Selma, Alabama, on what became known as "Bloody Sunday" that pressure for a new voting rights act became irresistible. Police brutality has often been the precursor to sweeping racial reform.