Esther Perel: The secret to desire in a long-term relationship 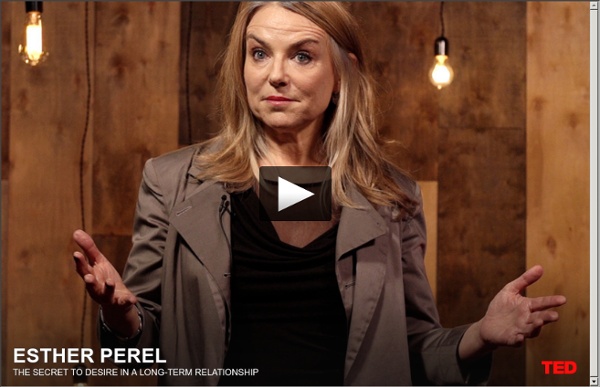 World Economic Forum - The Re-emergence of Europe The Re-emergence of European e-Book by Klaus Schwab In his new book, The Re-emergence of Europe, World Economic Forum Founder and Executive Chairman Klaus Schwab examines the events that have led to Europe’s current challenging political and financial climate. By looking at potential solutions through social, political and economic lenses, the book suggests likely outcomes to what Europe will look like in the future. Drawing on a career spanning five decades of change in European and world affairs, Professor Schwab looks beyond the short-term to consider the long-term implications that global trends and challenges will have on the region.

Intelligent Viewing: 100 Most Informative Video Collections on the Web Whether you’re a seasoned professional, in search of a new hobby, or a student looking for new material to help you study, watching online videos can be an effective method for learning something new. Videos are often more personal than text-only websites, and through partnerships with top universities and media outlets, they allow you access to some of the most exclusive events and lecture series in the world. Below you’ll find 100 informative and inspiring video collections for business, leadership, science and technology, the arts, language learning, news analysis, and more. General

Life After College by Jenny Blake Written by Melissa Anzman Impatience is a virtue… said the overly ambitious employee with their eyes set on their next move. Ambition is a great characteristic to have, especially early on in your career. Big businesses risk losing out to social enterprises unless they adapt A gathering of sustainability leaders hosted by Sir Richard Branson and Jamie Oliver has been warned that big businesses will be swept aside by emerging social enterprises unless they start changing their business models and contribute more to society. Boudewijn Poelmann, who founded the hugely successful Dutch Postcode Lottery, which now operates in Sweden and the UK, said that many major businesses would disappear over the next 20 years, to be replaced by emerging social enterprises, unless they took off their blinkers and responded to the environmental and social challenges the world is facing. "Small companies that are passionate about creating change will take over if big companies do not adapt," he said. "We already see that with energy, with so many small companies producing sustainable clean energy. The big companies are already starting to feel they are losing out."

500 Free Movies Online: Great Classics, Indies, Noir, Westerns & More Advertisment Watch 1,150 movies free online. Includes classics, indies, film noir, documentaries and other films, created by some of our greatest actors, actresses and directors. The collection is divided into the following categories: Comedy & Drama; Film Noir, Horror & Hitchcock; Westerns (many with John Wayne); Martial Arts Movies; Silent Films; Documentaries, and Animation. We also have special collections of Oscar Winning Movies and Films by Andrei Tarkovsky and Charlie Chaplin. Creative Gibberish Divergent thinking – more than a mere tool – is a technique very commonly used on creative activities because it allows us to expand our brains a little bit, by looking for new opportunities and ways of getting things done. So, from the problem – or whatever triggers your creativity – to the solution, instead of taking obvious steps and walking on a straight line, you force yourself to see different aspects of the situation, using unusual points of view, no matter how abstract of absurd they seem at the first place. This can be done by allowing everyone to think more freely while working on the task, gathering ideas that have the slightest relation to the problem itself rather than looking straight for a practical solution. Though it might sound like a waste of time, many corporations have found appealing answers to their problems by using such method.

The Divergent Thinker by Dr. Lovecky Divergent thinkers can be exceptionally creative. If the ability to think divergently is related to being creative, then all creative people are divergent thinkers, but not the other way around. It's the ability to direct the divergent ideas into something else that makes a person creative. Creativity is not just making something though. It can also be the process of enabling others to see one's vision of how things ought to be. The Nature of Ambition az said... well, that's so true. Soemtimes though, it's not due to ambition. Things just get bigger and bigger until you can't handle them. The important thing is always: do what you love Food security needs systemic change – Blog Food security needs systemic change I don’t know about you, but the closest I ever got to a Rubik’s Cube, shortly after it was first launched in 1974, was to handle one in a toy store. For me, it seemed insoluble – and many assumed it was, until persistent cubers discovered not just one way to crack the puzzle, but many.