UNDERSTANDING ANATOMY: part I by FOERVRAENGD on deviantART 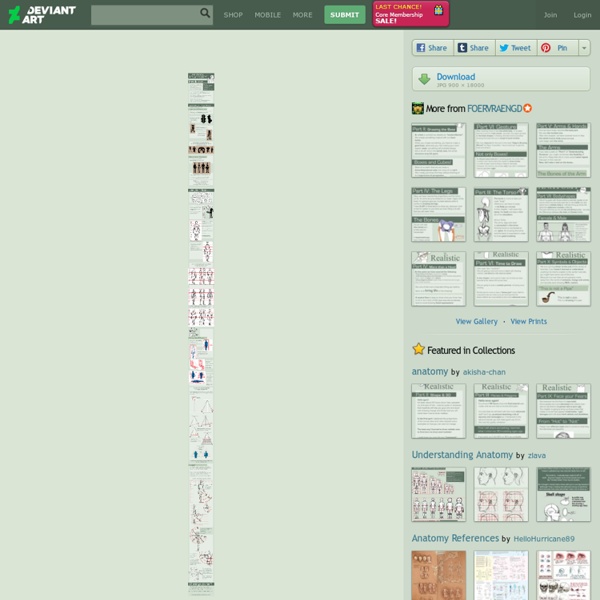 Learn to Draw People - Profile Problems There are three common ways that the portrait is drawn: Profile, Straight On, and Three Quarters. We'll look at each view in turn. First, let's look at the human head in profile. The profile is when the subject is looking left or right so that only one side of the face is visible. Many people feel that the profile is the easiest of the three views to draw because the facial features are very minimized in relation to the rest of the head. You're only dealing with one eye instead of two, there's also only one ear, and half a nose and mouth. Here's an ancient example of a profile. The two biggest errors are the eye and the ear. Measuring features on the face to get them in proper proportion is really important because each person's face is unique, and has unique proportions. Even though each face is unique unto itself, there are still some general guidelines to help you with proper proportion.

How to Draw Hair, Part 1 Looking back at my tutorials on drawing the head, I realized that I covered individual features, but completely left out hair. This tutorial will is split into 3 parts: The Basics, Types of Hair, and a Step by Step drawing. I’ll start this first part of the series with common mistakes that I see all the time. Common Mistakes when Drawing Hair Forgetting about the volumes This is the most common mistake I see from newer students. Too Much Texture This one is similar to the first, but this can still happen even if one pays attention to the volumes. Impatience – Bad Design There are so many random little shapes in hair, that good design is a necessity. Sharp Outlines I’m referring the the outer edge between the hair and background and also the connection between hair and skin. Consider the Form Underneath the Hair Spherical Skull Most hair styles you will draw will be affected by the skull underneath. The groups of hair wrap around the form underneath and inherit the same light patterns. Shadow

How to Draw a Human Head: 13 Steps Edit Article Forward Facing HeadProfile Human Head Edited by James Quirk, Tom Viren, Jack Herrick, Zack and 61 others Drawing the human head is easier if were to draw it in profile or side view. Ad Steps Method 1 of 2: Forward Facing Head a Human Head Step 1.360p.mp4 00:00 00:15 00:15 spaceplay / pauseescstopffullscreenshift + ←→slower / faster (latest Chrome and Safari)←→seek . seek to previous 12…6 seek to 10%, 20%, …60% 1Start by drawing three oval shapes, one large one and 2 smaller ones on the left and right side of the large oval. Method 2 of 2: Profile Human Head Video Tips Try to draw a bit lightly. you can always fine out the lines when you are finished and happy with your work. Warnings Eyes and Freckles The color pencil drawings of Amy Robins. Artwork © Amy Robins Link via Life is a Danceable Tragedy

Female poses chart by Aomori on deviantART Learn to Draw Expressively - Make Your Drawings Come to Life Male poses chart by Aomori on deviantART 9 Very Common Figure Drawing Mistakes, And How to Avoid Them Over the last twenty-five years I have spent my fair share of time drawing and studying the human figure. As a result, I’ve come across several (actually, nine) common figure-drawing mistakes over and over again. Like any other art process, figure drawing is a fluid activity and impossible to pin down with exact rules—but if your goal is to create a more convincing life drawing, then these next few ideas will certainly help. Here are the nine common figure-drawing mistakes, along with their solutions: Mistake #1 – Drawing without a goal in sight More often than not, people immediately begin sketching without establishing some kind of intention in their mind first. Solution: Pause for a moment before beginning your drawing and to look at what you see in front of you. Mistake #2 – Failing to keep the figure on the page It’s always shame when heads, arms or feet get unintentionally cut out of a drawing, just because the artist has run out of room on the paper.

Gripping Tutorials on How to Draw Hands Sharebar The human hand, for some of us, is one of the most challenging things to master drawing. It is important especially for those who are serious about pursuing a career in drawing. Apart from being the primary focus of a character’s actions, the hand may also serve as one of the key elements that could make the emotions and mood of a character apparent through hand gestures. As someone who has been drawing for the rest of his life, I had my fair share of drawings with the character’s hands somehow hidden from view just to hide the fact that I can’t draw them. Just click on each tutorial to go to the artist’s page and download the full size. Mini Hand Tutorial by nk-chan Clawed Hand Tutorial by Mytherea Drawing Hands by Paperwick Hand Tutorial 2 by Qinni -Hands Tutorial- by odduckoasis Hands Tutorial by JohnYume About maca Hello, my name is Karlo Macariola.

Big Time Attic: Cartooning Tips and Tricks: Crosshatching Crosshatching is the layering of planes of parallel lines on top of each other in order to create a gradient or texture in a drawing. Crosshatching has an "old-fashioned" stigma, probably for good reason: drawing lines side-by-side, and then on top of each other, is a great solution to a problem inherent in pen & ink drawing and printmaking: How do you make a drawing tonal if all you have to work with is black and white? With digital tools at our disposal, as well as relatively new products like Zipotone, Craftint and DuoShade, it's easy to see why crosshatching isn't considered cutting edge. However, I don't personally believe that a technique in itself can be old-fashioned; I think that comes out of how the artist uses the technique. Below is a primer on crosshatching for the beginner or for those who want to hone their craft. Professionals -- we'd love to hear your advanced tips and tricks in the comments! Styles of Crosshatching1) Tight, accurate lines. Consistency

How to Draw Lips For a video version of this tutorial visit www.proko.com/how-to-draw-lips-anatomy-and-structure This tutorial is a continuation of How to Draw the Head from Any Angle. I will cover the basic forms of the mouth, some anatomical information, and the key information about the minor planes. At the end, I will show a step by step drawing of the lips. Basic Forms One of the most overlooked ideas of the mouth is the cylindrical tooth cylinder underneath. You can see here how this inflated cylinder affects the surface forms of the lips: Major Planes Anatomical Information I won’t go into too much detail about all the muscles of the lips and their functions because that’s not the intention of this tutorial. is a great resource for anatomy. The red portion of the lips and the part directly above and below is called the orbicularis oris. Minor Planes The Red Portion of the Lips The top lip has three forms and the bottom lip has two. The forms of the lower lip are usually fuller then the upper lip. 5.

How to Draw the Nose Update 09-26-2012 – Above is a video version of this tutorial. For more video tutorials visit Proko.com and subscribe to the newsletter In this tutorial I will go over the structure of the nose and give detailed information about the bridge, ball, and nostrils of the nose. At the end, I will show a step by step of a nose drawing. The Major Planes When drawing the nose, I’ll usually start by indicating the 4 major planes – top, 2 sides, and bottom. Anatomical Information I think the anatomical shapes in the nose are really interesting. The Minor Planes It’s important to memorize the subtle plane changes in all the different part of the nose. Minor Planes of the Bridge The Glabella is shaped like a keystone. Minor Planes of the Ball The ball of the nose isn’t perfectly round, but has very distinct plane changes. Minor planes of the Nostrils The nostrils, also called wings, curl under themselves similar to the septum. Drawing the Nose 4. Made a video version of this tutorial.