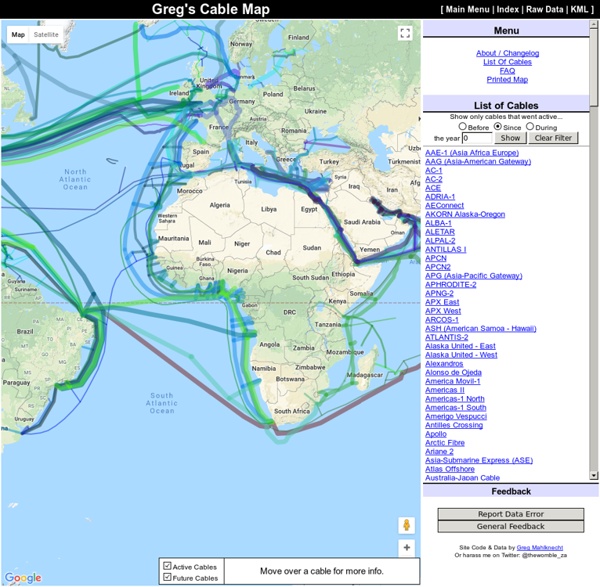 Light and illumination - DIY In this article you will find out why the photographic studios do not use the fluorescent lighting, as well why LEDs have not taken over the world yet, and has it been worth to use them for street lighting. Let's go! Color and spectrum We all know that our eyesight is primitive and ternary: we have three types of color receptors, such as red, blue and green. However, the life is more complicated as usual, and the color is determined by the length of wave / energy of a light quantum.

Researchers break bandwidth record for data communication using laser-based visible light (Phys.org)—Cell phones and Wi-Fi devices typically transmit data using radio waves, but as the demand for wireless data transfer increases, congestion in the radio spectrum is expected to become more of a problem. One way to solve this problem is with visible light communication (VLC), a technology that uses visible light rather than radio waves for data transmission. VLC uses lasers or LEDs that look just like traditional lights, but by rapidly switching on and off faster than the eye can see, the light transmits data in binary code to a receiver. Why I'm Learning Node As many (if not all) of you know, I'm a Python guy. I program every single day, and most days, that involves using Python. I write Django code for fun and profit, and also do a fair amount of "raw" Python coding (no frameworks). Unfortunately, while I do a lot of kick ass back end coding, I don't often get a chance to practice my front-end kung fu. Since I'm fairly knowledgeable about the back end stuff I work on (telephony services, web services, etc.), it doesn't often make sense for me to also build the front end code (I'm looking at you: HTML, CSS, Javascript). As a result of this lack of front-end coding practice, I suck at it.

ADATS Could Assist X-planes With Large, Super-Fast Data Transmission Two pilots who credit a NASA-supported technology with saving one of their lives during a May training exercise mishap paid a visit to NASA Armstrong Flight Research Center in Edwards, California, to meet with some of the very engineers responsible for its development. A United States Air Force Major and F-16 flight instructor, and a foreign Air Force pilot student, spent an afternoon at the NASA center, as guests during the center’s 2016 NASA Honor Awards. This video, recently declassified, shows the heads-up-display, or HUD, of an F-16, in which the student pilot experienced a g-induced loss of consciousness. The pilot credits the Automatic Ground Collision Avoidance System, developed in-part by NASA, with saving both the aircraft and his life. Credits: NASA Armstrong Video Auto-GCAS is an aircraft software system that activates upon detecting a collision course with the ground.

The JavaScript Playground Backbone.js is a framework that lets us structure our applications using a pattern similiar to MVC (technically Backbone is not pure MVC as the C stands for "Collection"). However, Backbone is a powerful system to use when creating apps that are beyond very basic. When passing & manipulating a lot of data, you should consider using something like Backbone. Since launching this blog I've had a lot of people ask me about Backbone. Although there are a lot of very good resources out there, I have struggled to get to grips with it myself and from the requests I've had I'd suggest a lot of others have too. So, I sat down to create a sample application with Backbone, and in this tutorial - which will span at least 3 parts - we will create a very simplified shopping cart application, with Backbone.

Ginger Tech Stack Posted by Peter in Django, Ginger For our latest product, Ginger, we wanted to marry the real-time functionality we needed with the traditional Django stack we know and love. After some false starts and falling on our faces in the beginning, we ended with a stack we’re happy with and think will serve us well moving forward. Back-end This is our bread-and-butter. Crawl a website with scrapy - *.isBullsh.it In this article, we are going to see how to scrape information from a website, in particular, from all pages with a common URL pattern. We will see how to do that with Scrapy , a very powerful, and yet simple, scraping and web-crawling framework. For example, you might be interested in scraping information about each article of a blog, and store it information in a database.

Modern Web Development So, you’ve added a breakpoint, you refreshed the page, and now your script is paused. Now, the fun begins. The first thing of interest in the sidebar is “Watched Expressions”. If you care about the value of some expression (Say “MyApp.someController.property === ‘some value’”), then adding that as a watch expression will let you keep an eye on it without having to type it over and over in the console. How to write a simple interpreter in JavaScript Download source - 2.9 KB Writing interpreters and compilers Writing an interpreter or a compiler is one of the most educational tasks in programming because you can become familiarized with the details of the code interpretation and evaluation process. You can obtain much deeper knowledge of what sorts of things are going on behind the scenes and gain some insights into the decisions behind language design.

The JavaScript Playground Unless you've been living under a rock for the past 12 months or so, you've probably heard of Node.js. Simply put, Node is JavaScript on the server. Node.js is a platform built on Chrome's JavaScript runtime for easily building fast, scalable network applications. Node.js uses an event-driven, non-blocking I/O model that makes it lightweight and efficient, perfect for data-intensive real-time applications that run across distributed devices.

Python Iteration Created 24 April 2012, last updated 19 March 2013 This is a presentation I gave at PyCon 2013. You can read the slides and text on this page, or open the actual presentation in your browser (use right and left arrows to advance the slides), or watch the video: A talk for PyCon 2013. This talk is billed as Beginner, and sounds like a beginner topic, but I prefer to think of it as Fundamental. Plenty of expert Python programmers aren't making enough use of the tools I'm going to talk about. The Anatomy of Search Technology: blekko’s NoSQL database This is a guest post (part 2, part 3) by Greg Lindahl, CTO of blekko, the spam free search engine that had over 3.5 million unique visitors in March. Greg Lindahl was Founder and Distinguished Engineer at PathScale, at which he was the architect of the InfiniPath low-latency InfiniBand HCA, used to build tightly-coupled supercomputing clusters. Imagine that you're crazy enough to think about building a search engine. It's a huge task: the minimum index size needed to answer most queries is a few billion webpages. Crawling and indexing a few billion webpages requires a cluster with several petabytes of usable disk -- that's several thousand 1 terabyte disks -- and produces an index that's about 100 terabytes in size.

Introduction to Using Chart Tools - Google Chart Tools Google Charts provides a perfect way to visualize data on your website. From simple line charts to complex hierarchical tree maps, the chart gallery provides a large number of ready-to-use chart types. The most common way to use Google Charts is with simple JavaScript that you embed in your web page.