5 Invasive Plants You Can Eat 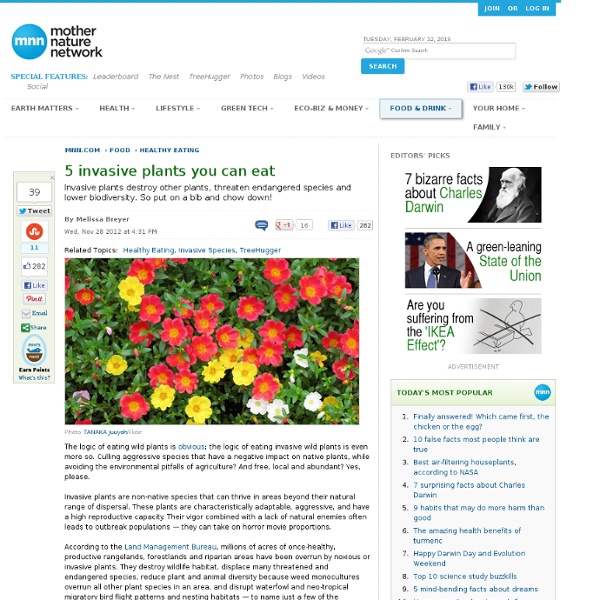 The logic of eating wild plants is obvious; the logic of eating invasive wild plants is even more so. Culling aggressive species that have a negative impact on native plants, while avoiding the environmental pitfalls of agriculture? And free, local and abundant? Yes, please. Invasive plants are non-native species that can thrive in areas beyond their natural range of dispersal. According to the Land Management Bureau, millions of acres of once-healthy, productive rangelands, forestlands and riparian areas have been overrun by noxious or invasive plants. So what can we do? 1. Native range: Old World, probably Southeast Asian in origin Invasive range: Throughout North America Habitat: Rocky bluffs, barnyards, gardens, sidewalk cracks, disturbed areas; widely found in city lots. Because of it is a prolific producer of seeds, common purslane (pictured above) can rapidly take over warm, moist sites. 2. The pretty leaves are alternate, egg shaped; stems are hollow. 3. 4. 5. Related:  Survival Food, Storage, Cooking

Top 10… Foods To Forage - Green Living Thanks to modern agricultural methods, foraging – once a part of the majority’s daily life – has faded away, replaced by regular trips to the supermarket instead. Recently, however, there has been a revival of interest in raiding nature’s larder thanks to increased awareness of the health benefits of wild food, not to mention the TV exploits of Bear Grylls, Ray Mears and co. But it foraging is about more than just food. It gets us out into the countryside and helps to cultivate an intimate appreciation of nature, re-establishing a connection severed by modern urban life. But for the beginner, foraging should come with a health warning as it’s easy to mistake a deadly fungus for an innocent field mushroom. While wild food is generally good for you, taking precautions and getting some tips and advice from experienced foragers is essential. Mushrooms Neither animal nor vegetable, mushrooms are a type of fungi and the largest living organisms on Earth, some reaching three miles in length.

iPhone App Find Free Fruit: NeighborhoodFruit.com Introducing Find Fruit, your mobile companion of NeighborhoodFruit.com! Locate fruit trees on public land on the go! Looking for local blackberries for a pie? Want to smell fruit blossoms on a romantic walk? Interested to learn fun facts about common edible plants? Want to find fruit on the go in many metropolitan areas nationwide? Find Fruit unlocks cities, enabling you to explore in new ways. Features: Location of thousands of trees on public land nationwide on a standard Google Map. Requirements: iPhone OS2.0 or later Credits: Geocoding services provided by USC WebGIS. Available at iTunes. Study Finds Greening Vacant Lots Reduces Overall Crime slideshow bob/CC BY-SA 2.0 Green vacant lots make neighborhood residents feel safer while reducing overall crime, according to a new study from the Perelman School of Medicine at the University of Pennsylvania. The study, published in the journal Injury Prevention, found its results by using randomized trial design to examine the impact of vacant lot greening. Two clusters of lots were selected for testing. Vacant Versus Greened Lots Twenty-one of the residents living near either the vacant or the greened lots were interviewed before and after the fact. "Vacant lot greening changes the physical environment of a neighborhood from one that may promote crime and fear to one that may reduce crime and make people feel safer," said lead author Eugenia C. Crime Rates Reduced After greening, residents felt safer and more comfortable in their environment. Again, Science Daily: [T]he research team analyzed police reported crime data from three months before and three months after the greening.

9 Common Edible Garden Weeds All too often, homeowners and gardeners wage war in their lawns and gardens against the plants that grow incredibly well there, but that aren't intentionally planted, and many times, the justification for these battles all comes down to the words we use to describe them. When we buy and plant packets of common flower, vegetable, or herb seeds, we spend a lot of time, energy, and water in our efforts to get those seeds to germinate and grow, and take pride in our green thumb and homegrown food supply. But when a plant that we identify as being a weed is found growing in our lawn or garden, out comes the trowel and hoe (or for the ruthless and impatient gardeners, weedkillers such as RoundUp), and we may spend the entire growing season keeping these opportunistic and resilient plants at bay, in order to have neat and tidy garden beds and uniform lawns. 1. 2. ZooFari/CC BY 3.0 3. Cliff/CC BY 3.0 4. Wendell Smith/CC BY 3.0 5. Calin Darabus/CC BY 3.0 6. Leslie Seaton/CC BY 3.0 7. 8. 9.

Clean Your Cooking Gear with Wood Ashes Using wood ashes as a cleaning agent makes alot of sense: they are readily available, free, and relatively safe for the environment when compared to many types of soap. In this Survival Topic we will cover this very handy method for the outdoorsman to clean his dirty dishes. Re-purpose Natural Materials When it comes to wilderness survival, large scale disaster, or even just camping outdoors we often try to do things in the same manner as we are accustomed to doing them at home. Solutions are available to most outdoor and survival problems, if only we have the knowledge and inventiveness to use them. Often it is simply a matter of key pieces of information missing in our expertise, which once provided suddenly gives us a powerful new way to accomplish necessary tasks. Consider the daily chore of cleaning your mess kit after a meal. Easy Access to Soap is Limited In a disaster or wilderness survival setting you will often lack soap with which to wash your camp cooking gear and mess kit.

Turning Vacant Lots into Profitable Urban Farms in Minnesota © Stone's Throw Urban Farm The rise of urban gardening has been a major theme on TreeHugger in the past few years, and efforts to bring fresh and local produce to city dwellers have become sophisticated and ambitious. In Minnesota, a group of young adults is taking abandoned lots around the Twin Cities and converting them into vibrant, profitable micro-farms. Full Disclosure: Alex and Emily of Stone's Throw are friends of mine from college. Stone's Throw Urban Farm is a combination of three separate urban farming initiatives. They began by biking around Minneapolis and St Paul to find vacant lots, pitching the idea of planting crops to their owners. Stone's Throw will sell the vegetables through a CSA, at the local Mill City Farmers Market, and through some wholesale accounts. The goals are to strengthen the local food system, provide a healthy and affordable source of nutrition to the community and turn unused city space into something beautiful and productive.

Food Foraging: Find Wild Edible Plants - Mother Earth News We owe a lasting debt of gratitude to the desperate soul who “discovered” the oyster or stewed that first possum. In the early, hit-or-miss days of foraging, our ancestors learned the hard way about the laxative properties of the senna plant, and to eat only the stems of rhubarb and not the poisonous leaves. Through trial and the occasional fatal error, we sorted the edible from the inedible, the useful from the harmful. After World War II, when American agriculture was fully conquered by industry and supermarkets full of frozen foods popped up across the land — yes, like weeds — foraging came to be regarded as uncouth, probably unhealthy and certainly out of step with modern times. Why then, a half-century later, do we find purslane — a vigorous, succulent “weed” once routinely cursed by gardeners — on the menu of nearly every fine dining restaurant in the country? Kerri Conan blogs for The New York Times, and keeps a sharp eye on food trends. Learning the Art of Food Foraging 1. 2. 3.

DIY: Beer Can Into Camping Stove You can whip one of these up in a matter of minutes. They’re so easy to make and they work really well. First find yourself some scissors and a beverage can and then start the above video. This is an inexpensive way to be prepared in the event of a power outage as these stoves give off a lot of heat and have the ability to cook large meals. They also make great holiday gifts for friends and family. For more great repurposing ideas, check out Repurposing 24/7 Image: Vimeo camp stoveDIYRepurposing Related Posts « After Reading This, You’ll Never Look at a Banana in the Same Way Again The Remedy For Everything But Death »

Permaculture - PermaWiki Permaculture is a design system which aims to create sustainable human habitats by following nature's patterns. The word 'permaculture', coined by Australians Bill Mollison and David Holmgren during the 1970s, is derived as a contraction of permanent agriculture, or permanent culture. The idea of permaculture is considered among the most significant innovations developed by Australians in the century since Australian federation [1]. I guess I would know more about permaculture than most people, and I can't define it. ... Nevertheless, today permaculture can best be described as an ethical design system applicable to food production and land use, as well as community building. Origins Edit In the mid 1970s, two Australians, Dr. The term permaculture initially meant "permanent agriculture" but this was quickly expanded to also stand for "permanent culture" as it was seen that social aspects were an integral part of a truly sustainable system. Influences Edit The work of Howard T. Core values