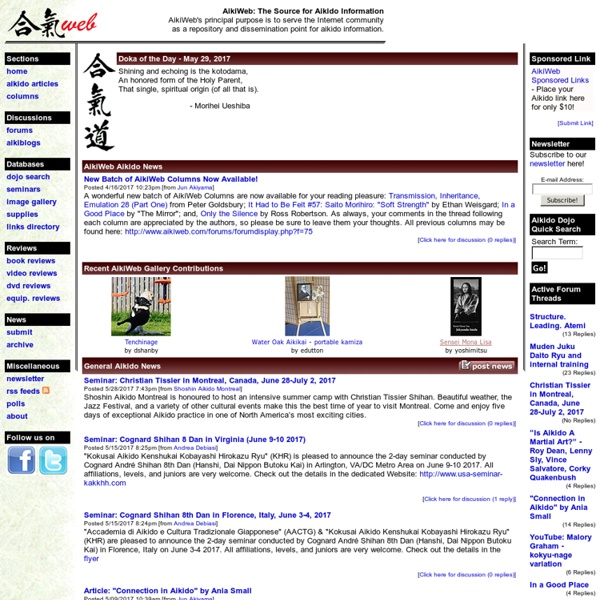 Aikido Journal Blog Parkour Parkour is a non-competitive activity, which can be practiced alone or with others. It can be practiced in any location, but is usually practiced in urban spaces.[10][11] Parkour involves seeing one's environment in a new way, and imagining the potentialities for movement around it.[12][13] Developed in France, primarily by Raymond Belle, David Belle, and Sébastien Foucan during the late 1980s,[14][15] Parkour became popular in the late 1990s and 2000s through films, documentaries, and advertisements featuring these practitioners and others.[4] Parkour's training methods have inspired a range of other activities, including freerunning and l'art du déplacement. Although their creators define them as separate activities, practitioners and non-practitioners alike often find it difficult to discern the differences between them. Etymology[edit] "Le parcours" was the French phrase passed down to David Belle from his father Raymond Belle. History[edit] Philosophy and theories[edit] Movement[edit]

International Aikido Federation (IAF) - Home The Aikido FAQ Martial arts videos on Youtube | MartialArtsTube.net Morihei Ueshiba Morihei Ueshiba (植芝 盛平, Ueshiba Morihei?, December 14, 1883 – April 26, 1969) was a famous martial artist and founder of the Japanese martial art of aikido. He is often referred to as "the founder" Kaiso (開祖?) or Ōsensei (大先生/翁先生?), "Great Teacher". The son of a landowner from Tanabe, Ueshiba studied a number of martial arts in his youth, and served in the Japanese Army during the Russo-Japanese War. Ueshiba moved to Tokyo in 1926, where he set up the Aikikai Hombu Dojo. Early years[edit] Morihei Ueshiba was born in Tanabe, Wakayama Prefecture, Japan on December 14, 1883, the fourth child (and only son) born to Yoroku Ueshiba and his wife Yuki.[1][2]:5–10 Morihei was raised in a somewhat privileged setting. At the age of six Ueshiba was sent to study at the Jizōderu Temple, but had little interest in the rote learning of Confucian education. In 1903, Ueshiba was called up for military service. Ueshiba is known to have studied several martial arts during his early life. Hokkaidō[edit] ...

Aikido Journal Kuzushi The wooden sword is no longer an effective weapon since the attacker's balance has been compromised Kuzushi (崩し:くずし?) is a Japanese term for unbalancing an opponent in the Japanese martial arts. The noun comes from the transitive verb kuzusu (崩す), meaning to level, pull down, destroy or demolish.[1] As such, it is refers to not just an unbalancing, but the process of putting an opponent to a position, where his stability, hence the ability to regain uncompromised balance for attacking is destroyed. In judo, it is considered an essential principle and the first of three stages to a successful throwing technique: kuzushi, tsukuri (fitting or entering) and kake (execution). Kuzushi is important to many styles of Japanese martial arts, especially those derived from, or influenced by, Ju Jutsu training methods, such as Judo, Ninjutsu, Aikido, Goju-ryu karate and Wadō-ryū karate.[2] The methods of effecting kuzushi depend on maai (combative distance) and other circumstances. Judo[edit]

The Aikido FAQ: Biography of Morihei Ueshiba Morihei Ueshiba, 1883 - 1969 Morihei Ueshiba The founder of Aikido, Morihei Ueshiba, was born on December 14, 1883, to a farming family in an area of the Wakayama Prefecture now known as Tanabe. Among five children, he was the only son. From his father Yoroku, he inherited a samurai's determination and interest in public affairs, and from his mother an intense interest in religion, poetry and art. To counteract his son's daydreaming, Yoroki would recount the tales of Morihei's great-grandfather "Kichiemon," said to be one of the strongest samurai of his day, and encouraged him to study Sumo wrestling and swimming. School seemed to bore Morihei as his nervous energy needed a more practical outlet. After regaining his health during the Russo-Japanese War period, he decided to enlist in the army. Morihei returned home to the farm. It was during this time in Hokkaido that he met Sokaku Takeda, grandmaster of Daito-ryu Aiki Jutsu. In 1931, the "Kobukan" was finished.

Ecole Française Judo/Jutsu List of martial arts There are a large number of distinct styles and schools of martial arts. Sometimes, schools or styles are introduced by individual teachers or masters, or as a brand name by a specific gym. Martial arts can be grouped by type or focus, or alternatively by regional origin. This article focuses on the latter grouping. For hybrid martial arts, as they originated from the late 19th century and especially after 1950, it may be impossible to identify unique or predominant regional origins. A large portion of traditional martial arts can be categorized as folk wrestling (see the separate article), although in some cases a folk wrestling style and a modern combat sport may overlap or become indistinguishable from each other once the sport has been regulated. Africa[edit] Styles of stickfighting Folk wrestling Bare knuckle boxing Others Engolo (Angola) The Americas[edit] Mixed martial arts Barbados Bajan stick licking Bolivia Tinku Brazil Canada; Colombia Cuba El Juego de Maní Peru Bakom/Vacon Trinidad and Tobago

The traveling Aikidoka's guide to practice at the Aikikai Hombu Dojo | Articles and essays about Aikido | Resources on the practice of Aikido Please note that this is an on-going work and if you have any suggestion or remark to improve it, please feel free to comment at the bottom of the article. Training at the Aikikai Hombu Dojo is great fun and can be a life-changing experience (it certainly was for me) so I hope that this article will give you the answers to your questions or perhaps achieve to convince you to make the trip. So hopefully see you there on the tatami N.B.: I have made a map of all the main locations at the end of this article. What is the Aikikai Hombu Dojo? the Aikikai hombu dojo building The Aikikai Foundation (Aikido World Headquarters) (財団法人合気会 Zaidan Hōjin Aikikai) was created in 1940 by second Doshu Kisshomaru Ueshiba, the son of O Sensei Morihei Ueshiba. Accommodation in Tokyo Tokyo by night Hombu Dojo does not have any facilities to provide accommodation to traveling Aikidoka and therefore, your place of residence will be your own responsibility. keikogi laundry, or take a nap between classes. Hotels Rentals

Aikidoblog.net Muay Thai Muay Thai (Thai: มวยไทย, RTGS: Muai Thai, [mūaj.tʰāj] ( )) is a combat sport from the muay martial arts of Thailand that uses stand-up striking along with various clinching techniques.[1][2][3][4] This physical and mental discipline which includes combat on foot is known as "the art of eight limbs" because it is characterized by the combined use of fists, elbows, knees, shins and feet, being associated with a good physical preparation that makes a full-contact fighter very efficient.[5] Muay Thai became widespread internationally in the twentieth century, when practitioners defeated notable practitioners of other martial arts.[6] A professional league is governed by the World Muay Thai Council.[7][8] Etymology[edit] The word Muay derives from the Sanskrit Mavya which means "to bind together". History[edit] Praying before the match Muay Thai championship boxing match in Sterling, VA 19th century[edit] Modernization[edit] Today, there are thousands of gyms spread out across the globe. [edit]