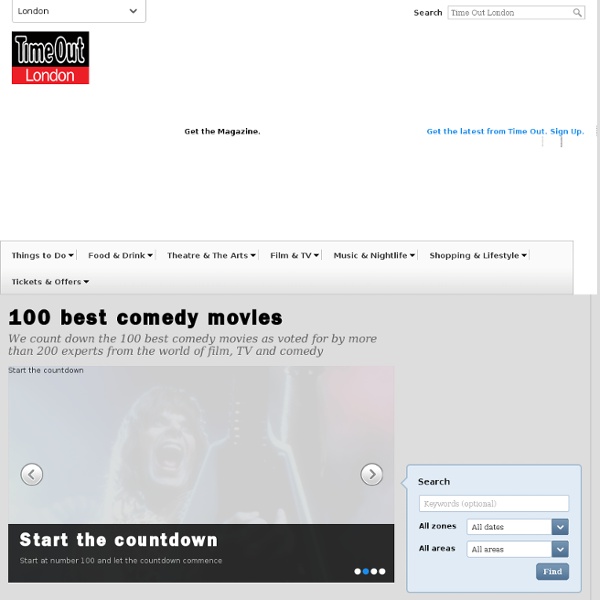 Here's the 100 best comedy movies as chosen by more than 200 people whose job it is to make you laugh. We spoke to dozens of comedy writers, comedy directors, comic actors and stand-up comedians – including Dan Aykroyd, Richard Curtis, Edgar Wright, Kim Noble, Stephen Merchant, Jo Brand and many, many more – and asked them to share with us their favourite comedy films of all time. Can you guess which film emerged as the number one choice? UPDATE: Tell us the comedy movie you think should have made the list and we'll print the best ten in a future issue of Time Out magazine. Make your suggestions on our messageboards. By Tom Huddleston, David Jenkins, Adam Lee Davies, Derek Adams, Edward Lawrenson, Wally Hammond, Ben Walters, Gabriel Tate and Phil Harrison

The 100 Best Films Of World Cinema | 100. Night Watch | Empire | www.empireonline.com - StumbleUpon From Brazil to Japan to France and Senegal, from Neo-Realism to Dogme to J-horror, we've compiled a list of the very best films not in the English language (note: features, not documentaries). So rustle up some sushi, strike up a gauloise and make sure you've locked your bicycle as we count down the top 100 world cinema movies... 100. Night Watch Year: 2004Country: RussiaDirector: Timur Bekmambetov It's Buffy meets The Matrix meets Blade! Hollywood remake? Stream Night Watch now with Amazon Video 99. Year: 1993Country: ChinaDirector: Yuen Woo-ping It's the Robin Hood story transferred to the Ch'ing Dynasty, helmed by Yuen Woo-ping, the martial arts director that would go onto create such western fighting spectaculars such as Kill Bill and The Matrix Trilogy. Hollywood remake? Buy Iron Monkey now on Amazon 98. Year: 1985Country: JapanDirector: Akira Kurosawa Akira Kurosawa was almost blind when he directed his biggest movie, in 1989, and yet it's possibly his most beautiful. Hollywood remake?

Download & Streaming : Moving Image Archive : Internet Archive Programs in&nbsp; TV News Archive for research and educational purposes. The programs allow users to search across a collection of television news programs dating back to 2009 for research and educational purposes such as fact checking. Users may view short clips, share links to customized short quotes, embed customized short quotes, or borrow a copy of the full program. ( 1 reviews ) Watch full-length feature films, classic shorts, world culture documentaries, World War II propaganda, movie trailers, and films created in just ten hours: These options are all featured in this diverse library! Many of these videos are available for free download. by Internet Archive Feature films, shorts , silent films and trailers are available for viewing and downloading. An analysis of news and public affairs independent from traditional corporate media is available from this diverse video library. Items included in the Television News search service. Miscellaneous collections of movies and videos.

25 Spectacular Movies You (Probably) Haven't Seen Pt. 2 Human Traffic Very unique comedy about the drug/club culture in the UK. Five friends ponder society, drug use and their own lives as they go about their usual weekend of snorting, smoking, popping, dancing and sex. The Matador Pierce Brosnan plays an assassin going through a mid-life crisis as he approached retirement. He’s like 007 on a spree of existential questioning. The Good, The Bad, And the Weird Two comical outlaws and a bounty hunter fight for a treasure map in 1940s Manchuria while being pursued by the Japanese army and Chinese bandits. Tucker and Dale vs. A group of college students go camping for the weekend and, through a series of unlucky events, begin thinking that the harmless Tucker & Dale (pictured above) are trying to kill them. New Kids Turbo An absolutely nutty movie from the Netherlands. Kiss, Kiss, Bang, Bang KKBB is a murder-comedy (?) Big Trouble Big Trouble is one of those movies where all of these different people end up intertwined at the end of the movie. Dr.

Into the White a Stark Tale of Enemy-Friendship Movie Review, Christian Reviews and Ratings DVD Release Date: June 25, 2013 Theatrical Release Date: April 12, 2013 (limited) & OnDemand Rating: R (for some language, and wartime violence) Genre: WWII drama Run Time: 1 hr., 40 min. Director: Petter Naess Cast: Florian Lukas, David Kross, Rupert Grint, Stig Henrik Hoff, Lachlan Nieboer What is it that makes fellow inhabitants of Planet Earth enemies with one another? It's an age-old question, one that actually had me harkening back to the 1985 Dennis Quaid-Lou Gossett film Enemy Mine, and one which director Petter Naess (Elling) does absolutely nothing new with in Into the White. But that doesn't mean the film is without merit or ideas to contemplate. Based on true events, Into the White (titled Cross of Honour in Europe) takes place in late April 1940, at the front end of World War II, in the snowy Norwegian wilderness. The cabin is uninhabited. All the archetypes are present, and they are fun to consider.

Watch Free Documentaries Online | Documentary Heaven 10 Foreign Movies Every Guy Should See We’re not quite sure why, but when we think of foreign movies we immediately think of French romance flicks. Pass. This is dumb since there are a ton of solid foreign movies for dudes. In fact, if you don’t mind a bit of reading with your movie watching, there are some kickass foreign films you really need to see. 1. You’ve probably seen some pretty great American style gang movies, but you’ve never seen a gang movie with the grittiness of City of God. 2. Some great movies have used prison as the main backdrop for the film (see: Shawshank Redemption), but few have utilized it and taken advantage of it like A Prophet. 3. Okay, technically this is three movies, but they’re all equally awesome so forgive us. 4. Why this movie works better in black & white, we couldn’t tell you, all we know is it does and it’s awesome. 5. Another film starring Vincent Cassel on the list (who you might also know from Black Swan), and another winner. 6. 7. For film buffs, Breathless is a must. 8. 9. 10.

The Stories Behind Hollywood Studio Logos You see these opening logos every time you go to the movies, but have you ever wondered who is the boy on the moon in the DreamWorks logo? Or which mountain inspired the Paramount logo? Or who was the Columbia Torch Lady? Let's find out: 1. In 1994, director Steven Spielberg, Disney studio chairman Jeffrey Katzenberg, and record producer David Geffen (yes, they make the initial SKG on the bottom of the logo) got together to found a new studio called DreamWorks. Spielberg wanted the logo for DreamWorks to be reminiscent of Hollywood's golden age. Hunt also sent along an alternative version of the logo, which included a young boy on a crescent moon, fishing. The DreamWorks logo that you see in the movies was made at ILM from paintings by Robert Hunt, in collaboration with Kaleidoscope Films (designers of the original storyboards), Dave Carson (director), and Clint Goldman (producer) at ILM. Photo courtesy of Robert Hunt - Thanks for the neat story, Robert! 2. 4. 5. Warner Bros. Warner Bros.

The 30 Best Films of the Decade We’re all in that humanistic mode of evaluating our lives – coming up on the end of the year and the last time a zero will be the third digit on our calendars. We’re all (from Variety to Cat Fancy) also waxing expert on what films were the best of the best of the best of the past ten years. Which is why there is an unnavigable sea of opinion polluting the internet right now. You may ask (since I’m forcing you to rhetorically), “How can giving your opinion be better than everyone else’s tepid version of an almost-arbitrary-seeming list?” I’m glad you asked. Neil and I anticipated this task back in October and began planning what would become far too much work for two people who essentially sit around watching Animal House all day. We then forcefully shoved that list into an algorithm that neither of us understood (which is why I got my Masters Candidate in Applied Mathematics Friend to construct it for us (and why we didn’t scoff when he charged us $20 and our Powder Blue DVD for it)). 30.

20 Great Documentaries To Watch on Netflix Instant (2012) Last year, we looked at 20 Great Documentaries to Watch on Netflix Instant, but as the movie service is constantly updating its offerings, we decided to update the list with 20 different documentaries that are available now. A handful of documentaries from last year’s list are still available as well: Restrepo, God Grew Tired of Us, Client 9, Exit Through the Gift Shop, The Wild and Wonderful Whites of West Virginia, No End In Sight and No Direction Home. 10. Cave of Forgotten DreamsDirector: Werner Herzog 3-D skeptics might have to rethink their stance after witnessing Werner Herzog’s stunning tour of the oldest cave drawings ever found.—Josh Jackson 9. 8. 7. 6. 5. 4. 3. 2. 1. 12 Early Short Films By Famous Hollywood Directors By Scott Meslow If last weekend's number one movie, Mama — in which two adopted children are beset by a malevolent creature they call Mama — sounds familiar, it may be because you first encountered the film in its original three-minute short form when it was released in 2008. (Watch the original short version of Mama below.) On the strength of the three-minute version, Guillermo del Toro (of Pan's Labyrinth fame) tapped director Andres Muschietti to expand the short into a full-length film of the same name. But Muschietti is hardly the first director to cut his teeth on self-produced shorts before moving up to a big directing gig. Here, 12 early short films by famous Hollywood directors. 1. As an NYU film student, Martin Scorsese made a series of well-received short films — including The Big Shave, a darkly satirical indictment of the Vietnam War — but the most accessible is this briskly paced short, which tells the story of a man who becomes obsessed with a picture on his wall. 2. 3.