How All 50 States Got Their Names 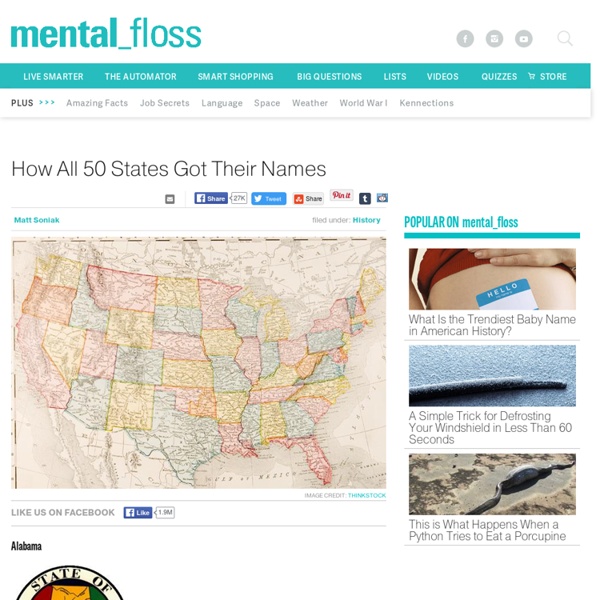 Alabama Before Europeans landed on American shores, the upper stretches of the Alabama River in present-day Alabama used to be the home lands of a Native American tribe called – drum roll, please – the Alabama (Albaamaha in their own tribal language). The river and the state both take their names from the tribe, that's clear enough, but the meaning of the name was another matter. Despite a wealth of recorded encounters with the tribe – Hernando de Soto was the first to make contact with them, followed by other Spanish, French and British explorers and settlers (who referred to the tribe, variously, as the Albama, Alebamon, Alibama, Alibamou, Alibamon, Alabamu, Allibamou, Alibamo and Alibamu) – there are no explanations of the name's meaning in the accounts of early explorers, so if the Europeans asked, they don't appear to have gotten an answer. An un-bylined article in the July 27, 1842 edition of the Jacksonville Republican put forth the idea that the word meant “here we rest.” Alaska

Guns, germs, and Steel: the fates of human societies Guns, Germs, and Steel, my best-known book, was published in 1997. It has been translated into 36 languages, including all the major languages of book publishing, as well as languages of small markets such as Estonian and Serbian. It won the 1998 Pulitzer Prize for General Non-fiction, plus numerous other prizes. I shall now summarize Guns, Germs, and Steel’s question, its answer, extensions and discoveries since its publication, unresolved questions, and criticisms. United States The United States of America (USA), commonly referred to as the United States (US), America or simply the States, is a federal republic[10][11] consisting of 50 states and a federal district. The 48 contiguous states and the federal district of Washington, D.C., are in central North America between Canada and Mexico. The state of Alaska is the northwestern part of North America and the state of Hawaii is an archipelago in the mid-Pacific. The country also has five populated and nine unpopulated territories in the Pacific and the Caribbean. At 3.79 million square miles (9.83 million km2) in total and with around 317 million people, the United States is the fourth-largest country by total area and third largest by population.

'Guns, Germs, and Steel' Reconsidered Guns, Germs, and Steel: The Fates of Human Societies has had the kind of impact that most scholarly authors can only dream about for their works. First published by W.W. Norton in 1997, the book won a Pulitzer Prize the next year for its author, Jared Diamond, a professor of geography at the University of California at Los Angeles. Almost immediately, the book sold much better than most serious works (more than 1 million copies) and started to turn up on college reading lists -- in courses on world history, anthropology, sociology and other fields. Citizen news: A democratic addition to political journalism Editor’s note: Herbert Gans is one of America’s preeminent sociologists, and some of his most notable work has come in examining the American news industry. His seminal 1979 book Deciding What’s News: A Study of CBS Evening News, NBC Nightly News, Newsweek and Time was born out of years spent in newsrooms, watching how the never-ending flood of human activity was distilled into the news. Here he argues for a new area of emphasis in political reporting for a democratic society — what he calls citizen news.

An Illustrated Guide to Space Maps Nebra Sky Disc, Germany, 1600 BC. (Photo: Rainer Zenz/WikiCommons CC BY-SA 3.0) With its patinated bronze background and shiny gold sun, moon and stars, the 3600-year-old Nebra Sky Disc is worth gazing at for its beauty alone. UNCOVERED: The Haunting 'Human Zoo' of Paris In the furthest corner of the Vincennes woods of Paris, lies the remains of what was once a public exhibition to promote French colonialism over 100 years ago and what we can only refer to today as the equivalent of a human zoo. In 1907, six different villages were built in the Jardin d’Agronomie Tropicale, representing all the corners of the French colonial empire at the time– Madagascar, Indochine, Sudan, Congo, Tunisia and Morocco. The villages and their pavillions were built to recreate the life and culture as it was in their original habitats. This included mimicking the architecture, importing the agriculture and appallingly, inhabiting the replica houses with people, brought to Paris from the faraway territories.

Monroe Doctrine (1823) The Monroe Doctrine was articulated in President James Monroe's seventh annual message to Congress on December 2, 1823. The European powers, according to Monroe, were obligated to respect the Western Hemisphere as the United States' sphere of interest. President James Monroe’s 1823 annual message to Congress contained the Monroe Doctrine, which warned European powers not to interfere in the affairs of the Western Hemisphere. Understandably, the United States has always taken a particular interest in its closest neighbors – the nations of the Western Hemisphere. Equally understandably, expressions of this concern have not always been favorably regarded by other American nations.

The Discoverers In "A Personal Note to the Reader" Boorstin writes, "My hero is Man, the Discoverer. The world we now view from the literate West...had to be opened by countless Columbuses. In the deep recesses of the past, they remain anonymous." The structure is topical and chronological, beginning in the prehistoric era in Babylon and Egypt. Themes[edit] The role of religion and culture is another recurring theme. USA Stretching across the continent of North America, the United States goes from the Atlantic Ocean in the east to the Pacific Ocean in the west. North of Mexico and south of Canada, it has the Gulf of Mexico on its south-eastern border. The US consists in addition of two more states that are not contiguous to (not touching the other parts) the main body of the United States. Hawaii is located in the middle of the Pacific Ocean; Alaska is on the northwest coast of North America, bordering Canada. Going clear across North America, the United States has a great variety of climates and landscapes, from temperate rainforest to desert, fertile plains to icy mountains. Quill's Quiz - 1100 Question US Mega Geography Quiz