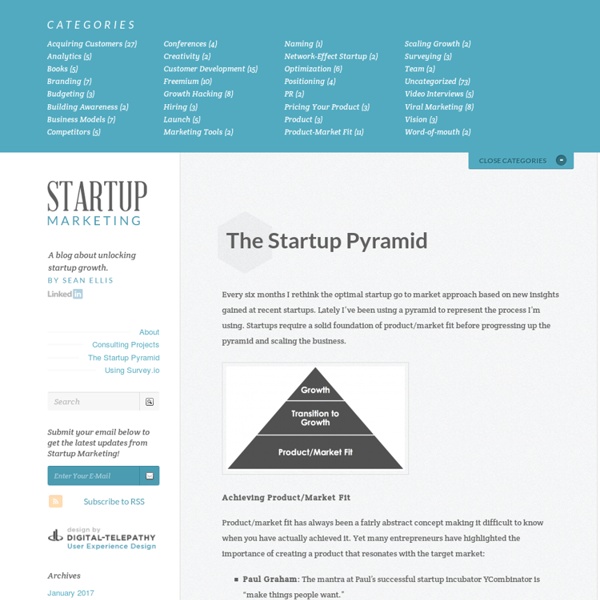 Every six months I rethink the optimal startup go to market approach based on new insights gained at recent startups. Lately I’ve been using a pyramid to represent the process I’m using. Startups require a solid foundation of product/market fit before progressing up the pyramid and scaling the business. Achieving Product/Market Fit Product/market fit has always been a fairly abstract concept making it difficult to know when you have actually achieved it. Paul Graham: The mantra at Paul’s successful startup incubator YCombinator is “make things people want.”Steve Blank: In Steve’s book Four Steps to the Epiphany he writes: “Customer Validation proves that you have found a set of customers and a market who react positively to the product: By relieving those customers of some of their money.”Marc Andreessen: A couple years ago Marc wrote the following on his blog: “…the life of any startup can be divided into two parts – before product/market fit and after product/market fit.”

How to bring a product to market / A very rare interview with Se Nivi · December 14th, 2009 Sean Ellis recently sat down with us and explained how to bring products to market. You should listen to this interview for ideas on how to get to product/market fit, how to measure fit, and how to survey your users so you can improve fit. If you don’t know Sean from his blog or tweets, he lead marketing from launch to IPO filing at LogMeIn and Uproar. This is the first time Sean has done an interview on the record. SlideShare: How to bring a product to market Audio: Interview with chapters (for iPod, iPhone, iTunes) Audio: Interview without chapters (MP3, works anywhere) Transcript with highlights: Below This inteview is free — thanks to KISSmetrics We’re bringing this interview to you free, thanks to the kind support of KISSmetrics. KISSmetrics built survey.io with Sean — now they’re collaborating on KISSMetrics, a new tool for funnel optimization. Prerequisites You’ll get more out of this interview if you also read: Outline Transcript Nivi: Right. Sean: Yeah.

Graphs cdixon.org – chris dixon's blog A graph consists of a set of nodes connected by edges. The original internet graph is the web itself, where webpages are nodes and links are edges. In social graphs, the nodes are people and the edges friendship. Edges are what mathematicians call relations. Two important properties that relations can either have or not have are symmetry (if A ~ B then B ~ A) and transitivity (if A ~ B and B ~ C then A ~ C). Facebook’s social graph is symmetric (if I am friends with you then you are friends with me) but not transitive (I can be friends with you without being friends with your friend). Twitter’s graph is probably best thought of as an interest graph. Graphs can be implicitly or explicitly created by users. Over the next few years we’ll see the rising importance of other types of graphs. Taste: At Hunch we’ve created what we call the taste graph.

Customer Service Matters for Mission Critical - Continuations Customer Service Matters for Mission Critical Saturday night I arrived late at our house having taken our older son to his first tennis “tournament.” Everyone else was already asleep and the house was dark. That’s where the fun really started. Never heard back from our regular electrician, who no longer is that (I left a follow up voice mail). This little episode really brought home (so to speak) how important responsive service is for anything that’s mission critical.

How New Ideas Almost Killed Our Startup Odysseus resisting the Sirens Vinicius Vacanti is co-founder and CEO of Yipit. Next posts on how to acquire users for free and how to raise a Series A. On my three year startup journey that lead to Yipit, I had over 30 other completely unrelated ideas. To be clear, the “ideas” I’m referring to are the ones that have nothing to do with your current startup. In our case, Yipit had always been about organizing local information and we had been working on it for a while. Social version of delicious (summer of 2007)Tool to recommend the best version of the online video you were currently watching (spring 2008)140it.com: Bookmarklett that smartly shortens your tweet to less than 140 characters. I now think of these new ideas as the Sirens of the startup journey. The Temptation To understand why these new ideas can be so tempting, I refer you to the incredibly insightful startup transition cycle. The gist is that when you have a new exciting idea, you are in a state of “uninformed optimism”.

Milestones to Startup Success Update added to end of post When your startup accepts outside money (such as venture capital), you are obligated to focus on maximizing long-term shareholder value. For most startups this is directly based on your ability to grow (customers, revenue and eventually profit). Most successful entrepreneurs have a good balance of execution intuition and luck. Several startups later I have a much better understanding of the key milestones needed for a startup to reach its full growth potential. Day 1: Validate Need for Minimum Viable Product (MVP) Before any coding begins it is important to validate that the problem/need you are trying to solve actually exists, is worth solving, and the proposed minimum feature set solves it. Eric Ries offers more details on the minimum viable product concept in this post/video. Where’s the Love? Vinod Khosla, one of the most successful Silicon Valley VCs in history, once suggested to me that startups should think of their early users as a flock of sheep.

Six strategies for overcoming “chicken and egg” problems cdixon. Products with so-called networks effects get more valuable when more people use them. Famous examples are telephones and social networks. “Complementary network effects” refer to situations where a product gets more valuable as more people use the product’s complement(s). Network effects can be your friend or your enemy depending on whether your product has reached critical mass. Here is a high level summary of the 6 strategies we describe with a few updated examples. 1. 2. Virtual machines and Bootcamp gave Apple’s hardware some sideways compatibility with Windows. 3. 4. On the other hand, when Sony and Philips launched the CD, they succeeded because they did a significantly better job influencing complement producers. 5. Providing a stand-alone use is the strategy that VCR producers used to achieve a successful launch and avoid fighting the difficult chicken and egg startup problem. 6. Vertical integration is risky – as witnessed by the Apple computer in the late 80s and early 90s.

Add Another Zero Talking about scale and growth is hard. Many people talk in percentages in pre-determined time periods (e.g. let’s grow revenue 100% next year). I find this to be relatively useless. Instead, I like to challenge people to think on a bigger scale over a variable time period. I used to call this “increase X by an order of magnitude” until I realized that lots of business people don’t actually know that an increase in an order of magnitude is equal to multiplying by 10. For example, I’m an investor in a company that is growing its user base as they had planned. In another case, I’m an investor in a company that had a great year on all accounts. This question can apply to any metric. While there are natural limits to this when you approach it top down, it becomes very powerful when you approach it bottom up. The variable time period is a key aspect of this. So – as you go into your annual planning cycle for 2010, try the “add another zero” approach on some of your numbers.

Key Elements of a Massively Scalable Startup VC backed startups generally aspire to valuations in the hundreds of millions or even billions of dollars, but very few really consider all of the elements they’ll need to make it happen. After analyzing several startups I’ve worked with that have reached or are approaching these valuations I’ve boiled it down to four interdependent commonalities that always seem to exist. While they are easy to describe, they are of course very difficult to achieve. Still your best chance of achieving them is to know what they are. Element 1: Gratification engine Your gratification engine is the repeatable process of turning cold prospects into highly gratified customers. Element 2: Economic engine Once you have figured out how to gratify prospects, your next challenge is creating a viable economic engine. Element 3: Growth engine Your growth engine is very dependent on your economic engine. Element 4: Huge addressable market The best opportunities generally have the hardest markets to accurately size.

3 Sales Tips for Startups – Creating a Burning Platform 3 Sales Tips for Startups — Creating a Burning Platform This is part of my ongoing series Startup Advice. Many entrepreneurs who start technology companies are product people, technologists or savvy business people who worked previously for a larger company. 1. Even businesses that attempt to sign up customers directly on a website need to answer this question for people albeit programmatically and through good website copy. 2. Many entrepreneurs think naively that it’s not good to have competitors. I’ll cover “Why Buy Mine” in a later post, but my quick answer is that referenceability is the most critical tool to solving this problem. 3. Great sales leaders know that you can only sell effectively when your sales cycle matches the customers buying cycle. When you qualify a customer, if the customer has shown interest in your product but isn’t ready to buy then they get sent over to marketing. Initially the leads need to be qualified. So is there nothing you can do to accelerate sales?

Steve Jobs single-handedly restructured the mobile industry cdix With the introduction of the iPhone, Steve Jobs achieved something that might be unique in the history of business: he single-handedly upended the power structure of a major industry. In the US, before the iPhone, the carriers (Verizon, AT&T, Sprint, T-Mobile) had an ironclad grip on the rest of the value chain – particularly, handset makers and app makers. Ask anyone who ran or invested in a mobile app startup pre-iPhone (I invested in one myself). The carriers had so much power because consumers made their purchasing decisions by choosing a carrier first and a handset second. I’ve talked to a number of mobile app startups lately who say their former contacts at the carriers are shell shocked: no one is knocking on their doors anymore. Yes, Apple has rejected some apps for seemingly arbtrary or selfish reasons and imposed aggressive controls on developers.