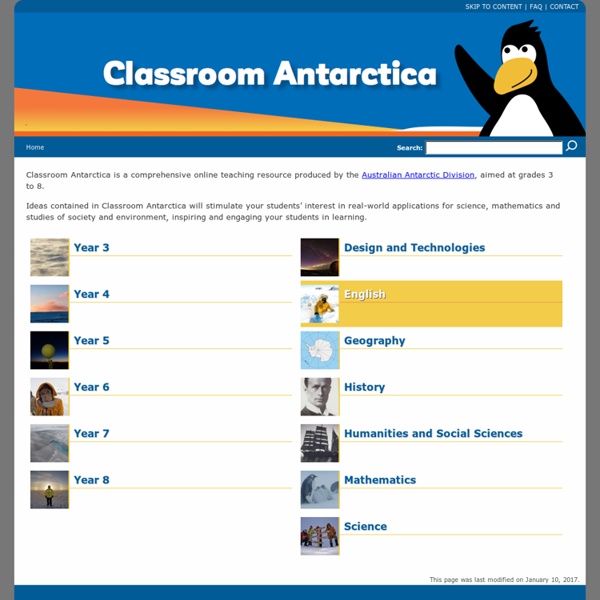 Antarctica Facts, index Quick Antarctic Statistics Area 13,829,430 km2 5,339,543 miles2 IfItWereMyHome.com Canada A land of vast distances and rich natural resources, Canada became a self-governing dominion in 1867 while retaining ties to the British crown. Economically and technologically the nation has developed in parallel with the US, its neighbor to the south across an unfortified border. Canada faces the political challenges of meeting public demands for quality improvements in health care and education services, as well as responding to the particular concerns of predominantly francophone Quebec. Canada also aims to develop its diverse energy resources while maintaining its commitment to the environment. The land now occupied by Canada was first inhabited approximately 16,000 years ago by aboriginal peoples.

FREE - Federal Registry for Educational Excellence Browse By Subject Browse By Standard What is FREE? 6 Sites To Get Kids Excited About Google Maps I can remember three distinct occasions in my life where I have been blown away by technology. I will save the first two for another day, but I will say that the amazing experience of walking the streets of New York, from my computer on the other side of the world in Australia is definitely one of them. That feeling of disbelief where you wonder if it is another April 1st prank… What, they actually drove a little car all around the city taking photos??? But they did… And they continue to do so. Google Maps started as a downloadable C++ program designed by two Danish brothers Lars and Jens Rasmussen. Since being acquired by Google in 2004, the program turned web app, has seen massive innovation and is now a tool used in nearly ever industry imaginable.

Understanding penguin response to climate and ecosystem change Welcome to the Penguin Science Education Page! Here you will find fun and educational activities to help students learn about Adelie Penguin life, history and their relationship to climate change. Students can send questions to the researchers who study penguins, check the nests of penguins as they raise the chicks, and (from Oct-Jan) even receive a postcard from Antarctica! Adelie Penguin's existence in the far southern region of our planet. The average day in the life of a penguin is filled with adventure and drama, as they struggle to live and thrive in a challenging environment and changing climate of Antarctica. Antarctic Summer Glacial dreaming The Mertz Glacier, named for Swiss explorer Xavier Mertz who died during an Australian expedition with Douglas Mawson in 1913 and whose body most likely remains in the glacier today, is an inhospitable, remote part of Antarctica between Cape de la Motte and Cape Hurley. The glacier was renowned for an exposed ice tongue poking 40 kilometres out from the Antarctic continent but in early 2010 a 97-kilometre long iceberg smashed into Mertz, resulting in the calving of a massive chunk of the ice tongue. In January 2011, a team of nearly 40 Australian and international scientists braved the Southern Ocean to deploy underwater cameras, moorings and sensors to study the glacier and its surrounding waters, with the mission of uncovering new information about the Earth's changing climate. Related links Interactive: Super icebreaker

Bible Maps, Timelines, Charts, Lineages The Lost Tribes of Israel Locations where Israel taken captive View Migration after captivity View Israel's first settlement in Europe View The Antarctic The Antarctic is probably the most desolate continent on the planet. It is a continually changing area, especially now with global warning. Australia has had a long connection with it, not only through exploration but also through scientific research. Australia has laid claim to the largest part of the continent, though other countries also have claims to significant areas.

Personal Finance Free Course Materials Looking for some resources to teach your teens about personal finance? Check out these sites that provide complete courses and lesson plans. They're all free. Building Your Future Here you can download, in PDF format, a financial literacy curriculum that includes three teacher guides and three accompanying student books covering banking, financing and investing. Personal Finance Resource Book Developed by a business education and math teacher, these lessons are provided through Curriki, an open education resource site.

10 Fun Facts About Antarctica 1. The first confirmed sighting of the continent was in 1820. 2. Chronologies & Timelines of Antarctic Exploration This chronology was prepared by Robert K. Headland, Archivist and Curator, Scott Polar Research Institute. It appears here courtesy of Mr Headland and SPRI. Note: Only the Antarctic portion is included here. The following Antarctic and Arctic lists give explorations, in chronological order, towards the South Pole and North Pole, their attainment (air and surface, and by sea in the Arctic), and the first crossings of the regions. SS 1Geography and History Classwork-Homework Earth from Space Terms to Learn Landforms: mountains, hills, plateaus, and plains Elevation: height above or below sea level Mantle: surrounds the core mostly hot, solid rock Crust: a thin layer of rock, sand, and soil that floats on the melted outer part of the mantle Tectonic Plates: separate sections of the crust Continental Drift: movement of plates Volcanoes: cone shaped mountains created by lava Earthquakes: sudden shifts in the Earth's crust The Layers of the Earth 5:59 The Earth's Layers Scan Section 2 Land, Water, and Climate pages 9-18

Calendar Resources 12-month Seasonal Calendar TemplateMake your own Seasonal CalendarFood chain cut out pageFood chainsWhat is an ecosystemAdaptations and climate For teachers A seasonal calendar is a method for passing on information that is important to a particular group of people. Indigenous Australians pass on knowledge and information through storytelling and artwork, and people learn by observing and imitating family and friends. Student’s understanding of these learning styles will give them the freedom to explore the seasonal calendar and complete these classroom activities.

Research voyage to Antarctica From February until mid-March 2008, New Zealand scientists embarked on an 8-week voyage to the Ross Sea to survey the marine environment and explore the variety of life forms (biodiversity) in the region. They sailed on board New Zealand’s research vessel Tangaroa and collected samples of marine life that included viruses, bacteria, plankton, benthic fauna, cephalopods, fish and the prey of top predators such as seabirds and whales. With a biodiversity focus, the intention was to collect samples of living organisms from the sea floor to the sea surface, from microscopic to mega-size, across a wide range of environmental and geographic gradients. This included capturing images of the sea floor down to depths of 4,000 metres, in areas not explored before. To understand how the ecosystem functions, studies of feeding patterns were carried out across as many biological groups as possible, to improve understanding about the ecosystem of the Ross Sea region.