Introduction to the Electromagnetic Spectrum - Mission:Science 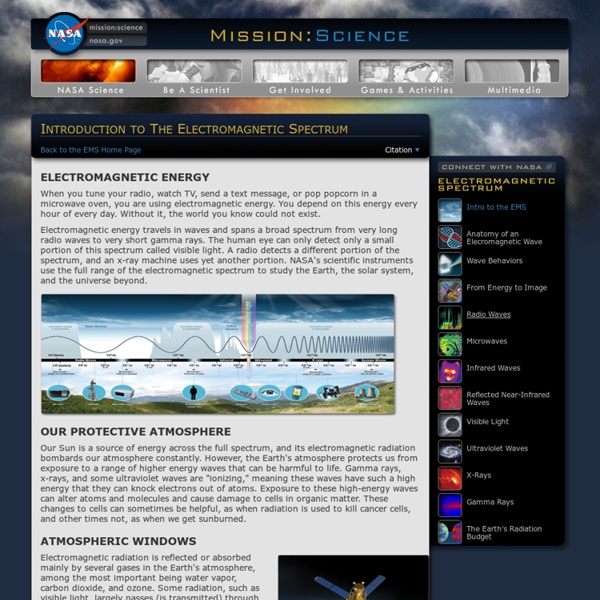 When you tune your radio, watch TV, send a text message, or pop popcorn in a microwave oven, you are using electromagnetic energy. You depend on this energy every hour of every day. Without it, the world you know could not exist. Electromagnetic energy travels in waves and spans a broad spectrum from very long radio waves to very short gamma rays. The human eye can only detect only a small portion of this spectrum called visible light. A radio detects a different portion of the spectrum, and an x-ray machine uses yet another portion. Our Sun is a source of energy across the full spectrum, and its electromagnetic radiation bombards our atmosphere constantly. Seeing Beyond our Atmosphere NASA spacecraft, such as RHESSI, provide scientists with a unique vantage point, helping them "see" at higher-energy wavelengths that are blocked by the Earth's protective atmosphere. Next: Anatomy of an Electromagnetic Wave Back to Top

How does Earth Observation work? How does Earth Observation work? Meteosat 1: the first image The single location where we can learn the most about our planet is found nowhere on Earth but high up above it. The ability to fly satellites into space has changed all our lives in many ways, but the single greatest innovation has been the availability of new ways of seeing the world that satellites leave behind. Early pictures of the Earth seen from space became icons of the Space Age, and encouraged an increased awareness of the precious nature of our common home. Today, images of our planet from orbit are acquired continuously; they have become powerful scientific tools to enable better understanding and improved management of the Earth and its environment.

Balancing the sea-level budget / Space for our climate Ice sheet contribution to sea-level rise Balancing the sea-level budget 26 March 2014 Glossary The air surrounding the Earth, described as a series of shells or layers of different characteristics. The atmosphere, composed mainly of nitrogen and oxygen with traces of carbon dioxide, water vapor, and other gases, acts as a buffer between Earth and the sun. The layers, troposphere, stratosphere, mesosphere, thermosphere, and the exosphere, vary around the globe and in response to seasonal changes. Troposphere stems from the Greek word tropos, which means turning or mixing. The troposphere is the lowest layer of the Earth's atmosphere, extending to a height of 8-15 km, depending on latitude. This region, constantly in motion, is the most dense layer of the atmosphere and the region that essentially contains all of Earth's weather.

Assessment of global megatrends — an update Table of contents Most of these interactions are intimately linked and set to unfold over decades. All are likely to have important implications for living standards and well-being. The European environment's status, trends and prospects have always depended in part on events outside its borders.

The film "The Day After Tomorrow" - comments by climatologist Stefan Rahmstorf The film shows a disastrous and abrupt climate change. Due to man-made global warming, first the Larsen B ice shelf breaks up (this did happen in the real world, see animation of satellite images - allegedly only after the authors had written it into the film). This event is used to introduce the main paleo-climatologist character, Jack Hall, who is drilling out there and narrowly escapes.

Latest EU Sentinel satellite to track global food crops - BBC News The lead spacecraft in Europe's new multi-billion-euro Earth observation programme has gone into orbit. Known as Sentinel-2a, the satellite was sent up on a Vega rocket from Kourou in French Guiana. The mission will return pictures of the planet's surface in visible and infrared light.

19 Great Tools to Create Educational Infographics ~ Teachers Tech Workshop Because human beings are visual creatures,communicating visually proves to be the most effective strategy to get your message clearly conveyed.One way to achieve this is to use infographics especially in this digitally oriented world wherein people are fed up with reading too much information overload.If you allow a reader to choose between a long article containing more than 1000 words and an inforgrafic that needs just some scrolls up and down,they will undoubtedly prefer the second option, infographic. Infographics have been utilized in all sectors of our life, education is no exception.Nowadays, teachers and educators endeavor to look for great educational infographics to use with their students in the class.to help them in their task,I've compiled a list of tools to create your own infographics 1.Icharts

Mission overview / Envisat Mission overview Envisat soars into orbit Launched on 1 March 2002 on an Ariane-5 rocket from Europe’s spaceport in French Guyana, Envisat was the largest Earth observation spacecraft ever built. The eight-tonne satellite orbited Earth more than 50 000 times over 10 years – twice its planned lifetime. The mission delivered thousands of images and a wealth of data used to study the workings of the Earth system, including insights into factors contributing to climate change.