21st century Gypsies: New Age Travellers adopt horse drawn-caravans and a love of Facebook (as long as it's solar powered) 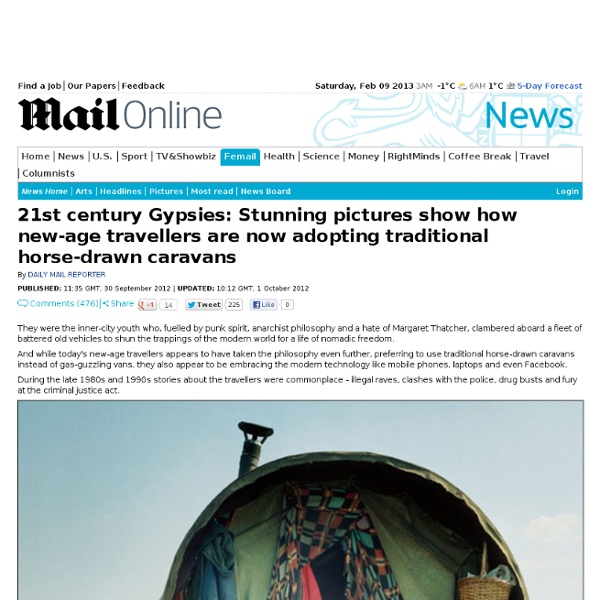 By Daily Mail Reporter Published: 11:35 GMT, 30 September 2012 | Updated: 10:12 GMT, 1 October 2012 They were the inner-city youth who, fuelled by punk spirit, anarchist philosophy and a hate of Margaret Thatcher, clambered aboard a fleet of battered old vehicles to shun the trappings of the modern world for a life of nomadic freedom. And while today's new-age travellers appears to have taken the philosophy even further, preferring to use traditional horse-drawn caravans instead of gas-guzzling vans, they also appear to be embracing the modern technology like mobile phones, laptops and even Facebook. During the late 1980s and 1990s stories about the travellers were commonplace - illegal raves, clashes with the police, drug busts and fury at the criminal justice act. Photographer Iain McKell took his first pictures of new-age travellers 25 years ago. And while little has been written about the New Age travellers in the past decade, the movement has far from fizzled out.

EUROPE — Prague Website Medieval architecture, communist history, beer. Yes, yes and yes! Prague still has got it all. Obligatory monuments won’t move any time soon and neither will the city centre’s tourist traps. To skip them means to win enough time to discover better things. Why Americans Are So Polarized: Education and Evolution - Avi Tuschman Improvements in learning—which correlates with stronger partisanship—and the tendency to choose likeminded mates may be helping to create divided politics. Brian Snyder/Reuters In his State of the Union address, President Obama lamented how Washington “has been consumed by ... rancorous argument,” which over the past year has prevented us “from carrying out even the most basic functions of our democracy.” The vast ideological chasm that separates politicians on the left from those on the right shows little sign of narrowing, and the midterm elections this fall promise to be extremely contentious.

20 Spectacular Abandoned Mansions of the World All over the world, grand mansions, stately homes and other opulent residences that have fallen into ruin are reminders of an elegant past and the changing nature of the times. Underscoring both a rich history and the transience of existence, the reasons behind their abandonment may range from lost fortunes and changing fashions to war, violence and myriad other factors. Today, the crumbling remnants of these great houses serve as a window in time and offer urban explorers the opportunity to capture the ruins in all their glory. In this article, we’ll travel to 20 of the most impressive abandoned mansions across the world. (Image: Bousure, cc-nc-nd-3.0)

Sarah Jessica Parker Home - West Village Brownstone If you've ever imagined the inside of Sarah Jessica Parker's home, you might have pictured a wall of UGG boots and Manolos, another consisting solely of tutus, and one with a whiteboard outlining her plans to take over Vogue. In actuality, her home looks as cozy and lived-in as yours or mine — except a whole lot better, of course. During a quickie tour of her New York City brownstone for Vogue.com, Sarah Jessica Parker whipped her way through 73 questions that range from informative (her favorite food: Barbuto's roast chicken) to poetic — she describes NYC as "symphonic," "tiny," and "real" — to bizarre. (We'd love to know what psychologists make of her "hand-dipped" Rorschach reading.) But, while the interview is fascinating, we can't get enough of the tour that lets us see all of her stuff. A Ping-Pong table in the middle of a dining room?

NANCY ♡ GIRL: SATURDAY SHOW ♥ VIVIENNE WESTWOOD'S BUFFALO GALS ♥ BUFFALO GAL (GIRL) STYLE PART 3 (read part 1 and part 2) So here is where it all began...with one of the very early collections from Vivienne Westwood (in collaboration with her beau Malcolm McLaren) back in Paris in 1982-ish (might have shown in 1981 actually)...if you really look at it, including the makeup and androgyny, it looks very pre-pre-grunge... “In March 1982, McLaren and Westwood opened a second shop. It was called 'Nostalgia of Mud' and the fascia was covered by a world map. The interior was styled like an archaeological dig. Visitors descended on recycled scaffolding to an earth floor and a heaving ‘mud’ pond surrounded by voodoo-like artifacts.”

Statement Hats Big hats have a personality all their own. Sometimes it takes a big personality to pull a hat from runway to the street. Pharrell Williams was a cause celebre when he wore a Vivian Westwood felt hat to the Grammys and Oscars. Ask the GIF Guru: How to Recover from an Accidental Text Few moments in life are more horrifying than the hour-long second it takes to realize that you sent a text to the wrong person. The first time it happened to me, I had been firing off a whole lot of fury to my then-boyfriend about my close friend Alex. Now, to my own credit, Alex was being really annoying and mean and acting like the Bart Simpson-y brother I never wanted, but I managed to exaggerate and hyperbolize my momentary hatred for him to such an extent that even my own boyfriend would have been like, “Dude, chill.” I say “would have been” because my boyfriend never got the text; Alex did. Alex, who was sitting across from me during lunch, eating his burger while I had been hunched over in novel-length texting mode. The very same Alex whose phone dinged the moment I hit send, who put down his burger to pick up his cell, and then slid his mobile bearer of bad news across the table to me where I — still oblivious — picked it up to read my own awful rant.

Study: Overachieving Isn't Worth It The real world doesn’t offer extra credit. No one cares if you over-deliver on your promises — but you still lose points if you under-deliver, according to a new study led by behavioral scientist Ayelet Gneezy of the University of California, San Diego. Here’s a breakdown of the research, published recently in the journal Social Psychology and Personality Science: (Researchers) asked college students to imagine using an online company to buy concert tickets for Row 10. Three in a Crowd What Courtney Wore… This is really funny: Courtney Love has participated with some friends to create a website showing all the outfits she wears. She’s not the author of www. whatcourtneyworetoday.com, but she sends her outfits by mail or phone on a daily (or so) basis to them, and they post it for her. The clothes are mostly big designer names, but I know she has a big vintage collection so I’m hoping we get a peek at that (please!). Valentino dress.