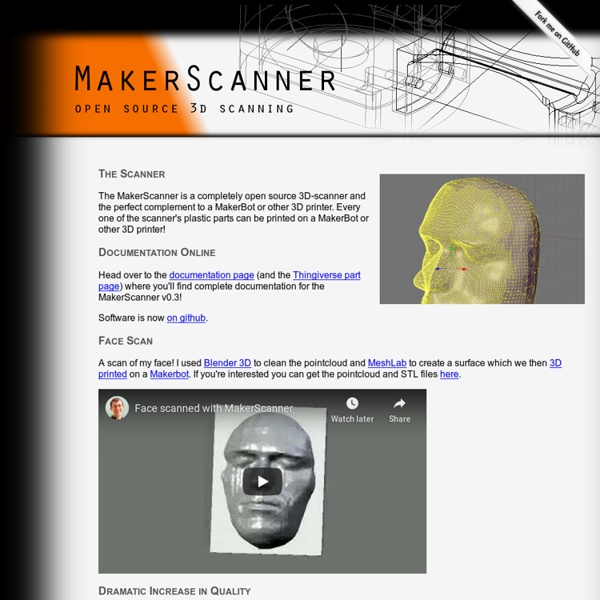 Scientists develop new app to turn mobile phones into 3D scanners Dec.5, 2013 3D scanning aims to capture the geometry of the 3D world, however most existing solutions require a complicated setup. But here is an amazing stuff: The Computer vision and geometry Lab of the Swiss Federal Institute of Technology in Zurich (ETHZ) developed an app that turns your normal smartphone into a mobile 3D scanner. Instead of taking a normal photograph, a user simply moves the phone around the object of interest and after a few motions, a 3D model appears on the screen. Bukobot 3D Printer - Affordable 3D with No Compromises! by Diego Porqueras Affordable Desktop 3D Object Printing for EveryoneGreat First Printer..or Second..or Third! Easy to BuildEasy to Expand or UpgradeHigh Quality ComponentsFaster than most printersDual Extruder OptionGreat DocumentationOpen Source Environmentally Friendly Options You can create almost anything you can dream up with a Bukobot 3D printer, right on your desk! The Buko framework is the next generation of Open Source 3D Printers. 3D printers using this new framework are called Bukobots. With many months in development, I have combined the best ideas from the open source community and some new ideas of my own into an extremely flexible open source 3D printer design. Following the traditions of “Reprap” 3D printers, the new Buko framework design is self-replicating and does not require any special machining for it’s major parts.

IBM invents ’3D nanoprinter’ for microscopic objects Illustration: a hot tip triggers local decomposition and evaporation of chip substrate material to etch patterns (credit: Advanced Materials) IBM scientists have invented a tiny “chisel” with a nano-sized heatable silicon tip that creates patterns and structures on a microscopic scale. The tip, similar to the kind used in atomic force microscopes, is attached to a bendable cantilever that scans the surface of the substrate material with the accuracy of one nanometer. Unlike conventional 3D printers, by applying heat and force, the nanosized tip can remove (rather than add) material based on predefined patterns, thus operating like a “nanomilling” machine with ultra-high precision.

Pi 3D scanner: a DIY body scanner The blog’s rather late today but definitely worth the wait we think. It’s an jaw-droppingly brilliant Raspberry Pi-driven 3D scanner by Richard Garsthagen . He used it recently to scan over 200 people at the Groningen Makerfaire with spectacular results: Marcus Thymark's Open-Source FilaMaker Shreds and Recycles Plastic for 3D Printing German engineer and inventor Marcus Thymark is developing a filament-producing machine that allows 3D printing enthusiasts to grind up and reprocess discarded printed objects and other scrap plastic for re-use. Called the FilaMaker, Thymark’s machine is based on a powerful hand-cranked shredder that can be made from steel or stainless steel. He is working on integrating the shredder with a melter and extruder, which will allow the user to recycle scrap plastic into new filament. Thymark says the FilaMaker can handle different kinds of plastic, such as acrylonitrile butadiene styrene (ABS), polyethylene (PE), and polypropylene (PP).

83-Year-Old Inventor Designs Inexpensive Open-Source Filament Extruder to Cut the Cost of 3D Printing Hugh Lyman, an 83-year-old retiree from Enumclaw, Washington, won The Desktop Factory Competition with his design for a low-cost, open-source machine capable of turning resin pellets into inexpensive filament for 3D printing. The competition, sponsored by Inventables, Kauffman, and the Maker Education Initiative, required that the parts used to make the machine could cost no more than $250. Lyman first entered his proposal in August 2012, but was disqualified because the machine exceeded the budget of $250. After modifying the project, he resubmitted it under the name “The Lyman Filament Extruder II”. This time the machine’s design met the budget restriction and was able to extrude different filament diameters, saving up to 80 percent on material costs.

Explainer: What Is 4D Printing? Additive manufacturing – or 3D printing – is 30 years old this year. Today, it’s found not just in industry but in households, as the price of 3D printers has fallen below US$1,000. Knowing you can print almost anything, not just marks on paper, opens up unlimited opportunities for us to manufacture toys, household appliances and tools in our living rooms. But there’s more that can be done with 3D printed materials to make them more flexible and more useful: structures that can transform in a pre-programmed way in response to a stimulus. Recently given the popular science name of “4D printing”, perhaps a better way to think about it is that the object transforms over time. These sorts of structural deformations are not new – researchers have already demonstrated “memory” and “smart material” properties.

MakerBot announces new Replicator dual extrusion 3D printer for pre-order with bread-loaf size build area! MakerBot has announced the latest model to their line of personal 3D printers, and this one’s not a kit. The new MakerBot Replicator™ is a fully assembled desktop 3D printer that lets you print 2 different materials or colors in a single design. It features a wider shape and a larger print area.