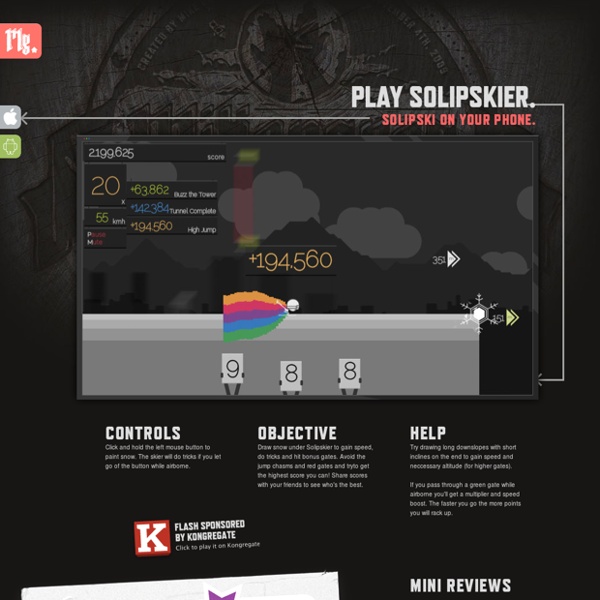 Pacxon - Online Game Additional Information: Use Pacman to capture sections of the board in Pacxon. Clear 80% to progress to the next level. Pacxon is the most popular game on the whole site! 2012 March 12 - The Scale of the Universe Interactive Discover the cosmos! Each day a different image or photograph of our fascinating universe is featured, along with a brief explanation written by a professional astronomer. 2012 March 12

Curvy in HTML5 Curvy is a HTML5 puzzle game using the canvas element. Just rotate the tiles so that like colors connect. Modernizr tells me you don't have canvas support in your browser. Sadly, this game uses technology that's only in browsers with HTML5 support. A to K - 2048 clone by Creative Spark Studios How to play: Use your arrow keys to move the tiles. When two tiles with the same letter touch, they merge into the next letter in the alphabet! The goal is to create the letter K.

Glaucus atlanticus These sea slugs feed on other pelagic creatures including the venomous cnidarian, the Portuguese Man o' War. Because the sea slug stores stinging nematocysts from the cnidarian within its own tissues, a human picking up the sea slug may receive a very painful sting. For more information on the effects of the nematocysts, see Portuguese man o' war.

Ultimate Tic-Tac-Toe Updated 7/16/2013 – See Original Here Once at a picnic, I saw mathematicians crowding around the last game I would have expected: Tic-tac-toe. As you may have discovered yourself, tic-tac-toe is terminally dull. There’s no room for creativity or insight. Good players always tie. Games inevitably go something like this: Artistic Photo Editing of Everyday Built Environments Erik Johansson takes photo editing and manipulation to new levels with his ever-growing collection of creative, innovative and amazing scenes of altered architecture and unbelivable built environments, distorted objects and twisted imagery – all while preserving an eerie photo-realism from the original photographic subject. Given his emphasis on constructed objects, the care with which he crafts every detail of each image and controls the overall composition, it is perhaps no surprise that this photographer’s background is not in the arts but in computer engineering and interactive design. The rich three-dimensional complexity of each edited photograph is accomplished using exclusively two-dimensional computer editing tools and each work is based on a real photograph, manipulated, altered and added to in a layered and sequential process.

Play BREAKTHROUGH, a free online game on Kongregate Check your security settings Connection issues are typically caused by security settings on your network or computer. Check that your firewall or router has port 5222 open and allowing traffic. If you are on a school or office network, you may need to contact your network administrator to make the necessary changes. 19 Amazing Video Game Cakes Serious gamers know just how time-consuming gaming is, often making it difficult to do anything besides working (only to buy more games) and playing the games themselves. Even so, gamers usually do still manage to have lives outside of the console; these cakes are some of the amazing creations born as a result. Consoles While most people dedicate their gaming obsessions to the specific games they play, others adore entire consoles. For those who worship at the altar of the original NES, Debbie Does Cakes has made a simply amazing cake complete with some of the system’s most classic characters.

2048 Join the numbers and get to the 2048 tile! New Game How to play: Use your arrow keys to move the tiles. When two tiles with the same number touch, they merge into one! Note: The game on this site is the original version of 2048. Apps for iOS and Android are also available. World's Tiniest Chameleons Found in Madagascar Researchers have recently discovered four new chameleon species, which rank among the world’s tiniest reptiles. Adults of the smallest species are just over an inch from snout to tail. The four new species belong to the genus Brookesia, also known as the leaf chameleons, which live in remote rainforests in northern Madagascar. The genus is already known to contain some very small species, with members typically resembling juvenile versions of larger species. As small as these guys are, a super-tiny dwarf gecko found in the British Virgin Islands might be just a tad more wee.

Fundamentals - Fallout 3 Wiki Guide - IGN Last Edited: September 9, 2013 at 10:13 PM Overview[edit] Fallout 3 is a post-apocalyptic western RPG with enough shooting mechanics that it is, indeed, a full-fledged hybrid title. You're given control of a male or female (depending on who you choose) who lives in a heavily-guarded nuclear fallout shelter. There's a big, bad post-nuclear world outside of the safety of Vault 101 -- your home -- but it won't be until you are 19 years that you finally get out into the world to see for yourself the devastation of nuclear warfare. OpenCola (drink) OpenCola is a brand of open-source cola, where the instructions for making it are freely available and modifiable. Anybody can make the drink, and anyone can modify and improve on the recipe as long as they, too, license their recipe under the GNU General Public License. Since recipes are, by themselves, not copyrightable, the legal basis for this is untested.[1] The flavouring formula for OpenCola is:[2][3] Ingredients of OpenCola

OBJECTIVE Draw snow under Solipskier to gain speed, do tricks and hit bonus gates. Avoid the jump chasms and red gates and tryto get the highest score you can! Share scores with your friends to see who's the best by 4329578 Dec 11

This is a really really fun game. by weyboom Apr 1