7 TED Talks on the wonder of 3D printing 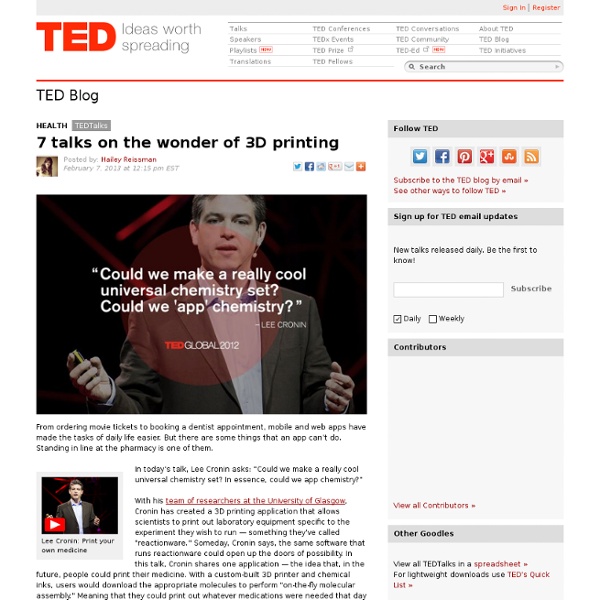 From ordering movie tickets to booking a dentist appointment, mobile and web apps have made the tasks of daily life easier. But there are some things that an app can’t do. Standing in line at the pharmacy is one of them. Lee Cronin: Print your own medicineIn today’s talk, Lee Cronin asks: “Could we make a really cool universal chemistry set? In essence, could we app chemistry?” With his team of researchers at the University of Glasgow, Cronin has created a 3D printing application that allows scientists to print out laboratory equipment specific to the experiment they wish to run — something they’ve called “reactionware.” At TED, we love sharing stories of 3D printing and its rapidly developing power to make new things possible. Lisa Harouni: A primer on 3D printing So what exactly is 3D printing? Klaus Stadlmann: The world’s smallest 3D printer Klaus Stadlmann built the microprinter, the smallest 3D printer in the world. David F.

3D printing may put global supply chains out of business: report Will 3D printing make global supply chains unnecessary? That's a real possibility, states a recent report from Transport Intelligence. 3D printing (or "additive manufacturing," as it's called in industrial circles) takes offshore manufacturing and brings it back close to the consumer. It has enormous potential to shift the trade balance. 3D Printed Wireless Tank In this Instructable I will show you how to make a wireless tank that you will be able to play with someone else or just use it a base to create bigger and better tank. This tank uses Bluetooth modules connected to Tera Term to send commands to the Arduino. I used IR Leds that are used in Lazer tag guns (links in the next step) so you can battle with your friends or just use it to explore the world a couple inches off the ground from your computer.

Lab-grown functioning kidney successfully transplanted in rats An engineered kidney transplanted into a living rat has been shown to successfully filter blood and urine -- though at a fraction of a normal kidney's functionality. The groundbreaking study, published in the journal Nature Medicine, provides some distant hope for the 51,000 people in the UK in need of dialysis or an organ transplant. Receiving an organ from a living donor, often a relative, gives patients the greatest chance of success with survival rates about ten percent better on average. However, according to NHS statistics just 1,009 living donor kidney transplants took place in the year preceding March 2012, with under 3,000 transplants taking place in total. As donor shortages persist and those in need of dialysis or transplant increase (up 20 percent since 2006) Kidney Research UK made the announcement this year that kidney disease threatens to become a public health crisis in the near future. Nevertheless the technology will be a game changer.

The dark side of 3D printing: 10 things to watch The 3D printer is a double-edged sword. It stands to transform technology and society for the better, but we also can't ignore the potential negative consequences. As with any new technology, it's easy to get swept up in the benefits of 3D printing. Doctors want to put 3D printers on the surgeon's table Scientists at Cornell University, led by Dr. Lawrence J. Bonasser, are pioneering a spinal surgery that sounds like something straight out of science fiction. Utilizing 3D printing techniques loaded with stem cell-infused bio-ink, they aim to repair the degenerative spinal discs of 30 million ailing Americans. Dr.

3D printing of liquid metals at room temperature Jul.9, 2013 Researchers from North Carolina State University have developed 3D printing technology and techniques to create free-standing structures made of liquid metal at room temperature. 3D Printers can use a wide range of materials, including plastics, resins, metals, ceramics and more. However the most dramatic and challenging has been printing with metal. You, Too, Can 3D Print Your Own Robot Robots are part of our everyday lives, but they're boring — relegated to menial jobs like scrubbing your floor, vacuuming it or just zig-zagging all over it. Sure, droid-like mechanical humans like the Asimo pop up now and then, but they're big, expensive corporate toys, not something everyone can buy. Where are our household robots? The 21st Century Robot project aims to finally make the robot companion a reality. Led by Intel futurist Brian David Johnson, the project aims to put robot-building tools into the hands of everyone, and Johnson has found the key tool to help him to do that: 3D printing.

Introduction to 3D Printing While all 3D printers create objects using additive methods (the opposite of a CNC machine), different approaches exist to actually physically depositing the material. The most common methods are: -Fused Deposition Modeling- A very common method in which the part is printed by extruding molten stings of material that melt together to create the part. Blog: The third industrial revolution The third industrial revolution is in full swing. At Inventables it is our mission to simplify the process of going from idea to finished product. We believe this will further ignite this revolution. We believe this movement will be the primary driver of growth in our economy in the next decade.