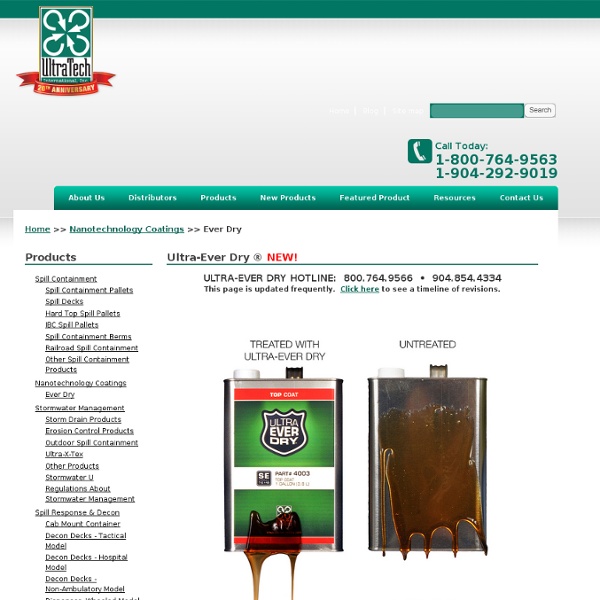 Ultra-Ever Dry does NOT dry clear! It cannot be used on automobile windshields and obscures visibility through glass. Ultra-Ever Dry is a superhydrophobic (water) and oleophobic (hydrocarbons) coating that will repel most water-based and some oil-based liquids. Ultra-Ever Dry has vastly improved adhesion and abrasion resistance, compared to previous superhydrophobic technologies, allowing it to be used in applications where greater durability is required. Anti-Wetting- The superhydrophobic coating keeps objects dry. Related:  Mix

Non-Inverting Amplifier The amplifier is the first step in the circuit, it increases the amplitude of the signal from around + or - 200mV to + or - 2.5V (ideally). The other function of the amplifier is to protect the audio source (the thing generating the audio signal in the first place) from the rest of the circuit. The outgoing amplified signal will source all its current from the amplifier, so any load put on it later in the circuit will not be "felt" by the audio source (the microphone element in my case). Do this by setting up one of the op amps in the TL072 or TL082 package in a non-inverting amplifier configuration. The datasheet of the TL072 or TL082 says that it should be powered with +15 and -15V, but since the signal will never be amplified above + or - 2.5V it's fine to run the op amp with something lower. Wire up your +V(pin 8) and -V(pin 4) to the op amp. The following equation describes the relative amplitudes of the signal before and after the non-inverting amplifier:

WABA Fun | Kinetic Sand - 1KG Kinetic Sand is WABA Fun’s first product that breathes motion. Easy-to-shape sand that molds into simple desktop designs. Playing with Kinetic Sand is a magical and mesmerizing experience, giving a moment of relaxation for both young and old. Note: Kinetic 2.5KG ships in a labeled polybag, not in the box pictured. To our INTERNATIONAL customers, this site ships from the US only! Information for Parents and Teachers Sand play stimulates and develops children's fine motor and creative playing skills. Need Support for Kinetic Sand - 2.5KG BULK?

Fine Art & Design Consulting, Maricela Sanchez Art, Bespoke CratesMaricela Sanchez Fine Art 7022 DIY 10W 1050lm 6000K COB LED White Light Rectangle Strip - Yellow (DC 12~14V Para permitir descontos por volume neste site, use o código do cupom: BULKRATE durante o checkout. Você vai ver um desconto aplicado na parte inferior do carrinho de compras. Preços competitivos estão disponíveis. Contacte-nos para mais detalhes. What is Bulk Rate? BulkRate is a semi-wholesale system with items priced separately from retail. Looking to get even more? Or Contact Us Directly Kinobi Will Use Kinect To Teach You Yoga, Dancing Or Maybe Even Surgery YouTube makes it easy to find instructional videos on practically any topic. There are 18,600,000 search results for “how to” on the site at the moment. Obviously not all of them are relevant, but that’s a staggering number. But if you’re trying to learn a physical skill — like dancing, yoga or martial arts — how can you tell if you’re doing the moves correctly? Kinobi wants to solve this problem by using the Microsoft Kinect device to monitor your activity and give you real-time feedback. Kinobi will sell a selection of instructional videos, filmed in 3D, delivered through a web application. The company was founded by Chapman Snowdan, who started the project while he was a fellow at 4.0 Schools. “When I was a kid, I tried everything,” Chapman says. After the 4.0 Schools fellowship Kinobi joined the Launch Pad Ignition incubator in New Orleans in March 2012. Kinobi Presents During Startup Battlefield, Session Five: Disrupting Learning Q: But it’s not really live, it’s pre-recorded?

7011 DIY 0.02W RGB 5050 SMD LED Emitters - White (50 PCS Para permitir descontos por volume neste site, use o código do cupom: BULKRATE durante o checkout. Você vai ver um desconto aplicado na parte inferior do carrinho de compras. Preços competitivos estão disponíveis. What is Bulk Rate? Looking to get even more? Or Contact Us Directly Kiip, a new model. Real rewards for virtual achievements Prototype - Coin Acceptor - Programmable (6 coin types) - SKU: MCI-PRT-01212 Description Are you trying to make a quick dime from electronics? Why limit yourself to dimes? This coin acceptor will take up to 6 different kinds of coin! Whether you're building your own arcade cabinet or just charging admission to your house, this programmable coin acceptor makes it easy to monetize your next project. The sensors in this coin acceptor use the thickness, diameter and fall time of the coins to identify them and it's fully programmable so you're not limited to any particular type of currency. Simply use the buttons and 7-segment display on the side of the unit to select a coin profile, insert a bunch of coin samples (or the same one, over and over) then designate the value. This coin acceptor also has a coin reject, so your controller can tell the coin acceptor not to take any more coins, as well as a (very loud) alert beeper. Features Documents Share Product

Resumes Are Bullshit. HireArt Is Better. HireArt, a newly launched Y Combinator-backed company, is working to solve a major problem that all employers face today: resumes are bullshit. Job candidates often like to fluff up their experience, and sometimes they even outright lie about their abilities. Other times, potentially great employees are overlooked because they have unorthodox backgrounds that don’t match up with what an employer thinks they need in terms of experience. With its new applicant screening system, HireArt thinks it may have a solution: have the employees actually do the work first. Here’s HireArt’s pitch in a nutshell: “You really can’t bullshit anymore.” That’s per co-founder Elli Sharef, in explaining why the traditional resume system is broken. Instead of asking applicants to talk about their experience, HireArt has them actually perform a series of tasks. “We had varied experiences running interviews – some very good, some not so good,” explains Sharef.

Abort, Retry, Hack? » Blog Archive » OpenLase: open realtime laser graphics Update: see this post for hardware info and also a new GL laser simulator for those without hardware. First of all, as I’m sure everyone knows by now, I’ve been working on hacking the Kinect and writing open drivers for it. There’s a website for the community and a Git repo with the code, and it’s working fairly nicely by now. With that out of the way, here’s a project that I’ve been working on on-and-off for the past year or so. DIY laser projectors commonly use sound cards as DACs. Since we’re converting laser images to audio data, why not just treat the laser data as audio in the first place? On a typical setup, you’d have two processes running on top of JACK. On the other hand, you have whatever picture source you want to use. However, the other big part of OpenLase is libol, a realtime rendering library loosely modeled on OpenGL which lets you produce 2D and 3D graphics on the fly. You can also add filters between the output and the image generator.

The Smoffice: The World's Smallest Office iPhone Apps For Kids By IDEO Toy Lab Trouble waking up? This ejector bed should fix that If you're one of the 7 billion people in this world, you probably have trouble waking up in the morning. An impetuous inventor from the UK has just solved this problem. YouTuber Colin Furze built what he's calling a "High Voltage Ejector Bed," and the name pretty much says it all. Furze built a metal frame which resembles a Murphy bed, except instead of folding backwards to be flush with a wall, it pushes the bed forward away from the wall. An air compressor powers two pistons which push the bed forward at a set speed. In an email sent to Mashable, Furze said it only took two weeks to build and it worked on the first try. Anyone who could still stay asleep when this goes off is not human Anyone who could still stay asleep when this goes off is not human," said Furze in regards to the bed's effectiveness. If this seems dangerous, that's because it probably is. Colin Furze is clearly a man who knows no fear. Have something to add to this story?