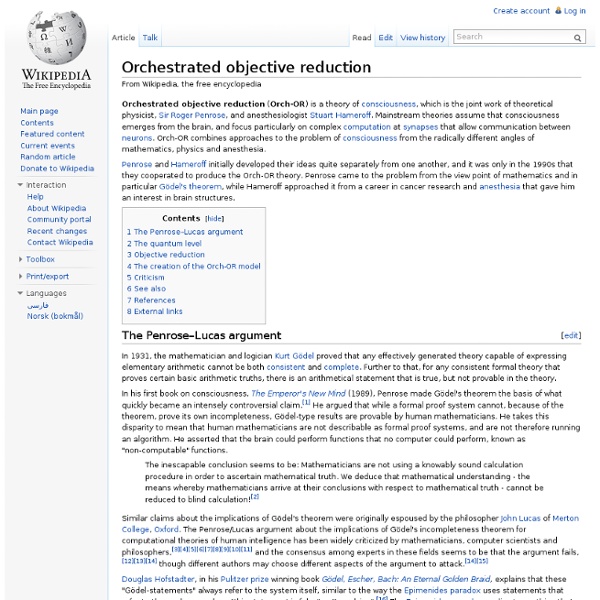 Orchestrated objective reduction (Orch-OR) is a controversial 20-year-old theory of consciousness conceptualized by the theoretical physicist Sir Roger Penrose and anesthesiologist Stuart Hameroff, which claims that consciousness derives from deeper level, finer scale quantum activities inside the cells, most prevalent in the brain neurons. It combines approaches from the radically different angles of molecular biology, neuroscience, quantum physics, pharmacology, philosophy, quantum information theory, and aspects of quantum gravity.[1] The Penrose–Lucas argument[edit] The Penrose–Lucas argument states that, because humans are capable of knowing the truth of Gödel-unprovable statements, human thought is necessarily non-computable.[23] In 1931, mathematician and logician Kurt Gödel proved that any effectively generated theory capable of proving basic arithmetic cannot be both consistent and complete. Criticism of the Penrose–Lucas argument[edit] Objective reduction[edit] Motivation[edit] Related:  Neuroscience

Quantum mind The quantum mind or quantum consciousness hypothesis proposes that classical mechanics cannot explain consciousness, while quantum mechanical phenomena, such as quantum entanglement and superposition, may play an important part in the brain's function, and could form the basis of an explanation of consciousness. It is not one theory, but a collection of distinct ideas described below. A few theoretical physicists have argued that classical physics is intrinsically incapable of explaining the holistic aspects of consciousness, whereas quantum mechanics can. The idea that quantum theory has something to do with the workings of the mind go back to Eugene Wigner, who assumed that the wave function collapses due to its interaction with consciousness. The philosopher David Chalmers has argued against quantum consciousness. Description of main quantum mind approaches[edit] David Bohm[edit] In trying to describe the nature of consciousness, Bohm discusses the experience of listening to music.

The High Cost of Neuromyths in Education Valid neuroscience research is an increasingly useful resource for guiding interventions in education. But not all "neurocontent" is created equal. With the overall rise in accessible education content has come a rise in the niche of neurological educational content -- content developed for educators based on how the brain works. One of the more common snags here is the advent of "neuromyths," or content purportedly based on neuroscience that, while sounding plausible, is incorrect. Neuromyths result from unsupported claims about interventions or products supposedly "proven by neuroscience research." These claims (usually with interventions for sale) are based on research that is either not scientifically valid or not supportive of the specific intervention being promoted. Consider the financial and socioeconomic costs of commercial products falsely claiming neuroscience proof that all learners need what they offer. We study history, in part, to learn from the mistakes of the past.

Resonance and the Quantum-Mind-Reality Field Paradigm Have you ever had one of those moments where everything you do somehow just flows? Where your intention of making things work perfectly manifests as reality? And it just builds and stacks on itself, perfect coincidence after perfect coincidence, leading up to something you never expected to happen? A situation in which pure chance could not possibly explain how it all happened? For the longest time, this idea of "synchronicity" could not be adequately explained by science, so it was thrown out in favor of the cop-out explanation of "confirmation bias", "selection bias", that you're selectively remembering and thinking only those things which lead to that conclusion. Things have changed with our scientific understanding of the world. Resonance ( is an idea that is well known to physics. Resonance occurs with any vibration, any wave. Quantum Biology is an emerging field of science. Think about it like this...

Brain networks 'hyper-connected' in young adults who had depression Depression may be better predicted and understood now that University of Illinois at Chicago researchers have discovered that young adults who previously experienced the mental illness have hyper-connected emotional and cognitive networks in the brain. UIC researchers used functional magnetic resonance imaging to examine the brain connectivity of young adults ages 18 to 23 while they were in a resting state. Thirty unmedicated young adults who had previously experienced depression and 23 healthy controls were used in the study, which has been published online in the journal PLOS ONE. “We wanted to see if the individuals who have had depression during their adolescence were different from their healthy peers,” said Rachel Jacobs, research assistant professor in psychiatry at UIC’s Institute for Juvenile Research, the lead author of the study. “Cognitive control and rumination, as you might expect, are related to each other.

Hard problem of consciousness The existence of a "hard problem" is controversial and has been disputed by some philosophers.[4][5] Providing an answer to this question could lie in understanding the roles that physical processes play in creating consciousness and the extent to which these processes create our subjective qualities of experience.[3] Several questions about consciousness must be resolved in order to acquire a full understanding of it. These questions include, but are not limited to, whether being conscious could be wholly described in physical terms, such as the aggregation of neural processes in the brain. Formulation of the problem[edit] Chalmers' formulation[edit] In Facing Up to the Problem of Consciousness, Chalmers wrote:[3] Easy problems[edit] Chalmers contrasts the Hard Problem with a number of (relatively) Easy Problems that consciousness presents. Other formulations[edit] Various formulations of the "hard problem": "How is it that some organisms are subjects of experience?"" T.H. Responses[edit]

wiki : The Noosphere and The Gaian Mind The only truly natural and real human unity is the spirit of the Earth.—Pierre Teilhard de Chardin The noosphere can be seen as the "sphere of human thought" being derived from the Greek ("nous") meaning "mind" in the style of "atmosphere" and "biosphere". Pierre Teilhard de Chardin became enthralled with the possibilities for humankind, which he saw as heading for an exciting convergence of systems, an "Omega point" where the coalescence of consciousness will lead us to a new state of peace and planetary unity. To this end, he suggested that the Earth in its evolutionary unfolding, was growing a new organ of consciousness, called the noosphere. "It is not our heads or our bodies which we must bring together, but our hearts.... Teilhard de Chardin passed away a full ten years before James Lovelock ever proposed the "Gaia Hypothesis" which suggests that the Earth is actually a living being, a colossal biological super-system. The planet is some kind of organized intelligence. See Also

How curiosity changes our brains Participants in the study were asked to rate how curious they were to find out the answer to a specific trivia question, such as: “What does the term ‘dinosaur’ actually mean?” The participants were then placed in an MRI machine that measures brain activity, based on changes in blood flow when the brain is performing certain tasks. The participants saw the trivia question again followed by the image of a person’s face and were asked to make a specific decision about the person. After the MRI scan the participants completed a surprise test on the answers to the trivia questions and also on their ability to recognize the faces shown during the scan. Example trials from screening and study phases Gruber et al., States of Curiosity Modulate Hippocampus-Dependent Learning via the Dopaminergic Circuit, Neuron (2014) The research revealed three key findings. It seems that in the curious mind, more information is taken in no matter the subject. Motivations matter Stimulating curiosity

The Emperor's New Mind The Emperor's New Mind: Concerning Computers, Minds and The Laws of Physics is a 1989 book by mathematical physicist Sir Roger Penrose. Penrose argues that human consciousness is non-algorithmic, and thus is not capable of being modeled by a conventional Turing machine-type of digital computer. Penrose hypothesizes that quantum mechanics plays an essential role in the understanding of human consciousness. The majority of the book is spent reviewing, for the scientifically minded layreader, a plethora of interrelated subjects such as Newtonian physics, special and general relativity, the philosophy and limitations of mathematics, quantum physics, cosmology, and the nature of time. Penrose states that his ideas on the nature of consciousness are speculative, and his thesis is considered erroneous by experts in the fields of philosophy, computer science, and robotics.[1][2][3] Penrose won the Science Book Prize in 1990 for this book.[4] See also[edit] References[edit]