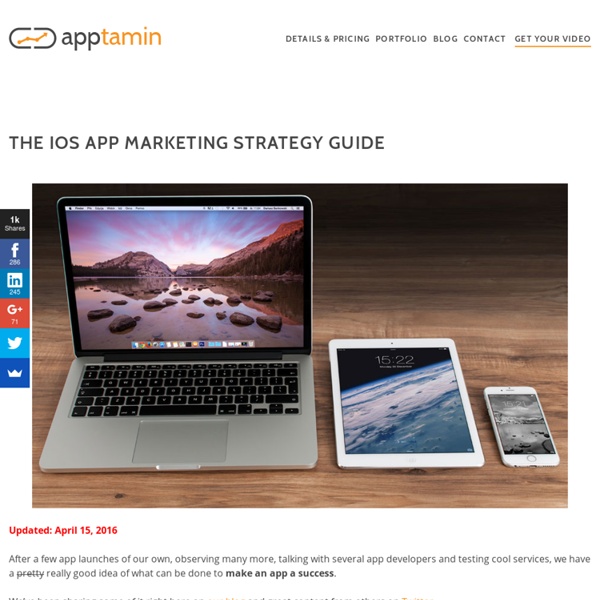 Updated: April 15, 2016 After a few app launches of our own, observing many more, talking with several app developers and testing cool services, we have a pretty really good idea of what can be done to make an app a success. We’ve been sharing some of it right here on our blog and great content from others on Twitter. …and now it’s time for more. We want to answer questions that we have received from readers, like: How would I go about launching a new iOS app? This post is meant to teach you everything we know about launching and marketing an iPad or iPhone app. It’s not a “secret recipe,” and probably not exhaustive (but we are doing our best to make it so). It’s not a step-by-step process either, some of these things have to be done simultaneously. Build Your Personal Online Presence It is essential to establish your personal online presence, independent of your app. When you launch your app, you now have 30,000 followers that you can show your new app to. Validate Your Idea Review Mining No!

iOS vs Android – 2015 Battle Between The Best Platforms Google and Apple are the leaders on the mobile market and their mobile platforms are continuously getting improved, receiving new features which are luring new users. The competition is fierce between them, but each OS has pros and cons, and for a newbie, choosing between iOS and Android can be very difficult. Therefore, we’ll list the advantages and disadvantages of both platforms. iOS iOS receives updates more often than Android and once a new version is rolled out, it reaches millions and millions of supported devices, in short time.

3 Apps to Help You Write a Marketing Plan Join us for a free, live webinar and learn how to drive revenue with content marketing. Tune in 8/4 at 10:30 a.m. PT. Register Now » Microsoft Launches Open Source Tool To Help iOS Developers Port Their Apps To Windows At its Build developer conference earlier this year, Microsoft announced that it would soon release tools that would make it easier for iOS and Android developers to take their existing code and port their apps to Windows. The Android version of this, officially named the Windows Bridge for Android, is now in private beta. The iOS version, however — previously known under the codename “Project Islandwood” — is entering its first public preview today. The code for the Windows Bridge for iOS is now available as an open-source project under the MIT license on GitHub. Microsoft stresses that this is still very much a work-in-progress and some of the promised features are now available yet or are still very buggy.

Android, iOS App Makers Cool to Microsoft's Windows 10 Overtures Microsoft's plan to make its new version of Windows a mobile hit by letting it accept tweaked Apple and Android apps has met an obstacle: some of the software developers the company needs to woo just aren't interested. Windows phones accounted for just 3 percent of global smartphone sales last year, compared with about 81 percent for devices with Google's Android system and 15 percent for Apple and its iOS system, according to research firm IDC. One reason is that Windows doesn't run as many or as attractive apps as its rivals. To boost sales of its phones and new operating system, Microsoft said last month that it would provide tools to software developers to make it easier to design apps for Windows based on apps that run on Android or Apple. But because so few people use a Windows phone, most developers remain focused on the more popular systems and don't see a need to develop apps for Windows. They also said they doubt how easy the new tools will be to use.

Top 50 Marketing Plan Software Tools and Apps The old adage, “If you fail to plan, you plan to fail” fits nearly any aspect of life. But, failing to plan your marketing strategy is a costly mistake that businesses and marketers cannot afford to make. Typically, a marketing plan describes an organization’s advertising and marketing efforts for the coming year. Most marketing plans include a statement of the marketing situation, a discussion of target markets and company position, and a description of the intended marketing mix to reach marketing goals.

Trends for 2015 that going to rule iOS App Development There is doubtlessly iOS Application Development is a deal that no organization can overlook and it would be definitely eye-catchy to perceive what trends 2015 will convey for iOS App Development. There is no need of us for the developers to let them know about continually changing app landscape. Yet, it’s pretty good to pause for a minute and analyse precisely how it’s evolving. For the iOS App market what does 2015 hold? Gartner Reprint 10 August 2016 | ID:G00289779 Analyst(s): Tad Travis, Ilona Hansen, Joanne M. Correia, Julian Poulter Summary BitTorrent brings secure chat app Bleep to iOS BitTorrent has updated and officially launched Bleep, its secure messaging service, bringing it to iOS and adding a Snapchat-a-like "whisper" function that makes messages self-destruct shortly after they're sent. Today's update means the app, which allows users to make free voice calls and stores encryption keys for messages on users' devices rather than in a hackable repository, is now available on Android, Windows, and Mac, in addition to iOS devices. When the new whisper mode is selected, pictures or text sent to another user will disappear 25 seconds after being sent. While users have got past similar Snapchat restrictions by simply taking screenshots of sent messages, Bleep offers some protection against this tactic: when reading messages from a contact, their username is blocked out. The torrent company first launched the messaging app in pre-alpha form for Windows last July, before expanding it to Android and Mac in September.

The 10 Best Explainer Videos...Ever After being inspired by 19 straight hours of VH1's "1,000 Best Music Videos of the '90s", we went out and put together our own top 10 list of the best explainer videos. Each video on this list effectively explains a business, product or service in 2-minutes or less. Best of all, you can find almost all of these talented producers in the creative community here at Video Brewery. Without further ado, here's the top 10! Windows 10: Will 1 billion devices and easily porting Android or iOS code ensure app success? Microsoft has always had a difficult time growing their app offerings on their platforms. When considering business related software Windows remains the de facto standard, however when considering apps like Instagram, Snapchat, and the next big or small app, Windows and Windows Phone have been mostly ignored. Ignoring Windows devices stems from a single issue -- no market share. The problem has been identified and at Build last week Microsoft revealed their plan to solve the issue.