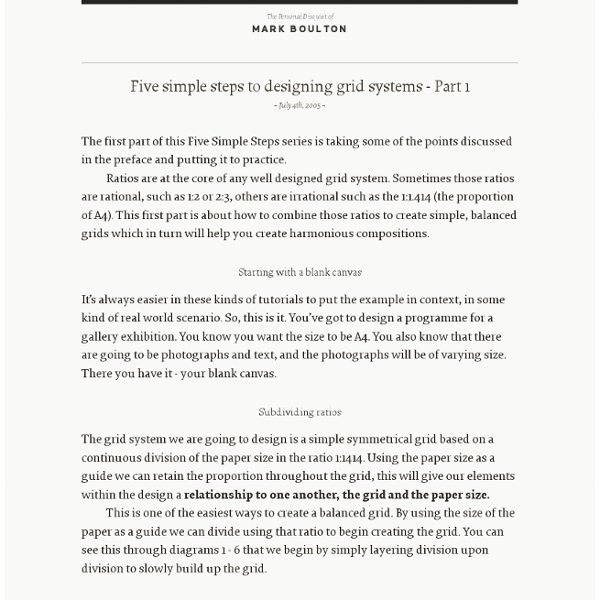 – July 4th, 2005 – The first part of this Five Simple Steps series is taking some of the points discussed in the preface and putting it to practice. Ratios are at the core of any well designed grid system. Sometimes those ratios are rational, such as 1:2 or 2:3, others are irrational such as the 1:1.414 (the proportion of A4). This first part is about how to combine those ratios to create simple, balanced grids which in turn will help you create harmonious compositions. Starting with a blank canvas It’s always easier in these kinds of tutorials to put the example in context, in some kind of real world scenario. Subdividing ratios The grid system we are going to design is a simple symmetrical grid based on a continuous division of the paper size in the ratio 1:1414. This is one of the easiest ways to create a balanced grid. Diagrams kindly updated by Michael Spence Getting creative Many have said grid systems can stifle creativity, but I disagree. So, we have our grid. Short but sweet Related:  new docs

Grid Computing… and Design The layout grid I used for Subtraction Six.5 was improvised and inconsistent — I hobbled it together without much consideration or foresight, more interested in getting something finished than building something that would continue to make sense as I got more and more serious about the writing I post here. Over time, by virtue of repeated use, I became increasingly and lamentably invested in its tremendous shortcomings. When you make fairly liberal use of illustrations in your posts, you essentially wed yourself to the particulars of the CSS you’ve established, creating graphics of a certain width or ordering content in a particular method. It works in the short term, but it presents problems when you sit down to redesign. Boxed In By late this year, it pained me to know that I had written over three hundred posts that relied, in varying degrees, on that dodgy framework. Below: Everybody fall in line. The Old Ways Are Dead

The Human Head So we have been noticing a lot of work popping up on the forum for the competition! One of the things we also noticed was that some of the “head sketches” showing off the product need a little love. I know first hand that people can be very intimidating to sketch! So here is a quick “how to getchyo head right” that I put together to give some guidance on sketching out a quick head for a product sketch. As the final sketches for the competition should be “presentation sketches,” you might think about having a human head somewhere on the page to show how the product lives. Step 1: Sketch (lightly and gesturally) a nice plump circle using your shoulder and arm. Step 2: Lets establish some more guides…Divide the circle again from the halfway line to the bottom with a horizontal line…and then again once more. Step 3: Indicate the eyes at the halfway mark. Step 4: Go down to the next line and work in the nose. Step 5: Next go down to the next guide and hit up some lips.

Frameworks for Designers These days, “framework” is quite a buzzword in web development. With JavaScript frameworks like the Yahoo User Interface library, jQuery, and Prototype getting a lot of attention and web application frameworks like Rails and Django getting even more, it seems like everyone is using some kind of framework to build their sites. But what exactly is a framework? And are they only useful to programmers, or can we web designers benefit from the concept, as well? What is a framework? So that we’re all on the same page, let’s agree—at least for the duration of this article—on this definition of “framework”: a set of tools, libraries, conventions, and best practices that attempt to abstract routine tasks into generic modules that can be reused. To be clear, we’re not necessarily talking about something that is built, packaged, and released to the public. A framework for designers#section2 Chances are, you can benefit from a similar abstraction of CSS code for your web design process.

Prototyping With The Grid 960 CSS Framework Grid 960 is a CSS Framework that enables developers to rapidly prototype designs. They are excellent tools for creating mock ups. Why? Because they do all the heavy lifting allowing you to get faster results. That sounds nice, but how do we do that? Grid 960 works by using classes through inheritance. 60px140px220px300px380px460px540px620px700px780px860px940px Each width corresponds to a class name formed like this: grid_X where X is a number from the above list. When creating a row in the grid, make sure all the child grid_X numbers add up to the number of columns you're using. Visualizing the design's grid is easy. After checking out the visual, you should understand how to create the mockup's grid. The skeleton is ready. Apply the class to correct grid_12 divs and set the ID. The middle columns don't require any effects. Excellent! Sweet. Astute readers may have realized something. Luckily you can maneuver around equal height columns in the top section. Cool! You should get this.

Adapt.js - Adaptive CSS A Detailed Look at the 960 CSS Framework CSS frameworks are bloated. CSS frameworks are for people who don't know how to code. CSS is too simple to implement a framework. If you've ever read a tutorial on a CSS framework, I can guarantee that many comments mimic the previous statements. Pros Rapidly speeds up development time. Cons It's named "960" for a reason. Usage Let's imagine that we want to work with the "12 column" structure to create the extremely simple layout seen below. Specifying an id here isn't required by any means. Grids Now we want to create a simple header and two column structure. I'm going to choose a header width of "940px" (+ 20px margins = 960), a sidebar width of "220px", and a main content width of "700px". You must assign a class to each div. The only additional styling that I've added is background colors and a minimum width for each div to simulate an actual website full of text. Without worrying about margins, floats, or IE hacks, we're able to create a layout extremely fast. You Also Might Like

Creature Spot - The Spot for Creature Art, Artists and Fans Early this year, I was approached by Wizards of the Coast to paint a Magic Card. This was my first card for the game and I was really quite excited to have the opportunity to create work for it! You can click for larger views of the images below: While designing Gahiji, I looked to quite a few different animals for inspiration: babirusa, big cats, bongos and parrots. He needed to feel god-like, majestic and powerful, yet plausible; like something that could live and breathe in the jungle. This card was released in early November as part of the Commander Series. Special thanks to Jeremy, my AD for the project. Formalize CSS - Teach your forms some manners!