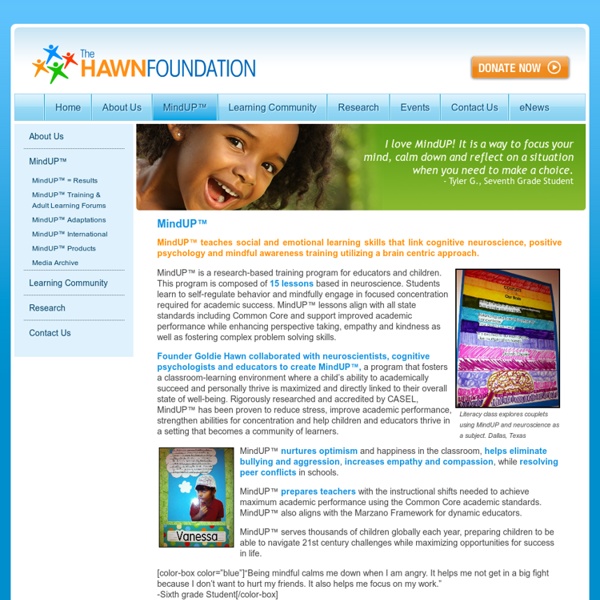 I love MindUP! It is a way to focus your mind, calm down and reflect on a situation when you need to make a choice. - Tyler G., Seventh Grade Student MindUP™ teaches social and emotional learning skills that link cognitive neuroscience, positive psychology and mindful awareness training utilizing a brain centric approach. Literacy class explores couplets using MindUP and neuroscience as a subject. Dallas, Texas MindUP™ is a research-based training program for educators and children. Founder Goldie Hawn collaborated with neuroscientists, cognitive psychologists and educators to create MindUP™, a program that fosters a classroom-learning environment where a child’s ability to academically succeed and personally thrive is maximized and directly linked to their overall state of well-being. MindUP™ nurtures optimism and happiness in the classroom, helps eliminate bullying and aggression, increases empathy and compassion, while resolving peer conflicts in schools. NPC Luncheon with Goldie Hawn

Brain Hemisphere Hat (made of paper) NOTE: This is the now world-famous "Brain Hat." This humble little hat has been distributed around the world, and has been translated into several different languages. If you would like to translate it into another language (one you are fluent in) I would love to post some other language options at the bottom of this page Please contact me about it! Purpose of activity: To learn about (or review) the major lobes of the brain by making a paper hat to wear

How a Radical New Teaching Method Could Unleash a Generation of Geniuses You can read a version of this story in Spanish here. Pueden leer una versión de esta historia en español aquí. José Urbina López Primary School sits next to a dump just across the US border in Mexico. The school serves residents of Matamoros, a dusty, sunbaked city of 489,000 that is a flash point in the war on drugs. There are regular shoot-outs, and it’s not uncommon for locals to find bodies scattered in the street in the morning. To get to the school, students walk along a white dirt road that parallels a fetid canal.

David Harvey's Course on Marx's Capital: Volumes 1 & 2 Now Available Free Online For many people, the arguments and analysis of Karl Marx’s three-volume Das Kapital (or Capital: A Critique of Political Economy) are as relevant as ever. For many others, the work is a historical curiosity, dated relic, or worse. Before forming an opinion either way, it’s probably best to read the thing—or as much of the huge set of tomes as you can manage. (Vol. 1, Vol. 2. and Vol. 3.) Re-imagining education: from Gandhi’s grandson to a school without classrooms A few months ago, on a remote island off the coast of Stockholm, I met another Change Leader who has truly re-imagined learning for the 21st century. Following a tragic case of vandalism in which his school burnt down to the ground, principal Lennart Nilsson asked his local community what they wanted their new school to look like. Parents, policy makers, teachers and pupils collectively decided on a new kind of learning environment – rooted in the ‘real world’ and based on the natural ways children learn. Pupils work in mixed-aged teams of around 75 children and have sub-teams within that group. Instead of following lessons in classrooms, they create projects in flexible, open spaces. Depending on the task, they work with learners of their own age or get together with others who share the same interest.

SAMR Model Explained for Teachers Below is a great video explaining the SAMR model in 120 seconds. SAMR is a framework through which you can assess and evaluate the technology you use in your class. Here is how the video below shared by Candace M explains the SAMR's four levels: Substitution In a substitution level, teachers or students are only using new technology tools to replace old ones, for instance, using Google Docs to replace Microsoft Word. the task ( writing) is the same but the tools are different. Augmentation Though it is a different level, but we are still in the substitution mentality but this time with added functionalities. edutopia Dr. Willis, with her background as a neurologist and classroom teacher, is an authority on brain research regarding learning and the brain and correlations of this research to best teaching practices. After graduating Phi Beta Kappa as the first woman graduate from Williams College, Judy Willis attended UCLA School of Medicine where she was awarded her medical degree. She remained at UCLA and completed a medical residency and neurology residency, including chief residency. She practiced neurology for fifteen years before returning to university to obtain her Teaching Credential and Masters of Education from the University of California, Santa Barbara. She taught in elementary and middle school for ten years before dedicating her time to giving presentations and conducting workshops for educators and parents nationally and internationally.

What is Genius Hour? What is Genius Hour? Genius hour is a movement that allows students to explore their own passions and encourages creativity in the classroom. It provides students a choice in what they learn during a set period of time during school. Teaching “the New Literacy” Submitted by: Tsega Belachew on 09/11/15 Editor's Note: This Op-Ed first appeared on the Thomson Reuters website and is written by Hon. Henry F. De Sio, Jr. He is the Global Chair for Framework Change at Ashoka, and the author of Campaign Inc.: How Leadership and Organization Propelled Barack Obama to the White House. From Degrading to De-Grading March 1999 From Degrading to De-Grading By Alfie Kohn Pour lire cet article en français, cliquer ici. How Does the Brain Learn Best? Smart Studying Strategies In his new book, “How We Learn: The Surprising Truth about When, Where, and Why It Happens,” author Benedict Carey informs us that “most of our instincts about learning are misplaced, incomplete, or flat wrong” and “rooted more in superstition than in science.” That’s a disconcerting message, and hard to believe at first. But it’s also unexpectedly liberating, because Carey further explains that many things we think of as detractors from learning — like forgetting, distractions, interruptions or sleeping rather than hitting the books — aren’t necessarily bad after all. They can actually work in your favor, according to a body of research that offers surprising insights and simple, doable strategies for learning more effectively. Society has ingrained in us “a monkish conception of what learning is, of you sitting with your books in your cell,” Carey told MindShift.