A campaign to celebrate, inspire, and accelerate high-growth entrepreneurship throughout the nation. 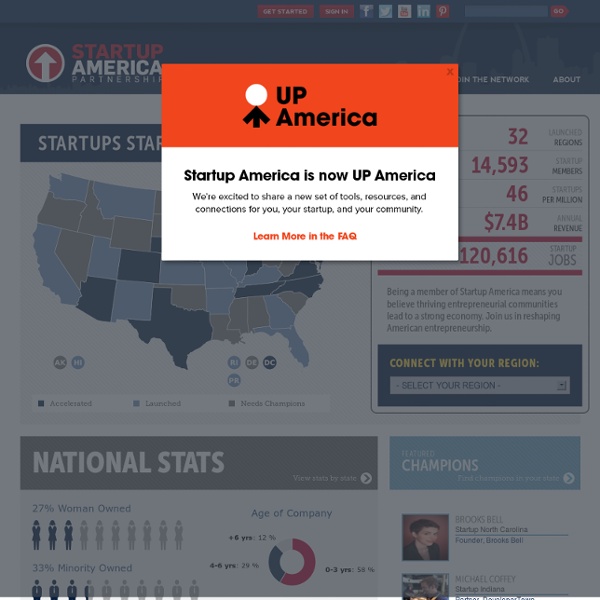 10 Common Mistakes That Startup and Small Companies Make Young companies have small margins for error. Mistakes made early on can sink a company before its gets off the ground. Below is a list of 10 common mistakes made by young, small companies. In the list below, I use the generic term “product” to refer to either a product or a service. Over the next few posts, I will expound on these ideas; for now, here is the list : “Drinking Your Own Kool-Aid” – Overestimating the Enthusiasm for Your Product/Service – thinking your product is more special than your customers perceive. In the entrepreneurial spirit of “under-promise and over-deliver,” here are two more mistakes young companies make: Never Finishing the Product – the “never time to do it right, but there is always time to do it over” syndrome. Disclaimer – as the veteran of six startup companies (two that were successfully sold), these are mistakes I have seen time and again.

Startup America Startup America is a White House initiative that was launched to celebrate, inspire, and accelerate high-growth entrepreneurship throughout the nation. "Entrepreneurs embody the promise of America: the idea that if you have a good idea and are willing to work hard and see it through, you can succeed in this country. And in fulfilling this promise, entrepreneurs also play a critical role in expanding our economy and creating jobs." —President Barack Obama, January 31, 2011 Startups are engines of job creation. In January 2011, President Obama called on both the federal government and the private sector to dramatically increase the prevalence and success of entrepreneurs across the country. Since launch, the Obama Administration rolled out a set of entrepreneur-focused policy initiatives in five areas:

The 5 Things I'd Tell My 21 Year Old Entrepreneurial S... 12 years ago I set out on my first foray into the world of entrepreneurship. The company was called MCSETutor.com (we later changed the name to the equally obtuse 2000Tutor.com) and while it wasn’t a huge success by dot com era standards we did sell it for a tidy profit. But looking back I’m shocked at how little I knew about entrepreneurship. As I’m sure any entrepreneur would love to do, I’d give anything to step back in time 12 years and have a chat with my 21 year old self. And while I can’t do that I do love to share lessons with as many young entrepreneurs as I can. I’ve spoken a bunch at colleges and other organizations for young entrepreneurs. #1 – Take as much risk as you can as early in life as you can. I’m not talking stupid risks. #2 – Nail the fundamentals. Take some of that time and use it to build skills that will make you more effective and productive the rest of your life. #3 – Surround yourself with people who expect you to succeed in a big way. I’m lucky. Fantastic.

Economia Criativa Memória Historiadora lança livro sobre o inconfidente Cláudio Manuel da Costa One dish is served free -- with gratitude -- at Cafe Gratitude | Daily Dish... There’s one dish at Café Gratitude, the new vegan restaurant on North Larchmont Boulevard in Los Angeles, that stands out from the others. It’s called the I Am Grateful bowl. Piled high with shredded kale, quinoa, black beans and garlic-tahini sauce, it's filling, flavorful, healthful and free. That's right. $0. The cafe says it’s the "community supported grain bowl" and lists the dish's suggested value ($7) but doesn't require payment. One customer, Daudi McLean, a vegan chef himself, made his way to the cafe when it first opened. Recently, McLean’s family found themselves without the money they once had. “My son and I used to feed the homeless,” McLean said. It is an idea that the San Francisco-based restaurant chain's co-founder, Matthew Engelhart, and his son, Ryland, one of the general managers in L.A., thought of one Christmas morning about 3 1/2 years ago after seeing how people were being affected by the changing economy. Before every shift, servers are asked two questions.

Do State Business Taxes Really Matter? These days talk about taxes of any kind, unless cuts are being proposed, is the third rail of American politics. Many business people and of course doctrinaire conservatives insist that lower tax rates create more incentives for investment, business formation and economic growth. Tax cuts, they continue, are thus a key mechanism for spurring economic growth. Though we haven’t seen much of the Laffer Curve since the heyday of Reaganism, a new generation of supply-siders is arguing for more tax cuts despite our already-staggering deficits. A new study gives us a new tool with which to measure the effects of state taxes on economic development. The map above by Zara Matheson of the Martin Prosperity Institute maps the index across the 50 states. But to what extent are the tax burdens that states impose on new investment associated with the differences in their economic performances?

Empreendemia COST News Release: Competitiveness of State and Local Business Taxes on New Investment The Council On State Taxation (COST) is pleased to announce the release of a new study ranking states by tax burden on new investment. The study, “Competitiveness of State and Local Business Taxes on New Investment,” is the latest contribution by Ernst & Young in conjunction with COST to the growing field of research in the state and local business tax arena. The study assesses the competitiveness of current state and local business taxes on mobile capital investment on a state-by-state basis.The rankings consider state and local statutory tax provisions and the financial characteristics of the new investments. The analysis focuses on capital investments in industries that have location choices such as factories or headquarters, rather than those like retailers or hotels that are tied to a specific geography. The estimated tax burdens on selected investments are combined to provide an overall measure of the business tax competitiveness of each state. Click here to view the full study.

Need an Investor? 5 Places You Might Not Have Thought to Look In this current economy, it is still very difficult to get a loan or line of credit from a bank for your small business startup. Use a simple CRM like Base to manage your relationships with both potential clients and investors. So your business plan is ready to go and you have an executive summary that will blow the socks right off of any investor. The only issue? You’re struggling actually find one. While theoretically anyone can be a potential investor, below are a few possible areas that will help you jumpstart your search in the hopes of finding the “right one.” 1. Small business owners and entrepreneurs sometimes invest in other businesses too. When approaching a former employer as an investor, you’ve already demonstrated your loyalty and strong work ethic in the past, giving you a leg-up on a complete stranger. 2. Career specialists really stress the importance of students networking with other students and officials in order to secure a job right out of college. 3. 4. 5.