The Age of Imperialism 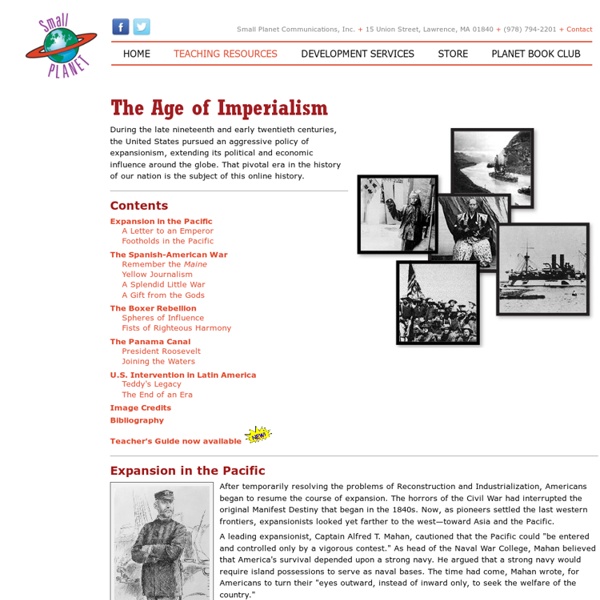 During the late nineteenth and early twentieth centuries, the United States pursued an aggressive policy of expansionism, extending its political and economic influence around the globe. That pivotal era in the history of our nation is the subject of this online history. Expansion in the Pacific A Letter to an Emperor Footholds in the Pacific The Spanish-American War Remember the Maine Yellow Journalism A Splendid Little War A Gift from the Gods The Boxer Rebellion Spheres of Influence Fists of Righteous Harmony The Panama Canal President Roosevelt Joining the Waters U.S. Teddy's Legacy The End of an Era Image Credits Bibliography Teacher's Guide now available Alfred Thayer Mahan After temporarily resolving the problems of Reconstruction and Industrialization, Americans began to resume the course of expansion. A leading expansionist, Captain Alfred T. Commodore Matthew Calbraith Perry American ships had long been active in the Pacific. Commodore Matthew C. [Return to Top] A Letter to an Emperor U.S.S. Capt.

22 Simple Ideas for Harnessing Creativity in the Elementary Classroom Here's an experiment you can conduct in many schools, maybe even the school where you teach. Look through the door of one classroom and you might see the students hunched over, not engaged, even frowning. The teacher looks frazzled, tired and wishing he or she were somewhere else.

The American Revolution - US History Scene The American Revolution was by no means a purely American-British conflict. The fight for American independence piqued the interest of Europe’s most powerful colonial powers. The result of this conflict would not only determine the fate of the thirteen North American colonies, but also alter the balance of colonial power throughout the world. Bracero History Archive The Bracero Program, which brought millions of Mexican guest workers to the United States, ended more than four decades ago. Current debates about immigration policy-including discussions about a new guest worker program-have put the program back in the news and made it all the more important to understand this chapter of American history. Yet while top U.S. and Mexican officials re- examine the Bracero Program as a possible model, most Americans know very little about the program, the nation's largest experiment with guest workers. Indeed, until very recently, this important story has been inadequately documented and studied, even by scholars. The Bracero Program grew out of a series of bi-lateral agreements between Mexico and the United States that allowed millions of Mexican men to come to the United States to work on, short-term, primarily agricultural labor contracts. The Bracero Program was controversial in its time.

21 Things That Will Become Obsolete in Education by 2020 "Within the decade, it will either become the norm to teach this course (high school Algebra I) in middle school or we'll have finally woken up to the fact that there's no reason to give algebra weight over statistics and IT in high school for non-math majors (and they will have all taken it in middle school anyway)." - Shelley Blake-Plock 21 Things That Will Become Obsolete in Education by 2020 by Shelley Blake-Plock Last night I read and posted the clip on "21 Things That Became Obsolete in the Last Decade."

American Indians of the Pacific Northwest Home » American Indians of the Pacific Northwest Collection "For 500 generations they flourished until newcomers came... much was lost; much was devalued, but much was also hidden away in the hearts of the dispossessed... ...Their voices insist upon a hearing and the cumulative wisdom of their long residence in this land offers rich insights to those willing to listen. The challenge now is to find a way to make knowledge of the ancient traditions, the experience of change and the living reality accessible and available..

Proclamation Line of 1763, Quebec Act of 1774 and Westward Expansion - 1750–1775 The British won vast territory in North America after the Seven Years’ War, but with the land came numerous problems of how to govern it. Conflicts arose from the inability of British officials to balance the interests of colonists and Indians, which led to colonial dissatisfaction with imperial rule and, ultimately, to the causes of the American Revolution. The Proclamation Line of 1763—between the red colored colonies and the pink territories The Treaty of Paris of 1763 that ended the Seven Years’ War provided Great Britain with enormous territorial gains.

1896: The People's Party The Rise of Populism The People's Party (or Populist Party, as it was widely known) was much younger than the Democratic and Republican Parties, which had been founded before the Civil War. Agricultural areas in the West and South had been hit by economic depression years before industrial areas. In the 1880s, as drought hit the wheat-growing areas of the Great Plains and prices for Southern cotton sunk to new lows, many tenant farmers fell into deep debt. This exacerbated long-held grievances against railroads, lenders, grain-elevator owners, and others with whom farmers did business. By the early 1890s, as the depression worsened, some industrial workers shared these farm families' views on labor andthe trusts.

Africans on Africa: Colonialism Each day this week, the BBC is looking at African problems through African eyes. Here, Biyi Bandele, a Nigerian playwright living in London, reflects on the legacy of colonialism. When I was growing up in Nigeria in the 1970s, whenever there was a corruption scandal, or when yet another military coup took place, my parents would say, "what we need in this country is a good leader - what we need is a Kwame Nkrumah". Ghana, under the leadership of Kwame Nkrumah, was back in 1957 the first African nation to attain independence. Dozens of other former colonies soon followed Ghana to independence, marking the emancipation of a continent. Of all the nations across Africa, only Ethiopia and Liberia had escaped the yoke of colonialism.

American History Timeline Archaeological evidence has shown that systems similar to the quipu were in use in the Andean region from about 3000 BC. (Wikipedia) Quipu: an ancient Inca device for recording information, consisting of variously coloured threads knotted in different ways. From beginning of fifteenth century at latest, Iroquois Confederation formed according to Engels.