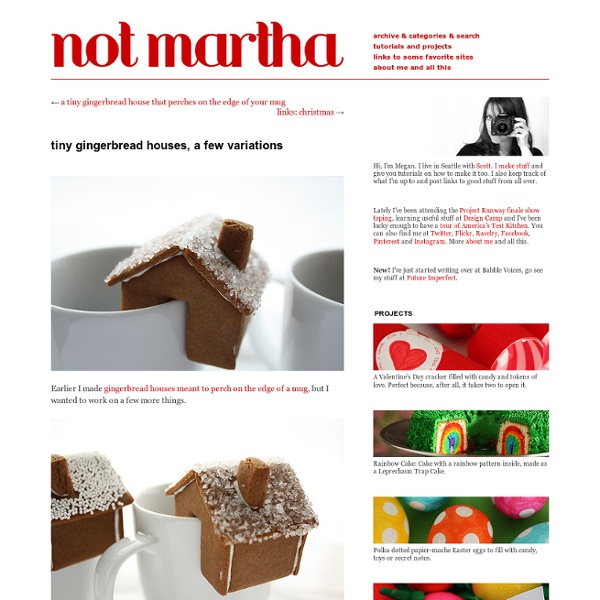 Earlier I made gingerbread houses meant to perch on the edge of a mug, but I wanted to work on a few more things. First, since these are meant to be eaten I wanted to cut down on the amount of royal icing. I still used it to assemble the houses, but to get sugar decorations to stick to the roofs I decided to use simple syrup. I heated one part water and one part sugar and let it bubble for a while on the stove just so it would thicken. After it was thoroughly cooled I put a dot on the roof and spread it around using a small brush I keep to use as a mini pastry brush. Then I sprinkled sanding sugar or nonpareils. Second, I added a chimney. I think it turned out very cute, though I found that the taller chimneys looked incongruous, so I’ll stick to very short chimneys. Third I decided to see what whole happen if I moved the door shape, the part that fits over the mug, off to one side to allow more of the house to hang on the outside of the mug.

Coraline Cookies These bite-size peanut butter buttons are super easy to make and fun to eat. Keep your eyes on them, though. They’ll disappear quickly. You’ll need one peanut butter cookie mix and the ingredients to make… egg, water, oil. Yep. I said easy. Mint Chocolate Chip Cake Chocolate cake and I have had a very interesting romance. I started off with quite an intense dislike of chocolate cake. I KNOW. But try not to judge me too harshly, I had many bad experiences with store-bought dry, dense mudcakes covered in grainy baking chocolate icing.

Hardwood Bookmark I was squaring up a block of mahogany, and I shaved off several “scrap” strips: thin, almost flexible sheets of hardwood. I couldn’t let something so interesting go to waste. “Business cards?” I thought… No, I don’t really have a business. “Name plaque for my office door?” Popsicles! Not to sound full of myself, but I’m pretty sure this is the be all, end all of popsicle roundups. There’s a little something for everyone: the foodies, the purists, the ones who prefer frozen yogurt, the ones who prefer a little alcohol, everyone. Tweny-five options to be exact. The post I did last summer on the cold guys was one of DC’s most viewed ever, so I thought you’d all be up for another round – was I right? Click on the photo to be taken to the recipe. All photos and recipes copyright of their respective source unless otherwise noted.

Chewy Chocolate Gingerbread Cookies Recipe-Martha Stewart Cookies Posted by Grace Massa Langlois on Tuesday, 26th October 2010 Martha does it again with Chewy Chocolate Gingerbread Cookies, a simple cookie recipe that delivers flavour and texture in a big way. I can’t say that I am a big fan of gingerbread cookies but my kids love them! This cookie has a wonderful combination of fresh and ground ginger, cinnamon, nutmeg, cloves, molasses, and my favourites, cocoa and semisweet chocolate chunks.

CREAMY ONE INGREDIENT ICE CREAM It’s raining hard. Really hard. Scary kind of hard . . . lightening . . . thunder . . . wind. It’s o.k. I’m eating Ice Cream! Healthy & good for you Ice Cream. Paper Hasselblad Camera It’s not often that we run across a piece of paper art that is also functional, but that’s just what we have here: set designer and paper aficionado Kelly Angood has recently designed a strikingly lifelike Hasselblad camera made entirely of paper and corrugated cardboard. As you can see from the results below, the pinhole camera gives some very stylish and classic results on it’s medium format 120 film. Want to build one of your own? Angood has been so kind as to share printable plans for a 35mm film version of the camera which should make procuring and developing film much, much easier.

Chocolate Bark Step 1: Prepare the Pan Line a baking sheet with foil, shiny-side up; smooth out the creases. Step 2: Pick Your Ingredients Nutella Chocolate Chip Cookies ***Last Friday night, Brad and I got an invite to an impromptu dinner party...What fun! We were both excited, and of course, I immediately started to think about what I could take along for dessert. I was in the mood for cookies, but not the same-ole', same-ole' variety. I wanted to try something new, but using the ingredients that I had on-hand was a necessity. A trip to the grocery store was not in the cards if I wanted to be on time. So, I began browsing through cookbooks and blogs for just-the-right recipe.

Watermelon Lime Sorbet Slices A sweet and tangy watermelon lime sorbet is a great way to cool off in the summer. As a bonus, this recipe is frozen back in the watermelon rind and cut off into slices. It’s hot. The type of heat where when you step outside the door and your skin is wet before the door swings shut behind you. It’s a hot that hangs in the air, letting you breathe it in, that is cured only by two things: being completely immersed in water or hiding indoors, the air conditioning cranked as far as it will go.I find that the heat makes me very unmotivated to do things like take a walk, water and weed the garden (though I have forced that one on myself) and prepare food and eat it.

Dirkon - The Paper Camera During the 1970s, magazines published in Communist Czechoslovakia were controlled by the state, like the majority of other enterprises. Very few good magazines were available and were difficult to get hold of, so people would borrow and exchange them when given the opportunity. This also applied to magazines aimed at young people, which was probably one of the reasons why almost everyone from my generation, when we get on to the subject of pinhole cameras, has fond memories of the cut-out paper camera known as Dirkon*, published in 1979 in the magazine ABC mladých techniků a přírodovědců [An ABC of Young Technicians and Natural Scientists]. Its creators, Martin Pilný, Mirek Kolář and Richard Vyškovský, came up with a functional pinhole camera made of stiff paper, designed for 35 mm film, which resembles a real camera. It may not be the most practical of devices, but it works! A few notes about the original instructions