32 Of The Greatest Things That Have Ever Happened On Tumblr 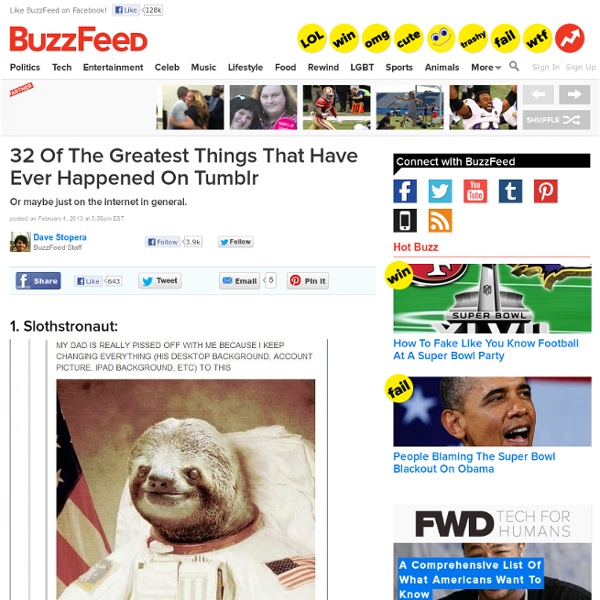 Photo Album 5 Reasons Life Actually Does Get Better In the last year you've probably heard "It gets better" used as a motto to encourage gay teens who've been the victims of bullying. This is not a rebuttal of that, because I am not an asshole. What I do want to do is expand that message to everyone that age, whether you have a bully problem or not. I figure it's time, as I tend to write about dark and often brutally depressing subjects, like how I was a smoldering drunk for over half of my life and how much my parents sucked at being parents. So, as a man with a truly shitty past, let me say that it's not just a slogan. The Money Situation Will Improve (Even if it Doesn't) I'm not saying you'll be rich when you grow up. My girlfriend and I recently broke into the middle class after years of living one paycheck away from homelessness. GettyAbove, a stray one scouts the wild for its next victim. As a kid, you just have to sit back and take it, not fully understanding why you're living the way you are. Getty Photos.comSure, you'll do. Why?

Have You Not Heard? Most Upvoted 572 votes A Pun Fall Out of the Sky 356 votes Watch What Marvel Does When Don Cheadle Tries to Leak the Plot of the Upcoming Avengers Film 196 votes Witness the Stunning Realism of This Dinosaur Costume 132 votes Grouchy Never Seemed So Cute 78 votes Don't Confuse This Awesome League of Legends Cosplay With a My Little Pony Share Tweet Email Have You Not Heard? Favorite By Samthesheep Share: 39 Reposted by and 65 more... More From Cheezburger From Around the Web Recommended by Cheezburger Comments No items at this time... social networking by Facebook Comments Featured Hot Today What Meetings Feel Like For Engineers Prank of the Day: These College Students Pulled Off One of ... The Voice of Winnie the Pooh Tries His Hand at Darth Vader. ... This Five Year Old is More of a 1337 Haxx0r Than You Going Into Labor? #AfterSex is the New Eyeroll-Inducing Instagram Trend Earl Asks for Food in the Most Adorable Way Possible! Two Girls One Pic Faith in Humanity Destroyed of the Day: Girl in Bikini Gets ... No Thanks!

Alternative Sleep Cycles: You Don’t Really Need 6-8 Hours! Most people only think that there is one way to sleep: Go to sleep at night for 6-8 hours, wake up in the morning, stay awake for 16-18 hours and then repeat. Actually, that is called a monophasic sleep cycle, which is only 1 of 5 major sleep cycles that have been used successfully throughout history. The other 4 are considered polyphasic sleep cycles due to the multiple number of naps they require each day. How is this possible? How is this healthy? Well the most important of every sleep cycle is the Stage 4 REM (Rapid Eye Movement) sleep, which has been shown to provide the benefits of sleep to the brain above all other stages of sleep. This way, you still get the benefits of 8 hours of sleep without wasting all of the time it takes to get to REM cycles, resulting in a much more efficient sleep cycle. Uberman Cycle: 20 to 30 minute naps every 4 hours, resulting in 6 naps each day. Everyman Cycle: One longer “core” nap that is supplemented with several 20-30 minute naps. Dymaxion Cycle:

How To Make The Best Grilled Cheese Ever It's Great To Be Alive I think it is safe to say that this may be one of the most up front safety pamphlets I have ever seen. I have never seen the dangers of hiding in a pile of leaves or locking yourself in an ice box spelled out in such a frank manner. This retro safety manual does just that. Via Sad And Useless University