Neurologist Oliver Sacks on memory, plagiarism, and the necessary forgettings of creativity 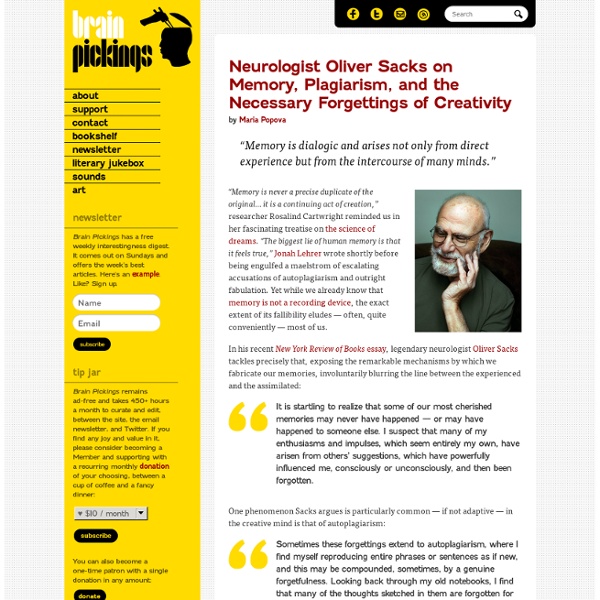 InstallingGCC This page is intended to offer guidance to avoid some common problems when installing GCC, the official installation docs are in the Installing GCC section of the main GCC documentation. N.B. those installation docs refer to the development trunk, the installation instructions for released versions are included in the release sources. For most people the easiest way to install GCC is to install a package made for your operating system. The GCC project does not provide pre-built binaries of GCC, only source code, but all GNU/Linux distributions include packages for GCC. If you cannot find suitable binaries for your system, or you need a newer version than is available, you will need to build GCC from source in order to install it. Many people rush into trying to build GCC without reading the installation docs properly and make one or more of these common mistakes: do not run . Support libraries See Installing GCC: Prequisites for the software required to build GCC. Configuration

Falling Man ON THE MORNING OF 15 AUGUST, India’s Independence Day, it was raining cats and dogs in Delhi. By 7 am, Prime Minister Manmohan Singh was atop the ramparts of the 17th-century Red Fort, hoisting the flag and saluting the assembled soldiers and citizens from behind a glass enclosure. Amid a sea of umbrellas, children who had gathered to watch the parade ran about, as if at a disorderly festival ground; the soldiers and paramilitary troops -paraded on the wet asphalt, completely drenched. It was an unusually gloomy Independence Day, and not merely because of the inclement weather. After his speech, Singh was driven to Congress headquarters at 24 Akbar Road for the party’s own flag hoisting ceremony. Traditionally, the Congress party president presides over the flag raising, but with Sonia Gandhi hospitalised in the US, many predicted Rahul Gandhi would seize the moment and hoist the flag himself. “Just look at the cartoons,” the former minister continued.

A comparison of books for learning assembly language. | All that is wrong with the world... I had wanted to learn assembly for a very long time, at least a year but was very slow getting into it. Part of that, I think, was because I imagined it to be a lot more difficult than it was. The second issue was finding a good guide. There were many different assembly textbooks out there; it was just a matter of choosing the right one. I thought I would quickly write this for people who are in a similar position to what I was in, hopefully narrowing down the choices. James T. The book shows concepts in C with code examples and then shows how they would be implemented in assembly. The Art of Assembly Language – Randall Hyde This was the first book I tried for learning assembly, as I had heard good things about the publisher and this book in particular. I have a good knowledge of concepts like OO and arrays and functions, although I’m not much of a developer. Assembly Language for x86 Processors – Kip Irvine This seemed like a book high on everyone’s list and for good reason. Like this:

Turing Machines First published Thu Sep 14, 1995; substantive revision Tue Jun 26, 2012 Turing machines, first described by Alan Turing in (Turing 1937), are simple abstract computational devices intended to help investigate the extent and limitations of what can be computed. Turing was interested in the question of what it means for a task to be computable, which is one of the foundational questions in the philosophy of computer science. Turing proposed a class of devices that came to be known as Turing machines. The proposition that Turing's notion captures exactly the intuitive idea of effective procedure is called the Church-Turing thesis. Turing machines are not physical objects but mathematical ones. 1. A Turing machine is a kind of state machine. The literature contains a number of different definitions of Turing machine. A Turing machine has an infinite one-dimensional tape divided into cells. The machine has a read-write head which is scanning a single cell on the tape. 1.1. 2. 2.1 Examples 3.

Veronica – RAM Board « Blondihacks Making our girl Turing-complete. It suddenly occured to me that Veronica is missing something rather important which is needed to be called a “computer”. RAM! With all the chaos of developing EEPROM programmers and VGA boards and such, I completely neglected to add any RAM to the main system. Time to remedy that! Luckily, the RAM board is about as simple as things get. Nothing to it! Once again, I’m using 32k DIP SRAMs here, when using a single larger one would be much easier. The RAM board is simply listening for all lower memory addresses, and patching into the bus when it hears them. $0000..$00ff: 6502 zero-page$0100..$01ff: 6502 stack$0200.. One thing to note- the 6502 has a two-phase clock, with a low part and a high part. As you might expect by now, I started by prototyping this circuit on a breadboard to make sure it worked. Obligatory breadboard porn. Sadly, all was not well. One big advantage to etching your own boards is that making late corrections like this is quite easy.

6. Autoconf Building Blocks: Macros The configuration stages of different software packages are never entirely unique. There are repetitive, similar (if not outright identical) tasks that have to be completed for different packages, with more or less sharing between them. To avoid repeating the same code over and over, most programming languages provide the facility of functions; m4 instead, being a macro language, provides macros, which share not only the name but also most of the details with the C preprocessor macros: they are expanded inline, they don't have their own variables' scope, the parameters are not typed, and so on. 6.1. Since autoconf macros are often developed to solve generic problems, rather than specific problems of a project (otherwise direct M4sh code would be good enough for most uses), they are often shared across packages and across projects. There are, though, reusable macros, shipped with various projects or present in archives, such as the Autoconf Archive. Note 6.1.1. Example 1.5. 6.1.1.1. 6.1.2.

Macro Search Path - automake 6.3.2 Macro Search Path By default, aclocal searches for .m4 files in the following directories, in this order: This is where the .m4 macros distributed with Automake itself are stored. depends on the Automake release used; for example, for Automake 1.11.x, = 1.11. This directory is intended for third party .m4 files, and is configured when automake itself is built. This is @datadir@/aclocal/, which typically expands to ${prefix}/share/aclocal/. As an example, suppose that automake-1.11.2 was configured with --prefix=/usr/local. /usr/local/share/aclocal-1.11.2/ /usr/local/share/aclocal/ The paths for the and directories can be changed respectively through aclocal options --system-acdir and --automake-acdir (see aclocal Options). As explained in (see aclocal Options), there are several options that can be used to change or extend this search path. Modifying the Macro Search Path: ‘-I ’ Any extra directories specified using -I options (see aclocal Options) are prepended to this search list.

Applied Project-Based Learning: Building Applications for Low-Cost Hardware Project-based learning is a comprehensive teaching and learning approach that engages students in the investigation of authentic engineering problems1. To make this approach effective, the teacher must identify a problem that is accessible but challenging enough to stimulate the learning process. Unfortunately, many hardware applications are too complex, distracting students from the real task with low-level hardware issues. MATLAB® and Simulink® address this challenge by making it easy for students to implement their projects on low-cost hardware platforms. Two Approaches to the Arduino Blink Challenge A problem may be solved at different levels of abstraction and using different implementation strategies. The problem can be solved using two very different styles: coding and modeling. Solving the Blink Challenge Using Code Communication with the board is reduced to the following straightforward commands: Solving the Blink Challenge Using a Model Figure 1. Inputs from Arduino. Figure 2.

crush beer, crush code (in)security Published on March 20th, 2013 | by Kalen Wessel Developing the Rogue Pi for my final project at BCIT was a great experience. It provided me the opportunity to play around with the Raspberry Pi and build something of valuable use. Instead of copying and pasting my final report into here, I will instead focus on a few points of the project that I found the most interesting. Side Note: A full report with diagrams, installation guides, and all code will be uploaded at a later date. 60 Second Deployment During a security audit scenario, the analyst is planting a device inside a network room. From the moment the Rogue Pi is powered up, it takes exactly 60 seconds for the device to boot-up, start the On Board System Check, and run through the tests. On Board System Check The visual feedback system was definitely the most fun to develop because it gave me the chance to play around with the i2c bus and connect an external component to the Raspberry Pi via the GPIO interface. Tools Tree

Embedded Coding BeagleBoardUbuntu (For BeagleBoardAngstrom, click here.)(Should Beagleboard:Ubuntu On BeagleBone Black be merged into this page?) This page is about running a Linux distribution (ARM EABI) Ubuntu on the BeagleBoard. BeagleBoard will boot the (ARM EABI) Ubuntu distribution from the SD card. Since much of this page is generic, it has also been extended to help support devices such as the PandaBoard and BeagleBone. For the best experience, make sure you have an LCD/HDMI monitor attached to the BeagleBoard's HDMI port, 2 GB/4 GB/8 GB SD card, and a known good USB 2.0 hub with mouse and keyboard. If you need any help: Ubuntu related help: #ubuntu-arm: Ubuntu's ARM IRC on Freenode (logs -> year -> month -> day -> #ubuntu-arm.html)When requesting help, please provide some debugging information: U-Boot Version installed on board Kernel Version: uname -a pastebin dmesg Copy from serial port or use "dmesg | pastebinit" (sudo apt-get install pastebinit) Mainline U-Boot: boot.scr/boot.cmd changes: With 2.6.35: sudo . . .

Environment variables Delhi top human trafficking destination: Study Hindustan Times / Indo-Asian News Service // January 9, 2006 Delhi leads in the number of women and children being trafficked and a majority of the victims were brought for commercial sexual exploitation below the age of 16, says a study. The first-ever survey, titled "Trafficking of Women and Children in India", was brought out by the Delhi-based Institute of Social Sciences (ISS). It was conducted in 12 states across India over a two-and-a-half-year period with interviews from over 4,000 respondents, including 160 traffickers, 412 brothel owners, 582 clients and 929 victims of commercial sex exploitation (CSE). The study shows that human trafficking is a borderless crime and maps the trafficking patterns, which brings to light the high rates of inter-district trafficking in Andhra Pradesh, Karnataka, Tamil Nadu, Maharashtra, Rajasthan, Uttar Pradesh, Bihar and West Bengal.