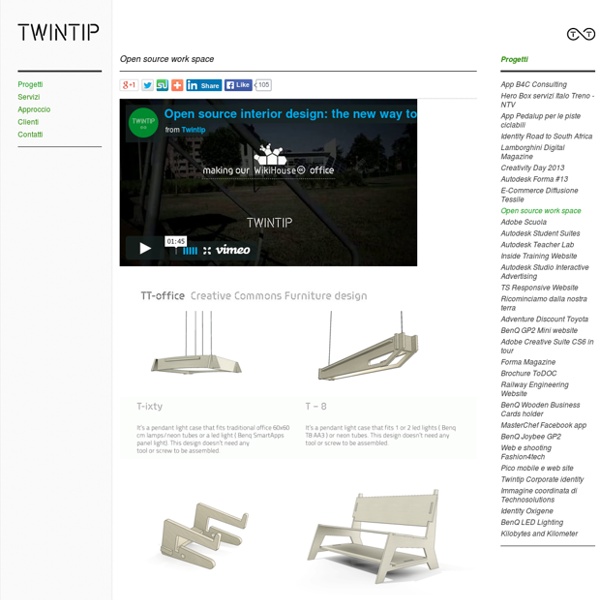 Literary gold mine for CNC millers From 1976 to 1983, Popular Science magazine, along with the American Plywood Association, ran an annual plywood panel project design contest for its readership. Often the winning projects were items of furniture, but that was not a requirement. A potter’s kick wheel and a folding plywood boat are notable exceptions. The rules were simple: Apart from common fasteners, the entire project had to be constructed from one or more panels of plywood, cut to make most efficient use of the material. In 1984, these projects were collected, by original contest editor Alfred W. 1984, of course, was decades prior to the advent of accessible home CNC milling, so all those carefully shaped and slotted parts, at the time, had to be laboriously hand-cut using a jigsaw or similar tool.

Novena | Crowd Supply A new open-hardware computing platform, flexible and powerful, designed for use as a desktop, laptop, or standalone board. Novena is a 1.2GHz, Freescale quad-core ARM architecture computer closely coupled with a Xilinx FPGA. It’s designed for users who care about Free Software and open source, and/or want to modify and extend their hardware: all the documentation for the PCBs is open and free to download, the entire OS is buildable from source, and it comes with a variety of features that facilitate rapid prototyping. Premiums & Pledge Levels We are offering four variations. The prices listed below are 10% higher than they were during the crowdfunding campaign (April 2 - May 18): All configurations will come with Debian (GNU/Linux) pre-installed, but of course you can build and install whatever distro you prefer! This is not a machine for the faint of heart. Stretch Goals After the campaign launched, we decided to offer four stretch goals. Case Design Features “Just the Board” Spec Sheet

CNC Joinery Notebook: Update 1 For about ten years, I have been collecting various clever ways of cutting flat stock to design 3D shapes that slot together in space. Back in April, I posted a long, rambling brain-dump from this personal file under the title “CNC Joinery Notebook.” If you pick up a copy of MAKE’s just-released Volume 33, you’ll find a much-polished version of that article on p.59. Since then, a few more patterns have come to my attention, and I thought the publication of MAKE’s new issue was a good opportunity to share them with you. Three Basic Approaches The design vocabulary of CNC panel construction is evolving rapidly. In his article, Bruce mentions a taxonomy of three rudimentary CNC panel-construction techniques that he attributes to Scott Klinker at the Cranbook Academy of Art: the “stack of sections,” the “grid of sections,” and the “graphic profile” technique. Three approaches to designing a router-cut lounge chair. The first two “sectioning” techniques are amenable to algorithmic design.

Open Source for Humanitarian Action Ushahidi develops free software that allows volunteers to map humanitarian crises from their mobile phones. Angela Oduor teaches two new volunteers to install the Ushahidi platform at the iHub in Nairobi, Kenya. (Photo by Jon Shuler/copyright © 2011 Ushahidi, Inc.) In the days following the Jan. 10, 2010, earthquake in Haiti, chaos prevailed. Transportation was limited, if not impossible. Lines of communication were broken. Even before the disaster, there had been only 108,000 landbased telephone lines in the country, compared with 3.5 million mobile phones. Foremost among the volunteer groups was Ushahidi, an organization founded two years earlier by four tech-savvy activists frustrated by a lack of mainstream Kenyan media coverage of the country’s postelection violence. Since that time, some 17,000 maps have been made, some with the help of Ushahidi’s personnel and volunteer community, but most by people unconnected with the organization. Of course, technology isn’t unimportant.

CNC Panel Joinery Notebook | Make: DIY Projects, How-Tos, Electronics, Crafts and Ideas for Makers I’ve been collecting clever ways of slotting flat stock together since I first read Nomadic Furniture back in 1999, well before the advent of the accessible hobby-class CNC tools that today make manufacturing parts like these pretty easy. Now, the world is full of people designing models, project enclosures, sculpture, furniture, and all kinds of other cool stuff to be assembled from parts made on laser cutters and CNC routers. I keep expecting a definitive book or website to emerge that covers the “bag of tricks” in an organized way, but so far, I haven’t found it. In presenting this material, I want to first acknowledge my respect for the world’s established and ancient traditions of joinery. I may abuse some terms, without meaning to, and I am glad to be corrected by those who are in the know about traditional joinery. To simplify things, at first, I’m only considering joints between two panels. Laser vs. The router-cut version, however, doesn’t work. Biasing Cross (“X”) Joints

The open source revolution is coming and it will conquer the 1% - ex CIA spy | Nafeez Ahmed | Environment Robert David Steele, former Marine, CIA case officer, and US co-founder of the US Marine Corps intelligence activity, is a man on a mission. But it's a mission that frightens the US intelligence establishment to its core.With 18 years experience working across the US intelligence community, followed by 20 more years in commercial intelligence and training, Steele's exemplary career has spanned almost all areas of both the clandestine world. Steele started off as a Marine Corps infantry and intelligence officer. In 1992, despite opposition from the CIA, he obtained Marine Corps permission to organise a landmark international conference on open source intelligence – the paradigm of deriving information to support policy decisions not through secret activities, but from open public sources available to all. But the CIA wasn't happy, and ensured that Steele was prohibited from running a second conference. Today's capitalism, he argues, is inherently predatory and destructive: Dr.

Build Your Own Beautiful Flat-Pack Chair I built this Eames-like chair without touching a single traditional woodworking tool. No, it's not because I'm some kind of Luddite. I just love the immediacy of rendering a chair with 3D modeling software and then cutting out the parts with a CNC machine. Everything snaps together like flat-pack furniture, but without the cheesy fasteners—just mechanically sound through tenons and lap joints. Advertisement - Continue Reading Below To build this chair, you'll need a $25,000, full-size CNC router, such as a ShopBot. Download all the files for this chair here and open the 3D model with a CAD (computer-aided design) application. Reed Young I built this chair at the Visible Futures Lab of the School of Visual Arts in New York City. (Photograph by Reed Young) If you're working from our files, you'll see I've completed the following software steps for you. All set? Now for the fun part: the assembly. Download This Chair

Open CNC Furniture Open design isn’t just for machines and electronics, With the rise in popularity of CNC routers and laser cutters, there is now an expanding open furniture movement. The result is a fabrication movement where designs are shared globally but fabricated locally and parametric design enables infinite configuration for personal fabrication. Every design featured in this article is available for download. Lean Desk – Original OpenDesk, an open-source project commissioned by Mint Digital. Open Desk Edie Set – designed by brothers Joni and David Steiner, for their niece, Edie, when she was 18 months old. The OpenDesk project provides free downloads of designer furniture files that you can CNC. Lynton Pepper’s Wiki Booth was designed to provide extra privacy in shared workspaces. All designs on Open Desk are downloadable, but their attributes are not easily editable to adjust for different material thicknesses or spacial configurations. The Layer Chair Configuring the Layer Chair with Grasshopper