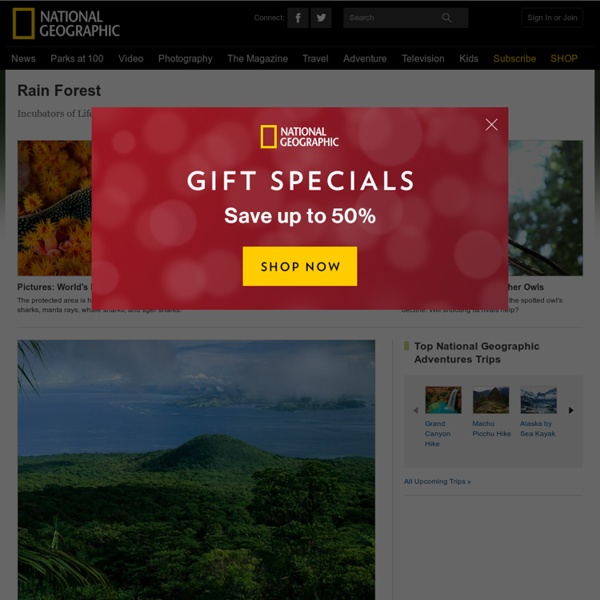 In Brazil, which houses 30 percent of the remaining tropical rain forest on Earth, more than 50,000 square miles of rain forest were lost to deforestation between 2000 and 2005. Biologists worry about the long-term consequences. Drought may be one. Some rain forests, including the Amazon, began experiencing drought in the 1990s, possibly due to deforestation and global warming. Efforts to discourage deforestation, mainly through sustainable-logging initiatives, are underway on a very limited basis but have had a negligible impact so far. The rain forest is nearly self-watering. Plants in the rain forest grow very close together and contend with the constant threat of insect predators. The National Cancer Institute (NCI) estimates that 70 percent of the anti-cancer plants identified so far are rain forest plants. Many trees and plants, like orchids, have been removed from the rain forest and cultivated.

Tropical rainforest A tropical rainforest is an ecosystem type that occurs roughly within the latitudes 28 degrees north or south of the equator (in the equatorial zone between the Tropic of Cancer and Tropic of Capricorn). This ecosystem experiences high average temperatures and a significant amount of rainfall. Rainforests can be found in Asia, Australia, Africa, South America, Central America, Mexico and on many of the Pacific, Caribbean, and Indian Ocean islands.

Rainforest Destruction What can you do to help save the rainforest? Use less paper to help save the rainforest! Paper is made from trees. If you use less paper, fewer trees will be cut down. Using less paper is easy. Land And Habitat Protection Reason #48 to get involved Projects like our Natural Resource Management Plans, which designate zones for wildlife, biodiversity conservation, and tourism development, need funding to continue to benefit the land, wildlife, and local communities. Reason #11 to get involved

Tropical rainforest A tropical rainforest is an ecosystem type that occurs roughly within the latitudes 28 degrees north or south of the equator (in the equatorial zone between the Tropic of Cancer and Tropic of Capricorn). This ecosystem experiences high average temperatures and a significant amount of rainfall. Rainforests can be found in Asia, Australia, Africa, South America, Central America, Mexico and on many of the Pacific, Caribbean, and Indian Ocean islands. Within the World Wildlife Fund's biome classification, tropical rainforests are a type of tropical wet forest (or tropical moist broadleaf forest) and may also be referred to as lowland equatorial evergreen rainforest.[3] Overview

How Humans Affect Animals There are millions of insects, fish, amphibians, reptiles, birds and mammals, but only one kind of human. Human can do good things for animals: help save endangered species by breeding more animals and saving their environment; making sick animals healthy, and caring for animals who can no longer live in the wild. Humans can also cause harm to animals, on purpose or by accident. Practical Plants Polycultures, Guilds & Companions... In addition to each plant being able to record interactions with other individual plants, users can also create polycultures or guilds of known plant combinations that work well together. We are at the very start of our collection of polycultures with The Three Sisters set up as a quick example. You can create your own favourite polycultures here:

Tropical rainforest climate Worldwide zones of Tropical rainforest climate (Af). A tropical rainforest climate, also known as an equatorial climate, is a tropical climate usually (but not always) found along the equator. Regions with this climate typically feature tropical rainforests, and it is designated by the Köppen climate classification. Description[edit] Distribution[edit] Upland rainforest in Borneo. Deforestation Deforestation, clearance or clearing is the removal of a forest or stand of trees where the land is thereafter converted to a non-forest use.[1] Examples of deforestation include conversion of forestland to farms, ranches, or urban use. Deforestation occurs for many reasons: trees are cut down to be used or sold as fuel (sometimes in the form of charcoal) or timber, while cleared land is used as pasture for livestock, plantations of commodities and settlements. The removal of trees without sufficient reforestation has resulted in damage to habitat, biodiversity loss and aridity. It has adverse impacts on biosequestration of atmospheric carbon dioxide. Deforestation has also been used in war to deprive the enemy of cover for its forces and also vital resources. Modern examples of this were the use of Agent Orange by the British military in Malaya during the Malayan Emergency and the United States military in Vietnam during the Vietnam War.

Rainforest Rainforests are forests characterized by high rainfall, with annual rainfall between 250 and 450 centimetres (98 and 177 in).[1] There are two types of rainforest: tropical rainforest and temperate rainforest. The monsoon trough, alternatively known as the intertropical convergence zone, plays a significant role in creating the climatic conditions necessary for the Earth's tropical rainforests. Tropical Tropical rainforests are characterized by a warm and wet climate. Mean monthly temperatures exceed 18 °C (64 °F) during all months of the year.[5] Average annual rainfall is no less than 168 cm (66 in) and can exceed 1,000 cm (390 in) although it typically lies between 175 cm (69 in) and 200 cm (79 in).[6] Many of the world's rainforests are associated with the location of the monsoon trough, also known as the intertropical convergence zone.[7] Tropical rainforests are located in the tropics, i.e., in the equatorial zone between the Tropic of Cancer and Tropic of Capricorn.

Forests: Threats to our forests Deforestation Results of deforestation Forests are cleared all around the world for a number of reasons, including: Harvesting of timber to produce wood and paper products Clearing land for farms, cash-crop plantations, and cattle ranching Clearing land for urban development, including homes and roads. Forests are also being destroyed by acid rain resulting from our pollution-causing activities and through the introduction of disease and invasive species. Tree Encyclopedia Trees have three principle features that distinguish them from all other plants. First, they have a woody stem, roots and branches which do not die back in winter, but continue to grow year after year. From the moment of its germination, a tree remains visible; from the tallest Sequoia to the smallest garden fruit tree, this principle of growth remains constant. Second, trees live longer than any other organism on earth. Trees commonly live more than 1,000 years, and many grow considerably older.