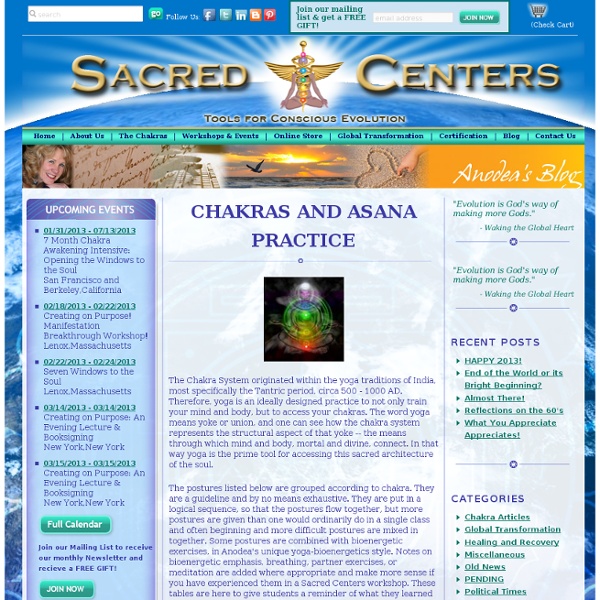 The Chakra System originated within the yoga traditions of India, most specifically the Tantric period, circa 500 – 1000 AD. Therefore, yoga is an ideally designed practice to not only train your mind and body, but to access your chakras. The word yoga means yoke or union, and one can see how the chakra system represents the structural aspect of that yoke — the means through which mind and body, mortal and divine, connect. In that way yoga is the prime tool for accessing this sacred architecture of the soul. The postures listed below are grouped according to chakra. They are a guideline and by no means exhaustive. Seane Corn recently told me…”Anodea, you have had a huge influence on me personally as a student and the impact it has had on me as a teacher. We have two audio recordings of yoga practices: The Chakra Balancing Kit includes a set of seven chakra based sun salutations, with variations for each chakra as a morning practice. Chakra One: Muladhara Bandha: Mula Bandha Color: red

Chakra From an 1899 Yoga manuscript in the Braj Bhasa language. Their name derives from the Sanskrit word for "wheel" or "turning", but in the yogic context a better translation of the word is 'vortex or whirlpool'.[1][note 1] The concept of chakra features in tantric and yogic traditions of Hinduism and Buddhism. Etymology[edit] Sanskrit chakra derives from the Proto-Indo-European *kʷekʷlos; its cognates include Greek kuklos, Lithuanian kaklas, Tocharian B kokale, and English "wheel," as well as "circle" and "cycle".[2] M.

The Spiritual Chakra 8 to 12 The Spiritual Chakra 8 to 12 back to healing index This article is from the Hermes Reality Creator Series Books and or upcoming books. © copyright 1995 - 2015 by Tom DeLiso / Hermes Trismegistus Laws Of Vibrational Energy What does the treatment involve? The patient remains fully clothed as the Reiki healer, using various hand positions, focuses on the main energy points of the body. These areas are known as the major Chakras and there are seven which run down the centre of the body. Minor Chakras can be found on the soles of the feet and the palms of the hands. All areas correspond to the nerve centres affecting the internal organs, the mind and the emotions. Each Chakra also covers each of the major organ that the healing energy flows.The healing experience is different for everyone.

Chakras - Aligning Your Chakras Chakra: Index | Basics | Symbols/Names | Primary 7 | Exercises | Foods | Meditations What Are Chakras? Chakras are our energy centers. They are the openings for life energy to flow into and out of our aura. Their function is to vitalize the physical body and to bring about the development of our self-consciousness. The Power of the Chakras The following is excerpted from Spiritual Clearings: Sacred Practices to Release Negative Energy and Harmonize Your Life (North Atlantic Books 2009) Chakra Assessments The word chakra means "wheel" in Sanskrit.

Sound and the Chakras” - healingsounds.com Sound and the ChakrasBy Jonathan Goldman In 1980 I first began my study of the uses of sound and music as therapeutic and healing modalities. This study ultimately manifested with a Master’s Degree in Independent Study of the Uses of Sound and Music for Healing from Lesley University in Cambridge, Massachusetts. My initial investigation into the area of sound healing was the relationship between sound and the chakras. The word chakra is a Sanskrit term meaning “wheel”, for chakras are seen as spinning wheels of light by those with the ability to see subtle energy. Chakra Purification Meditation A Chakra Purification Meditation The chakra cleansing exercise accomplishes pranayama, pratyhara, and dharana all at once being an excellent preparation before meditation or other practices of laya yoga. It helps us focus within toward awareness of the energy body, based on the classic seven chakras and their seed (bija) syllables. Each chakra has thus a corresponding vibratory sound energy which helps us get in touch with that region. According to classic hatha yoga there are seven chakras and their sounds are approximately:

Write Your Name in Runes Write Your Name in Runes The runic alphabet, or Futhark, gets its name from its first six letters (f, u, th, a, r, k), much like the word "alphabet" derives from the first two letters of the Greek alphabet, alpha and beta. Each rune not only represents a phonetic sound but also has its own distinct meaning often connected with Norse mythology.

Five Tibetan Rites The Eye of Revelation by Peter Kelder The Five Tibetan Rites are also referred to as "The Five Rites", "The Five Tibetans" and "The Five Rites of Rejuvenation".[6] Booklet[edit] Chakra Meditation - Bhuta Shuddhi - Yoga and Tantra Meditation Chakra Meditation Bhuta Shuddhi Purifying the 5 Elements by Swami Jnaneshvara Bharati SwamiJ.com Bhuta Shuddi is an ancient Chakra Meditation of Yoga and Tantra practice through which the five elements (bhutas) are balanced or purified (shuddhi). Bhuta refers to the past, and shuddhi refers to purifying that past, or the samskaras that operate in conjunction with the five elements. This is a very useful practice, whether you think of it as preparation for kundalini awakening, or simply as a practice for feeling balanced, centered, or tranquil, etc.

New Age Spirituality New Age, also referred to as the New Age movement or New Age Spirituality, is a spiritual movement whose purpose is to seek the Universal Truth, and for each human to reach its highest potential. The term 'New Age' was used as early as 1809, in an epic poem called 'Milton a Poem', written and illustrated by William Blake, while the elements of today's New Age first started appearing in the 1900s in metaphysical spiritual movements such as Theosophy, Spiritualism or New Thought. In the words of Deepak Chopra, the New Age Supersage*: "When your truth is aligned with the Truth of universal consciousness, you are living your dharma...living a blissful existence. You are "surfing the wave of Truth" - letting it propel you into the next phase of your life while it delivers the thrill of the present moment."

We live in a world where we have to hide to make... - StumbleUpon Bodhisattva Quotes "At night I dream that you and I are two plants that grew together, roots entwined and that you know..." follow me → Newer