Educational Technology and Mobile Learning: 10 Must Have Resources to Teach about Copyright and Fair Use 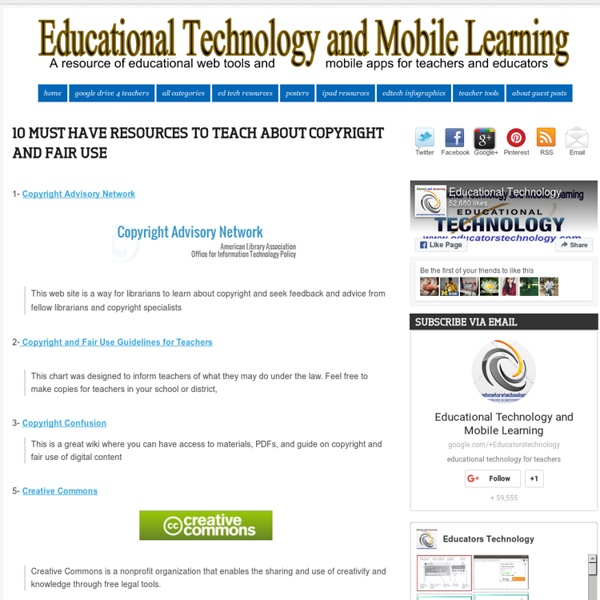 1- Copyright Advisory Network This web site is a way for librarians to learn about copyright and seek feedback and advice from fellow librarians and copyright specialists 2- Copyright and Fair Use Guidelines for Teachers This chart was designed to inform teachers of what they may do under the law. 3- Copyright Confusion This is a great wiki where you can have access to materials, PDFs, and guide on copyright and fair use of digital content 5- Creative Commons Creative Commons is a nonprofit organization that enables the sharing and use of creativity and knowledge through free legal tools. 6- CyberBee I must say that this is really a great interactive website that teaches students everything on copyright issues. 7- Fair Use Evaluator This tool helps you better understand how to determine the "fairness" of a use under the U.S. 8- Taking The Mystery out of Copyright Just as its name indicates, this is a web tool to help your students better understand and use copyright 9- Copyright Kids Related:  Education aux médias

50 Activities To Promote Digital Media Literacy In Students Literacy is changing–not at its core necessarily, but certainly at its edges as it expands to include new kinds of “reading.” Digital media is quickly replacing traditional media forms as those most accessible to most 21st century learners. The impact of this change is extraordinarily broad, but for now we’ll narrow it down to changes in how learners respond to the media they consume. The most fundamental pattern of formal academia is to read something and then write about it. Sometimes this writing comes in the form of responding to questions, while other time it’s in the form of an essay. And sometimes the reading is watching, playing with, or otherwise interacting with a digital media. Some of these tasks will look familiar, especially to English teachers. You also might notice that many of them apply to both traditional and digital media. I’ll be updating this list, revising it to add better examples, alter clunky phrasing, and so on. Image attribution flickr user flickeringbrad

6 Best Desktop eBook Readers For Reading At Home (Or At Work) Do some reading on your computer. Whether you’re looking for free access to classic works of literature or desktop access to your current Kindle, Kobo or Nook books, there is a wide variety of eBook readers out there so you can read on your computer. Reading on a computer isn’t without its advantages. More than anything, though, reading on a computer is nice because it’s a device you already have. Here’s a list of what I think are the best desktop eReaders out there. Calibre: The Ultimate eBook Software Sometimes called the iTunes of eBooks, Calibre is the ultimate way to manage your collection on a desktop computer. This program does too much for me to describe here, so find out all about Calibre in Open Book: Managing Your eBooks With Calibre, a free MakeUseOf download. Know this too, though – Calibre features a full-featured eBook reader as well as collection management. Google Books Prefer using something in your browser? Firefox EPUB Extension Magic Scroll Kindle Kobo Nook Conclusion

Walking Dead publisher drops DRM | Tech Culture The publisher of the Walking Dead, Saga, Witchblade, and the Savage Dragon announced on Tuesday that it's closing the book on digital rights management. New books from Image Comics are now available for digital download from its online store without DRM. Readers can purchase new books from ImageComics.com in several platform-agnostic formats: PDF, EPUB, CBR, and CBZ. Ron Richards, Image Comics' marketing honcho, told the comics news site ComicBookResources that the DRM-free books would benefit comics creators the most. One of the first comics available DRM-free is Scatterlands, a collection of the free webcomics by writer Warren Ellis, a noted futurist and anti-DRM advocate, and artist Jason Howard.

A Printable Guide To Creative Commons Something you probably see a lot of these days as you browse the internet is Creative Commons licensing. You’ll see many graphics that say something like ‘shared under a Creative Commons license’, or you’ll see a little rectangular graphic with some signs in them. Since we live in an age where most of our information comes from the internet in some way or another, its useful to know when and how it is ok to use something that you’ve found. These licenses allow you to easily give others the opportunity to share your work.

TIC&TOC du web, le blog des bibliothèques valentinoises untitled vanityfair Crain was more than an agent, Lee would tell friends years later; he was her friend, critic, business adviser, champion, and marketer. He may have been even more. “About Nelle. I am rather worried about her,” Capote wrote in a 1961 letter to friends in Kansas. “Just between us, I have good reason to believe that she is unhappily in love with a man impossible to marry, etc.” ‘When Maurice became ill, he asked Elizabeth Otis, who was the president of McIntosh & Otis, if she would take on—given the authors’ approval—his list, which McIntosh & Otis did,” Julie Fallowfield, Lee’s beloved agent there until 1996, told me. Steinbeck felt so indebted to M&O that he reportedly gave it a percentage of the money he was awarded when he won the 1962 Nobel Prize for literature. “During its decades of representation, M&O acted appropriately and in Harper Lee’s interests, handling the kinds of activities that are the business of a literary agent,” Lee stated in her lawsuit. Valuable Estates

Couv. ill. en coul. exploring the potential of mobile tools for delivering library services : 23mobilethings We are all in this together - The Hill's Congress Blog Earlier this month, Netflix made history with its original series “House of Cards” by garnering nine Emmy nominations, including best drama series – the first time that television’s leading award has recognized a program delivered exclusively online. Many media outlets interpreted this nomination to mean that we had finally ushered in the Internet television era now that an increasing number of consumers access programming through the Internet. Just a week after the Emmy nominations, the House Judiciary Committee held the first of a series of hearings to better understand the role of copyright and technology. In ending the contentious SOPA/PIPA debate, Congress has already considered and rejected the attempt to impose broad new regulations on the Internet industry, which now accounts for 21 percent of GDP growth. That debate served as a jumping off point for bilateral conversations between the content community and the Internet industry. The market is working.