Finding the right moment (and many more YouTube tricks) 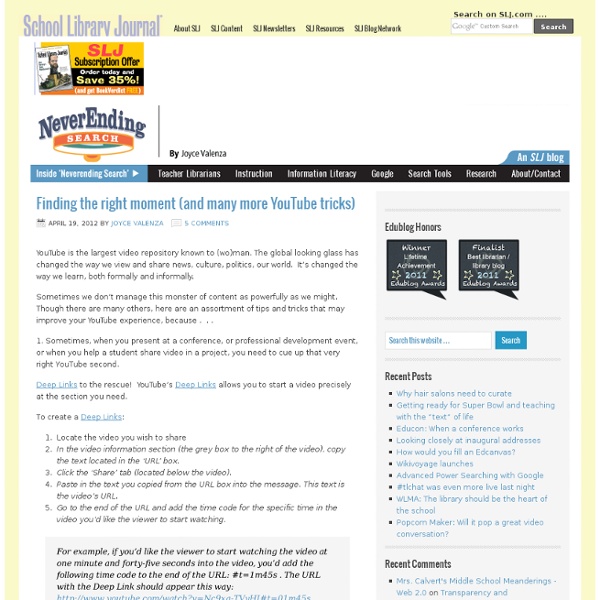 Lesson Plans History American Government High School - USHistorySite.com 101 Great Sites for Social Studies Class 1.) The Library of Congress is a great source to find historical documents, photos, art, maps, audio and video, artifacts and other items. The American Memory section organizes items based on topics, time periods and places of American history. The World Digital Library, a cooperative project with UNESCO, includes rare documents from around the world. 2.) 3.) 3.1) EDSITEment "offers a treasure trove for teachers, students, and parents searching for high-quality material on the Internet in the subject areas of literature and language arts, foreign languages, art and culture, and history and social studies."

Advanced Placement Scores, Courses & Exam Center | AP Central - APC Members Home Hiroshima after the Atomic Bomb (3 of 5) by Harbert F Austin Jr The eight islands of Japan sprang into existence through Divine Intervention. The first two gods who came into existence were Izanagi no Mikoto and Izanami no Mikoto, the Exalted Male and Exalted Female. It was their job to make the land for people to live on. They went to the bridge between heaven and earth and, using a jewel-encrusted halberd, Izanagi and Izanami churned up the sea into a frothy foam. As salty drips of water fell from the tip of the halberd the first island was formed. Its name was Onogoro. So far, so good. The next time they met, Izanagi was sure to speak first, ensuring the proper rules were followed, and this time they produced eight children, which became the islands of Japan. I'm sure you did not fail to miss the significance of this myth for the establishment of Japanese formal society. At present, Japan is the financial capital of Asia. Technically there are three thousand islands making up the Japanese archipelago. Text by Steve Smith.

AP* United States History - Key Terms, Outlines, Sample Tests Are you tired of using the same old textbook, but your school budget makes it impossible to even consider a new book adoption? Are you looking to productively take advantage of the myriad of online resources? For less than the cost of one classroom textbook, you can purchase for ALL OF YOUR STUDENTS the most up to date world history book on the market. Our World's Story shares not only the most critical tales, turning points and traditions of world history, but also includes the major issues facing the world in 2013. Check out OURWORLDZSTORY.COM *AP and Advanced Placement Program are registered trademarks of the College Board, which was not involved in the production of this web site. font>

AMERICAN HISTORY - The Learning Network Blog One example of the new Science Take video series. As our regular readers know, the mission of this blog is to find New York Times content suitable for teaching and learning — then, via lesson plans, writing prompts, quizzes and more, suggest ways for teachers to use it. In the course of our daily scavenging, we naturally pay close attention to the sections and features that most people think of first when they think “New York Times”: breaking news, Op-Eds and editorials, reviews, multimedia and photojournalism, important special reports and, increasingly, video. But we also regularly search a number of other, less well-known features of the paper that reliably yield curricular gold. When we present them at workshops and conferences, however, many teachers tell us they’re hearing about them for the first time. Below, we’ve compiled our essential list, categorized by subject area. How do you use these features?

Political Cartoons Illustrating Progressivism and the Election of 1912 Background The Progressive Era, as the period in history at the turn of the 20th century has come to be known, was a time of tremendous social, economic, and political changes, and the presidential election of 1912 typified the reform spirit of the period. Beginning in the late 1800s with the challenge to the "spoils system" of machine politics, progressivism gathered momentum between 1900 and 1916, as the desire for reform permeated the minds of the American people. Reformers themselves were a diverse group, frequently with different views, but always the same general purpose-- to reform America. The more famous reform leaders of the day reflected the diversity within the various reform groups. As president from 1901 to 1908, Theodore Roosevelt believed it was his duty to define the major problems of the day and to offer solutions. Having stated in 1904 that he would serve no more than two terms, Roosevelt endorsed Senator William Howard Taft as the Republican nominee in 1908.