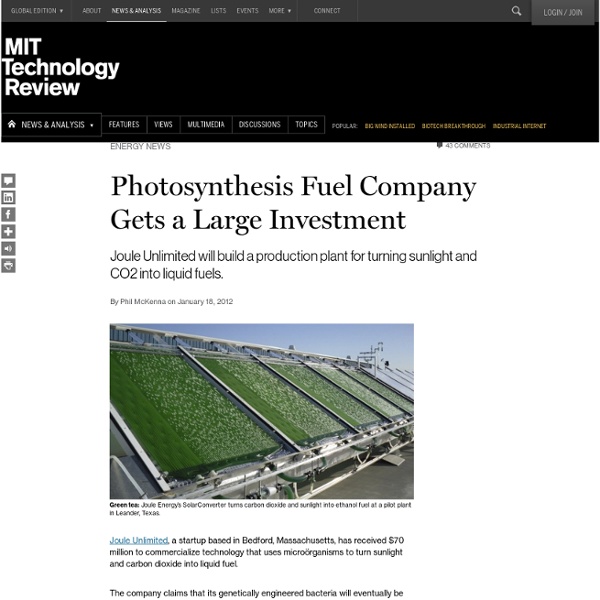 Green tea: Joule Energy’s SolarConverter turns carbon dioxide and sunlight into ethanol fuel at a pilot plant in Leander, Texas. Joule Unlimited, a startup based in Bedford, Massachusetts, has received $70 million to commercialize technology that uses microörganisms to turn sunlight and carbon dioxide into liquid fuel. The company claims that its genetically engineered bacteria will eventually be able to produce ethanol for as little as $1.23 a gallon or diesel fuel for $1.19 a gallon, less than half the current cost of both fossil fuels and existing biofuels. The new funding comes from undisclosed investors and will allow the company to expand from an existing pilot plant to its first small-scale production facility, in Hobbs, New Mexico. Joule Unlimited has designed a device it calls the SolarConverter, in which thin, clear panels circulate brackish water and a nitrogen-based growth medium bubbling with carbon dioxide.

‘Artificial leaf’ makes fuel from sunlight Researchers led by MIT professor Daniel Nocera have produced something they’re calling an “artificial leaf”: Like living leaves, the device can turn the energy of sunlight directly into a chemical fuel that can be stored and used later as an energy source. The artificial leaf — a silicon solar cell with different catalytic materials bonded onto its two sides — needs no external wires or control circuits to operate. Simply placed in a container of water and exposed to sunlight, it quickly begins to generate streams of bubbles: oxygen bubbles from one side and hydrogen bubbles from the other. The creation of the device is described in a paper published Sept. 30 in the journal Science. The device, Nocera explains, is made entirely of earth-abundant, inexpensive materials — mostly silicon, cobalt and nickel — and works in ordinary water. “I think there’s going to be real opportunities for this idea,” Nocera says.

MIT Researchers are Printing Solar Cells on Sheets of Paper  Published on August 20, 2011 by admin · No Comments Geek.com Solar power is a great alternative energy source, but it’s unfortunately a rather expensive one. However, researchers at MIT are working on a new and less-expensive way to make solar cells which involves printing them directly on to fabric or paper. We’re not talking about any fancy paper or fabrics. The MIT researchers discovered the printing process works on just about any paper, from regular printer paper, to tissue paper, and even to already-printed newspaper. It’s a much easier method than the current one, which needs super high-temperature liquids at several hundred degrees Celsius to create the cells. The substrate of the current method is usually glass and requires a number of other components that are expensive and result in a heavy, rigid object – and that’s not even taking into account the installation costs. Read Entire Article HERE

We dump 8 million tons of plastic into the ocean each year. Where does it all go? What happens to all our plastic bottles and lids and containers after we toss them out? Every single ocean now has a massive swirling plastic garbage patch The vast majority of plastic trash ends up in landfills, just sitting there and taking thousands of years to degrade. But there's another big chunk that finds its way into the oceans, either from people chucking litter into waterways or from storm-water runoff carrying plastic debris to the coasts. Now we can finally quantify this problem: A new study in Science calculates that between 5 and 13 million metric tons of plastic waste made it into the ocean in 2010 alone. Plastic debris in the Mediterranean Sea. And here's another surprise twist: We still don't know where most of that ocean plastic actually ends up. Yet those patches accounted for less than 1 percent of the plastic thought to be in the oceans — and no one quite knows where the other 99 percent went. China accounts for one-quarter of plastic ocean waste (Jambeck et al 2015)