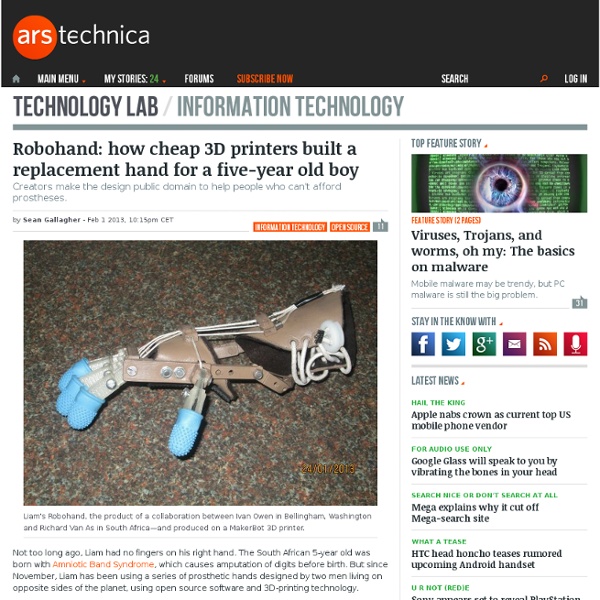 Not too long ago, Liam had no fingers on his right hand. The South African five-year old was born with Amniotic Band Syndrome, which causes amputation of digits before birth. But since November, Liam has been using a series of prosthetic hands designed by two men living on opposite sides of the planet, using open source software and 3D-printing technology. Now, those two men—Ivan Owen in Bellingham, Washington and Richard Van As in South Africa—have published the design for Robohand, the mechanical hand prosthesis, on MakerBot's Thingiverse site as a digital file that can be used to produce its parts in a 3D printer. They've intentionally made the design public domain in the hopes that others around the world who don't have access to expensive commercial prosthetics (which can cost tens of thousands of dollars) can benefit from it. The project began with a mechanical hand Owen made for a science fiction convention in 2011. Last November, the two prepared to meet for the first time. Related:  3D Printing (old)

3D Printing Revolution: the Complex Reality 3D Thursday is a feature about CNC Machining, 3D Printing, 3D Scanning, and 3D design that appears in MAKE every Thursday. This miniature, high-precision assembly started with a CAD model and not much more. It cost about $10 to make it at home – with no 3D printer required. In the past couple of years, the concept of low-cost 3D printing has captured the hearts and minds of millions of geeks. The allure of an upcoming manufacturing revolution has seeped into the mainstream, too: take The Economist, which ran about two dozen articles about this technology within the last year alone. Something must be in the air! The charm of 3D printing is easy to understand, especially as it coincides with the renaissance of the DIY movement on the Internet. After all, affordable and hobbyist-friendly manufacturing tools that convert polygons into physical objects have been available for more than a decade. Roland MDX-15 – a desktop-sized, enclosed CNC mill popular with jewelers. Where do we really stand?

The World’s First 3D-Printed Building Will Arrive In 2014 (And It Looks Awesome) Sure, 3D printing is fun and cute. And products like the Makerbot and Form 1 will most certainly disrupt manufacturing, even if it’s only on a small scale. But the possibilities of 3D printing stretch far beyond DIY at-home projects. In fact, it could entirely replace the construction industry. We’ve already seen folks at MIT’s Research Labs working on ways to 3D print the frame of a home in a day, as opposed to the month it would take a construction crew to do the same. The architect’s name is Janjaap Ruijssenaars of Universe Architecture, and his project is a part of the Europan competition, which lets architects in over 15 different countries build projects over the course of two years. Ruijssenaars will work with Italian inventor Enrico Dini, founder of the D-Shape 3D printer. The final product will be a single flowing design, a two-story building. Here’s the project in Ruijssenaars’ words: One surface folded in an endless möbius band. [via 3ders.org]

Nora Šitum: Coming to America A five year-old Croatian girl, Nora Šitum, is suffering from acute lymphoblastic leukemia and needs immediate treatment. Although the economic situation in Croatia is in crisis – the country’s debt was just lowered to junk status last week – within just a few days, the family had raised the $590,000 for Nora’s treatment at the Children’s Hospital of Philadelphia. She is front-page news in Croatia, and the story is proving to be something of a PR headache for a Philadelphia hospital and the American Embassy in Zagreb. Her story made the front page of social media site Reddit Wednesday morning (but was later removed due to an editorialized title). After all that money had been raised so quickly, Croatian media reported yesterday that the Hospital had informed Nora’s family that the charge would actually be just over $834,000. The Šitum family has been in close touch with the US Embassy’s consular staff, and visas for Nora and her family were expected to be issued Wednesday afternoon.

Google Slick Trick Adds Much-Needed Shine to 3-D Printed Parts | Wired Design Squirrels before and after — the parts on the right have the mirror finish usually only found on injection-molded parts. 3-D printers have progressed a lot in the past couple years, but still can’t rival the output of injection-molding machines without violating expensive, patented post-processing techniques. Enthusiasts have been trying to smooth their printed parts for years by submerging them in acetone or brushing the liquid solvent on by hand — both of which led to unhealthy amounts of chemical exposure and less-than-impressive parts. Now, makers Austin Wilson and Neil Underwood have developed a process that can approximate the results of professional molding machines with only a hot plate, mason jar, and a few ounces of acetone nail-polish remover. ABS-based printed parts are placed in the jar with the acetone and heated to 90 degrees Celsius on the hot plate. This $10 setup can rival machines that cost tens of thousands of dollars. Photos: Austin Wilson

the pure core organic life mirror | geodesic domes p i c t u r e d : hub and strut wood frame dome for studio and living spaces / collapseable shelter system and growing dome for food production what is a geodesic dome? geodesic: the most economical relationship between any two events economic: using the minimum of time or effort or resources required for maximum effectiveness geodesic domes apply modern technological know-how to shelter construction, make shelter more comfortable and efficient, and make shelter more economically available to a greater number of people in a diverse array of environmental conditions geodesic domes are structured after the natural system of humans and trees with a central stem or backbone, from which all else is independently hung, utilizing gravity instead of opposing it - resulting in a construction similar to an airplane - light, taut, and profoundly strong * hub and strut timberline dome gallery - care and maintenance tips, benefits of dome living...

EXCLUSIVE: Croatian Child With Leukemia To Receive Experimental Treatment At CHOP CBS Philly (con't) Affordable Care Act Updates: CBSPhilly.com/ACA Health News & Information: CBSPhilly.com/Health Get Breaking News First Receive News, Politics, and Entertainment Headlines Each Morning. Sign Up By Todd Quinones PHILADELPHIA (CBS) – An experimental treatment CHOP might just be able to save a 5 year old’s life. People in Croatia are rallying behind her and trying to help her family raise the more than $800,000 needed to pay for it. Just days ago, her parents thought they were out of options. Five-year-old Nora Situm arrived Thursday evening at Philadelphia International Airport wearing a protective mask. She’s receiving medical treatment, and two of her doctors made the trip with her and her parents from Croatia. “This is the only chance that she has. The little girl is battling leukemia, but she’s about to undergo a new gene therapy treatment at CHOP that’s only been used on 13 other patients. Nora’s journey here started in part on Facebook in Croatia.

MakerBot Announces Its First Easy-To-Use Desktop 3D Scanner, The Digitizer Bre Pettis, founder of 3D-printer manufacturer MakerBot, announced their first desktop 3D scanner, the Digitizer, at a SXSWi keynote today. Pettis was coy about availability or final design but instead was focused on making a splash at the event. “We’re excited to put ourselves out there with the announcement. Officially called the MakerBot Digitizer Desktop 3D Scanner, the device will work in concert with the MakerBot printer to complete the constellation of services MakerBot offers. According to today’s release, the design shown at SXSW is a prototype and there is no launch date slated although Pettis said it would be available “this Fall.” Pettis, for one, is excited. “It’s a natural progression for us to create a product that makes 3D printing even easier. “It’s going to be another pathway for people to make 3D models,” he said. UPDATE – I’ll be posting live photos from the event.

Algae-powered apartment complex blooms in Hamburg Today, here’s a look at a freshly completed residential complex in Hamburg, Germany, where even Slimer would feel right at home. And while it may not contain an ounce of ectoplasm, tiny photosynthetic organisms commonly associated with pesky green slime are key to the zero-energy structure’s groundbreaking renewable energy systems. As the world’s first building powered by algae, the 15-unit Bio Intelligent Quotient (BIQ) House generates biomass and heat with the assistance of 129 integrated glass bioreactor panels (read: microalgae harvesters) measuring .78 inches thick and covering approximately 2,150 square feet of the four-story structure's southeast and southwest facing sides. The algae flourish and multiply in a regular cycle until they can be harvested. The BIQ has a holistic energy concept: it draws all of the energy needed to generate electricity and heat from renewable sources — fossil fuels remain untouched. Very cool. Related alternative energy stories on MNN: