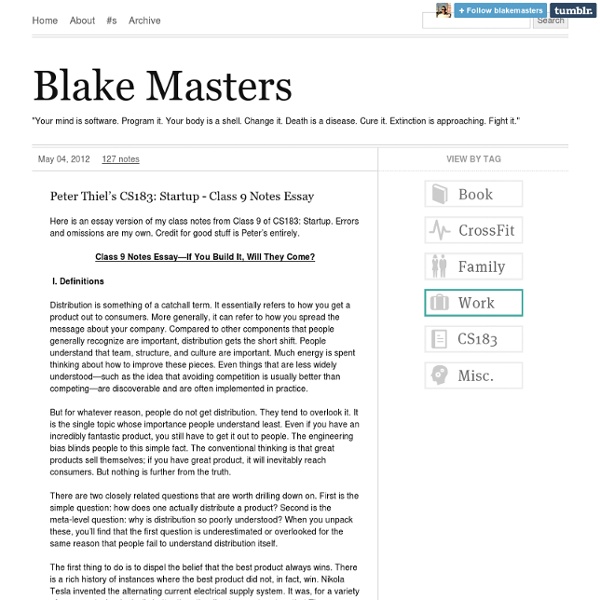 Peter Thiel’s CS183: Startup - Class 9 Notes Essay Here is an essay version of my class notes from Class 9 of CS183: Startup. Errors and omissions are my own. Credit for good stuff is Peter’s entirely. Class 9 Notes Essay—If You Build It, Will They Come? I. Distribution is something of a catchall term. But for whatever reason, people do not get distribution. There are two closely related questions that are worth drilling down on. The first thing to do is to dispel the belief that the best product always wins. II. Before getting more abstract, it’s important to get a quantitative handle on distribution. Customer lifetime value, or CLVAverage revenue per user (per month), or ARPURetention rate (monthly, decay function), or rAverage customer lifetime, which is 1 / (1-r)Cost per customer acquisition, or CPA CLV equals the product of ARPU, gross margin, and average customer lifetime. The basic question is: is CLV greater or less than CPA? III. A. Consider advertising for a moment. B. C. IV. A.

Class 8 Notes Essay Peter Thiel’s CS183: Startup - Class 8 Notes Essay Here is an essay version of my class notes from Class 8 of CS183: Startup. Errors and omissions are mine. Bruce Gibney, partner at Founders Fund, gave the lecture these notes are based on. Credit for good stuff goes to him and Founders Fund. Class 8 Notes Essay—The Pitch I. One of the most important things to remember when thinking about pitching is that there are huge numbers of pitches in the world. Conceptually, pitching sounds easy. But it’s not that easy. Humans are massively cognitively biased in favor of near-term thinking. Before you pitch you should have a clear goal in mind. First, you need to raise the right amount of capital. Second, higher valuations aren’t always in your interest. Your subsidiary goal should be to keep control of your enterprise. II. It’s always important to understand your audience. One of the most important things to understand is that, like all people, VCs are different people at different times of day.

How Growth Hacking Came to Be The buzz on “growth hacking” has spread all across the world. Classes on growth hacking are being taught in Singapore. Companies from San Francisco to London are recruiting growth hackers. The first Growth Hacking Conference popped up a few weeks ago. One explanation is that “growth hacking” is just a catchy way to rebrand marketers, but this begs the question as to why “growth hacking” went viral in the first place. Startups are facing growth challenges that were not apparent a few years ago. Channel instability The creation and destruction of channels is a common occurrence today. Deloitte’s Shift Index, which tracks economic competitiveness, has shown a long-run decline in a firm’s ability to retain market leadership. Firms across industries have struggled to keep pace with this instability, as new channels usually result in market encroachment. Channel saturation Paid advertising channels follow the same pattern. The best product fallacy Product-growth fit Growth hacking as a response

Class 7 Notes Essay Peter Thiel’s CS183: Startup - Class 7 Notes Essay Here is an essay version of my class notes from Class 7 of CS183: Startup. Errors and omissions are mine. Roelof Botha, partner at Sequoia Capital and former CFO of PayPal, and Paul Graham, partner and co-founder of Y Combinator, joined this class as guest speakers. Credit for good stuff goes to them and Peter. Class 7 Notes Essay—Follow the Money I. Many people who start businesses never deal with venture capitalists. VC started in late 1940s. Venture basically works like this: you pool a bunch of money that you get from people called limited partners. Most of the profits go back to LPs as returns on their investment. VC funds last for several years, because it usually takes years for the companies you invest in to grow in value. There are many dimensions to being a good VC. The standard Einstein line on this is that the most powerful force in universe is compound interest. So consider a prototypical successful venture fund. II.

On historical returns and venture capital flavours Story of of the last few years in Venture Fund Land : large institutional investors concentrate money with fewer managers and flagship brands AND / OR find emerging managers. Since VC offerings have generally been undifferentiated, LP’s had little choice when it came to the plethora of venture funds knocking on their doors but to overweight historical returns in their decision making algorithms. Now the market is in radical reduction mode (speaking of the number of ACTIVE venture firms out there) and every venture firm has to answer a simple existential question : why do you even exist ? Is there a valid reason to your existence beyond the funneling of money from A to B and the siphoning of management fees ? So the LP’s have done two things: Concentrate more money with fewer managersRadically concentrate their bets into differentiated offerings You can group these offerings into four broad categories: quartiles Source: great article by Levi Shapiro interview Felda Hardymon

Class 6 Notes Essay Peter Thiel’s CS183: Startup - Class 6 Notes Essay Here is an essay version of my class notes from Class 6 of CS183: Startup. Errors and omissions are my own. Credit for good stuff is Peter’s entirely. This class was kind of a crash course in VC financing. I didn’t include all the examples since you can learn more about VC math elsewhere, e.g. here or here. CS183: Startup—Notes Essay—Thiel’s Law I. Every company is different. Beginnings of things are very important. The insight that foundings are crucial is what is behind the Founders Fund name. The importance of foundings is embedded in companies. Foundings are obviously temporal. There is, of course, a limit to how much you can do with rules. Consider a 2 x 2 matrix. Good, high trust people with low alignment structure is basically anarchy. Sometimes the opposite combination—low trust people and lots of rules—can work too. The low trust, low alignment model is dog-eat-dog sort of world. II. There are different kinds of corporations.

Class 5 Notes Essay Peter Thiel’s CS183: Startup - Class 5 Notes Essay Here is an essay version of my class notes from Class 5 of CS183: Startup. Errors and omissions are mine. Stephen Cohen, co-founder and Executive VP of Palantir Technologies, and Max Levchin of PayPal and Slide fame joined this class as guest speakers. Credit for good stuff goes to them and Peter. I have tried to be accurate. CS183: Startup—Notes Essay—The Mechanics of Mafia I. Everybody knows that company culture is important. Then there are some things that don’t work so well. And then there is what might be called anti-culture, where you really don’t even have a culture at all. Picture a 1-dimensional axis from consultant-nihilism to cultish dogmatism. Good company culture is more nuanced than simple homogeneity or heterogeneity. Similarly, differences qua differences don’t matter much. II. A. Generally speaking, capitalism and competition are better seen as antonyms than as synonyms. Sometimes, though, you need to compete. B. C. III.

Startup Advisor I serve as an advisor to couple startups and get calls asking about advisors -who should be one, how to compensate them, what to expect of them, how to go about finding an advisor etc etc etc. My advisors:First, I had an amazing set of advisors for my first startup Coola, without whom I could not have taken off. They helped me find the enterprenuer in me. I am so thankful for them.I cannot even list all of them here. Three people who helped me from start to finish were Paul English(then GM of Intuit Boston), Piyush Patel (CEO of Cabletron) and Ashish Gupta(VP of Amazon).All of them were enterprenuers who built companies and sold to a large company.All of them were very busy people who cared and found the time for me, who did not intimidate me for my dumb questions and set a high threshold for me to strive for, most important they have set role models for being an enterprenuer and a startup advisor.Who were not my advisors:I had my share of people who were patronizing.