The Tree of Contemplative Practices 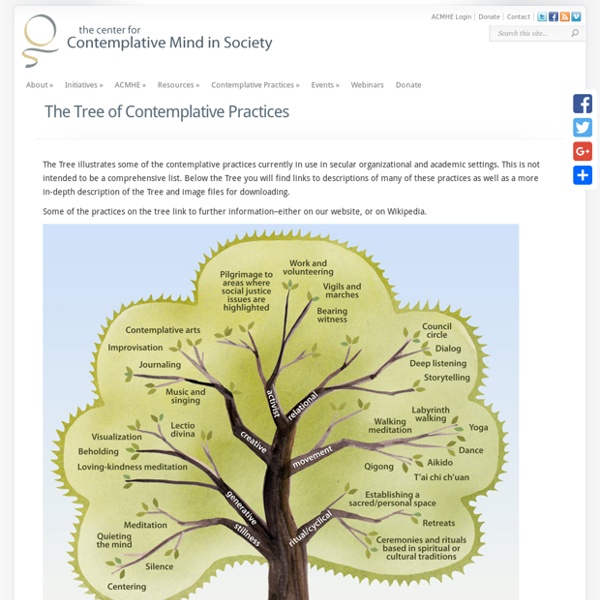 The Tree illustrates some of the contemplative practices currently in use in secular organizational and academic settings. This is not intended to be a comprehensive list. Below the Tree you will find links to descriptions of many of these practices as well as a more in-depth description of the Tree and image files for downloading. Some of the practices on the tree link to further information–either on our website, or on Wikipedia. © The Center for Contemplative Mind in Society Concept & design by Maia Duerr; illustration by Carrie Bergman Understanding the Tree On the Tree of Contemplative Practices, the roots symbolize the two intentions that are the foundation of all contemplative practices. The branches represent different groupings of practices. Because this illustration cannot possibly include all contemplative practices, we offer a free download of a blank Tree that you can customize to include your own practices. Downloading and Reprinting the Tree For printing:

What is Philosophy? An Omnibus of Definitions from Prominent Philosophers by Maria Popova “Philosophy is 99 per cent about critical reflection on anything you care to be interested in.” Last week, we explored how some of history’s greatest minds, including Richard Feynman, Carl Sagan, Albert Einstein, Marie Curie, and Isaac Asimov, defined science. Kant famously considered philosophy the “queen of the sciences” — whether or not that is true, philosophy seems even more elusive than science to define. From Philosophy Bites, the book based on the wonderful podcast of the same name, comes an omnibus of definitions, bound by a most fascinating disclaimer — for, as Nigel Warburton keenly observes in the book’s introduction, “philosophy is an unusual subject in that its practitioners don’t agree what it’s about.” The following definitions are excerpted from the first chapter of the book, which asks a number of prominent contemporary philosophers the seemingly simple yet, as we’ll see, awfully messy question, “What is philosophy?”

Alumni Weekly: Mapping an Argument Reading philosophy is not easy. If you’ve ever slogged through, say, Kant’s Prolegomena to Any Future Metaphysics, you’ll know just how dense it can be. Simon Cullen, a postdoctoral fellow in Princeton’s philosophy department, watched students struggle with Kant and other difficult philosophers two years ago, while leading an undergraduate precept in moral philosophy. Cullen was starting to despair when he recalled the brightly colored argument “maps” he’d seen back home in Melbourne, where they were used to teach critical thinking. Professional Education and Training - Mindfulness - UMass Medical School Oasis Institute began in 2001 as a school for a new generation of health care and other professionals interested in learning, from the inside out, how to integrate mindfulness, mindfulness-based stress reduction (MBSR), and other mindfulness-based approaches into disciplines and communities all over the world. While this is our primary focus, Oasis Institute has a more fundamental objective, which is to foster a direct, experiential understanding that inner experience, intuition, imagination, and non-conceptual awareness are as crucial and valid as objective, evidence-based knowledge to an understanding of the world. Oasis Institute is a rigorous forum for the development and integration of these mutually effective, interdependent approaches to knowing, caring, and serving. BECOMING AN MBSR TEACHER“Cultivating wisdom is the teacher’s path.

The Case For Philosophy In K-12 Classrooms – STIR Journal Learning critical thinking skills helps students become more creative, confident, and engaged. ast year I wrote an opinion piece for the New York Times in which I argued that academic philosophers should do more to make philosophy accessible to the general public. I had come to believe that the kind of critical thinking inherent in doing philosophy was crucial for the health of a pluralistic society. I also felt I owed a debt to my own philosophical education, which has enabled me to have a more nuanced understanding of my experience in the world, and has given me the tools to craft my own meaning in life. "Be the Change" - His Holiness the Dalai Lama at Inverness, Scotland Ethics - Educating the Mind and Heart