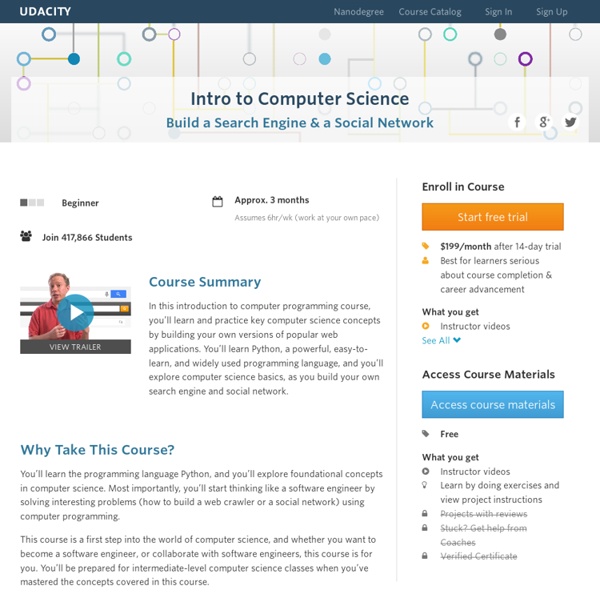 When does the course begin? This class is self paced. You can begin whenever you like and then follow your own pace. It’s a good idea to set goals for yourself to make sure you stick with the course. How long will the course be available? This class will always be available! How do I know if this course is for me? Take a look at the “Class Summary,” “What Should I Know,” and “What Will I Learn” sections above. Can I skip individual videos? Yes! What are the rules on collaboration? Collaboration is a great way to learn. Why are there so many questions? Udacity classes are a little different from traditional courses. What should I do while I’m watching the videos? Learn actively!

How to Code During the month of December, Computer Science Education Week is promoted and is a national movement for students in K-12 schools. Computer Science is an important subject or concept to teach students because it will teach them: about meaningful contextthe learning process break down complex ideas into simpler ideascollaborate with otherskeep calm and move on when frustration sets insparks their creativity and critical thinking skills These are just a few benefits of learning to code. Students today are surrounded by so much technology, that they should have a better understanding of how it really works. Networks, Crowds, and Markets: A Book by David Easley and Jon Kleinberg In recent years there has been a growing public fascination with the complex "connectedness" of modern society. This connectedness is found in many incarnations: in the rapid growth of the Internet and the Web, in the ease with which global communication now takes place, and in the ability of news and information as well as epidemics and financial crises to spread around the world with surprising speed and intensity. These are phenomena that involve networks, incentives, and the aggregate behavior of groups of people; they are based on the links that connect us and the ways in which each of our decisions can have subtle consequences for the outcomes of everyone else.

Scratch 1.4 Download ScratchEd An online community for educators using Scratch, with stories, discussions, and resources, such as the Scratch curriculum guide. Scratch Wiki The Scratch Wiki contains a wide variety of articles by Scratchers for Scratchers, including advanced topics and tutorials. Scratch 2 Offline Editor Download the Scratch 2 offline editor. Coding Is the New Writing for Developing Self-Expression, Communication, Imagination and Solving Hard Problems  Putting coding on a par with the basic 'three Rs' is a trend in education-talk recently (Reading, Writing, Arithmetic, and Lately Coding, NYT, May 10, 2014). However, we know from years of research that its utility goes well beyond the "schoolish three Rs" or "a great job or even instant riches" some day in the future. In my view kids must become coders and digital media creators rather than just information receivers and videogame players, because computational inventiveness, visualization and modeling, toward which coding is one fundamental first step, is essential for success in a world in which digital communication increasingly dominates civil society, business and commerce, science, entertainment, and human interaction around some of our world's most pressing problems --climate change, water scarcity, terrorism and security, global education and health. That was our vision about the power of coding in the 20th century.

Motor cognition The concept of motor cognition grasps the notion that cognition is embodied in action, and that the motor system participates in what is usually considered as mental processing, including those involved in social interaction.[1] The fundamental unit of the motor cognition paradigm is action, defined as the movements produced to satisfy an intention towards a specific motor goal, or in reaction to a meaningful event in the physical and social environments. Motor cognition takes into account the preparation and production of actions, as well as the processes involved in recognizing, predicting, mimicking and understanding the behavior of other people. This paradigm has received a great deal of attention and empirical support in recents years from a variety of research domains including developmental psychology, cognitive neuroscience, and social psychology.

Computer Science Department The University of Texas at Austin Computer Science Summer Camp for Girls First Bytes Summer Camp is a one-week residential camp program for high school girls. It is designed to dispel myths about computer science and intrigue young women with the potential of computing and the excitement of problem solving. Applications for 2014 will be accepted from January 29, 2014 through March 21, 2014. Apply Now! 7 Apps for Teaching Children Coding Skills It's hard to imagine a single career that doesn't have a need for someone who can code. Everything that "just works" has some type of code that makes it run. Coding (a.k.a. programming) is all around us. That's why all the cool kids are coding . . . or should be. Programming is not just the province of pale twenty-somethings in skinny jeans, hunched over three monitors, swigging Red Bull. Not any more!

OpenClassroom Full courses. Short Videos. Free for everyone. Learn the fundamentals of human-computer interaction and design thinking, with an emphasis on mobile web applications. Computer Science Department The University of Texas at Austin Collaborative Workshop for Computer Science Teachers July 9-11, 2014 The First Bytes outreach program at The University of Texas at Austin announces the creation of the First Bytes Collaborative Workshop for Computer Science Teachers. Now in our seventh year, the workshop will be held July 9-11, 2014 at the UT Austin campus. Goals of the Workshop: