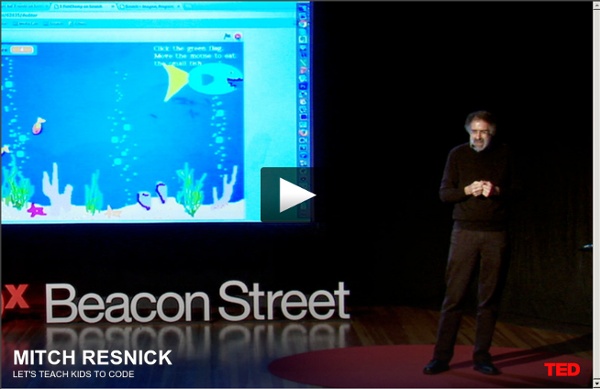 Program or Be Programmed: Douglas Rushkoff, Leland Purvis: Amazon.com Teaching Kids to Code Every era demands--and rewards--different skills. In different times and different places, we have taught our children to grow vegetables, build a house, forge a sword or blow a delicate glass, bake bread, create a soufflé, write a story or shoot hoops. Now we are teaching them to code. We are teaching them to code, however, not so much as an end in itself but because our world has morphed: so many of the things we once did with elements such as fire and iron, or tools such as pencil and paper, are now wrought in code. We are teaching coding to help our kids craft their future. In this collection we share many different perspectives on coding, from a university professor's vantage point (MIT's Mitch Resnick describes why learning to code is like learning to learn) to an entrepreneur's reflections from his cross-country roadtrip to bring coding--and his stuffed dog--to classrooms across the U.S. We should always teach children to bake bread, feed the goats and wield a hammer.

SNAP! (Build Your Own Blocks) How to write a kick-ass proposal for Google Summer of Code « Teo Mrnjavac In a few weeks students can begin submitting their applications for Google Summer of Code 2016. KDE has been accepted as a mentoring organization again this year, and I’ve already been contacted by several students looking to do a Google Summer of Code project with KDE. Prospective Summer of Code students usually have lots of enthusiasm, and they often write great proposals with little or no help, but sometimes these proposals lack key information. I’ve seen my share of good and bad proposals. This post is for students who wish to take part in Google Summer of Code. Google Summer of Code is a kind of like a scholarship program, and a very competitive one: if you get picked, you’re one of just a thousand students in the world (about 1300 last year, 36 of those with KDE) who get to spend their summer hacking on open source software while learning from the very best software craftspeople, and get paid for it too. I used to structure my proposals the following way (worked well 3 times).

Facebook's Bold, Compelling and Scary Engine of Discovery: The Inside Story of Graph Search | Wired Business Beast had a birthday last week. The First Dog of social networking — live-in companion to Mark Zuckerberg and his bride, Priscilla Chan — turned two. The proud owners baked a cake for the Hungarian sheepdog and decided to throw an impromptu party. To date, sorting through your Facebook friends could be a frustrating task. For years now, Facebook watchers have wondered when the company would unleash the potential of its underpowered search bar. In the weeks leading up to the launch, Facebook executives were still trying to come up with a name for the new product. The result is surprisingly compelling. Zuckerberg says that this is in fact a return to the company’s roots. The first of many steps, that is. For example, he thinks he can make it easier to find invitees for a canine birthday party.

After Conquering Consoles, Hard-Core Gaming Shifts To Mobile : All Tech Considered hide captionGears of War: Judgment hit stores on Tuesday. Courtesy Microsoft Studios This generation of video game consoles will be remembered for over-the-top, knock-you-out-of-your-seat extravaganza games like Halo, Call of Duty — and Gears of War, a juggernaut of a game. "Gears of War specifically, to me, is a game that defined the HD generation of gaming," says Phil Spencer, corporate vice president of Microsoft Studios, which publishes and develops games for the Xbox. According to industry analyst Billy Pidgeon, Gears of War may be the swan song for this particular type of gaming experience. "It is one of a kind," he says. Ahead Of The Curve Big changes are coming to the game industry. According to Pidgeon, the console market has peaked. That's a pretty radical thing to say. That said, Gears' maker, Epic Games, is already placing its bets on mobile. Rein may not be modest, but he does have a point. There's Always Time For Video Games

Syrian Cyber-Rebel Wages War, One Hack At A Time hide captionAhmad "Harvester" Heidar is a computer software engineer whose work for the Syrian rebels includes sweeping the hard drives of detained anti-government activists, and trying to develop a robot that will help extract sniper victims in Syria. Turkish officials have given Heidar the green light to develop a prototype of his robot, which he calls Tina. Jodi Hilton for NPR The Internet is a battleground in Syria, a place where President Bashar Assad's regime has mounted a sophisticated surveillance campaign that includes monitoring and arresting activists by tracking their Facebook pages. The Syrian Electronic Army, an arm of the Syrian military, is in charge of the monitoring. But online rebels have mounted a counteroffensive. He says his name is Ahmad Heidar when we meet on the streets of Kilis, a Turkish border town. But he's better known by his online name: Harvester. "It's my red flag, like a bull," he says. Can he beat the Syrian Electronic Army? Choosing Sides And it worked.

Self-Tracking Apps To Help You 'Quantify' Yourself : All Tech Considered hide captionNoah Zandan shows off his Zeo sleep-tracking headband. His other self-tracking devices are on his wrists. Noah and his father, Peter, are both part of the growing "Quantified Self" movement. Elise Hu/NPR Noah Zandan shows off his Zeo sleep-tracking headband. Technology has made it easier than ever to track your activity levels, your sleep cycles, how you spend your time, and more. Interested in giving self-tracking a try? If you're just getting started, the most "mainstream" self-tracking devices are the Fitbit, Jawbone UP, and Nike Fuelband. For heart rate monitoring devices, Garmin and Polar both make options that self-trackers like. Food monitoring apps include MyFitnessPal and MyPlate. If you want to dig a little deeper, these self-tracking devices, apps and systems might teach you something that you don't know about yourself. Talking20: Amino acid testing to monitor what is happening in your body over time; you mail small blood samples and receive digital results.

Brain Workshop - a Dual N-Back game If A Driverless Car Crashes, Who's Liable? : Planet Money hide captionWho's on the hook? Eric Risberg/AP Who's on the hook? Some number of years from now, the technology may exist for cars to drive themselves. But getting the technology right won't be enough. "It's absolutely the case that after the first accident involving an automated vehicle, there will be an automated ambulance chaser following," says Robert Hartwig, president of the Insurance Information Institute. The auto industry is aware of the legal risk. Jeff Dial, an Arizona legislator, introduced a bill last year that would update Arizona law to cover driverless cars. "After I introduced the bill, then suddenly all the insurance companies started approaching me with the questions of the liability," he says. One possible solution comes from the vaccine industry. In the 1980s, the rising threat of liability prompted vaccine manufacturers to pull out of the business. With the threat of liability reduced, more companies started making vaccines again.