A Gateway to Ancient Rome 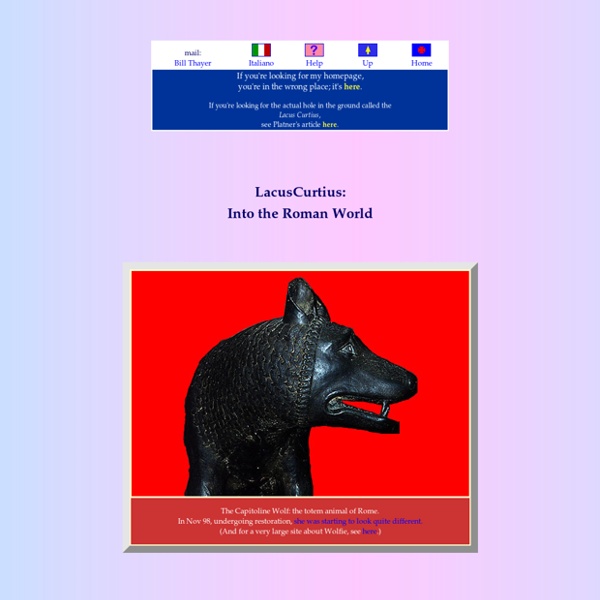 William Smith's Dictionary of Greek and Roman Antiquities, an encyclopedic work containing a lot of good basic information (and references to primary sources), was published in 1875: it is thus an educational resource in the public domain. I've been putting a large selection of articles from it online, often as background material for other webpages. It is illustrated with its own woodcuts and some additional photographs of my own. Chariots and carriages, the theatre, circus and amphitheatre, roads, bridges, aqueducts, obelisks, timepieces, organs, hair curlers; marriage & children, slaves, dance, salt mines, and an awful lot more; among which special sections on law, religion, warfare, daily life, and clothing. Related:  Latin

Monumentum Ancyranum The Text on LacusCurtius As almost always, I retyped the text by hand rather than scanning it — not only to minimize errors prior to proofreading, but as an opportunity for me to become intimately familiar with the work, an exercise which I heartily recommend: Qui scribit, bis legit. (Well-meaning attempts to get me to scan text, if successful, would merely turn me into some kind of machine: gambit declined.) This transcription has been minutely proofread. Copyright The texts and English translation are those of Frederick W. Both chapters (large numbers) and lines (small numbers) mark local links, according to a consistent scheme, for which you should see the sourcecode; you can therefore link directly to any passage. Apparatus The Loeb edition provides, and I have reproduced, a detailed, possibly comprehensive apparatus criticus to the Latin text.

Institut für Alte Sprachen - Klassische Philologie: Startseite Ammian (Ammianus Marcellinus) The Text on LacusCurtius The English translation is by J. C. Rolfe, printed in the Loeb Classical Library edition, 1939‑1950: I followed my usual method and retyped it rather than scanning it; not only to minimize errors prior to proofreading, but as an opportunity for me to become intimately familiar with the work, an exercise which I heartily recommend. Except for that one passage, however, as of writing (early February 2008), the Latin text is still that of the unspecified edition on Forum Romanum, only a few errors being corrected, although I've already added most of the local links for chapters and sections — and all the snippets of Greek, uniformly garbled in the Forum Romanum transcription, have been restored. Further details on the technical aspects of the site layout follow the Table of Contents. The Author and the Text: Background Assessments of Rolfe's Translation Ask someone who had nothing to do with the book, however, and you can get some pretty stiff answers. J.

ReadAnyBook.com – online reading for free. CRI/Voice, Institute - The Voice, Main Menu Latin Resources on the Internet - Hiberna Caroli Raetici Below I present a few of the most important Latin resources freely available on the Internet. Beware: Don't be fooled by the fact that I am not providing hundreds of links. I do not believe in swamping unwary visitors with links to obscure sites (which then often turn out to be dead ones). These links provide information and resources both for beginners, intermediate and advanced learners. Beginners' Learning Resources Textkit.com: This web-site is the ideal place for anyone needing help in learning Latin. Using Latin Vicipaedia Latina: This is the Latin version of Wikipedia. Latin Texts Online edonelly.com: This list of links to freely downloadable Latin books (text books, reading material) is simply superb. News in Latin Ephemeris: This excellent newspaper-style site has been providing news in Latin since 2004. Resources about Roman history, monuments, etc. Lacus Curtius: This is a web-site maintained by Bill Thayer and featuring several Latin texts. Spoken Latin Kulturzeit extra: O tempora!