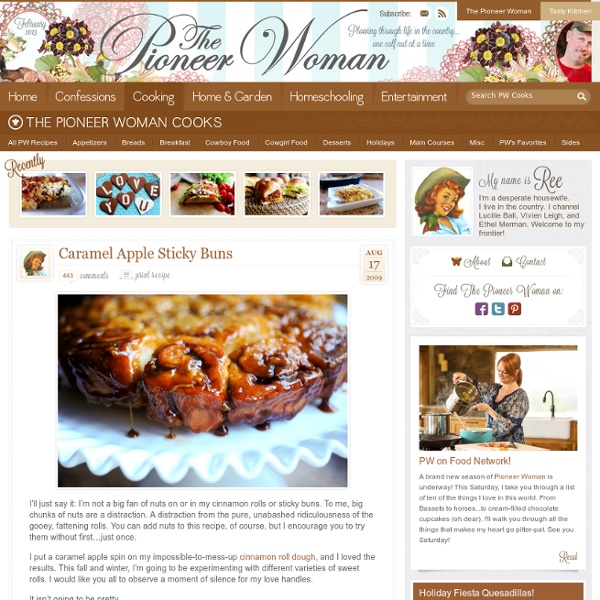 I’ll just say it: I’m not a big fan of nuts on or in my cinnamon rolls or sticky buns. To me, big chunks of nuts are a distraction. A distraction from the pure, unabashed ridiculousness of the gooey, fattening rolls. You can add nuts to this recipe, of course, but I encourage you to try them without first…just once. I put a caramel apple spin on my impossible-to-mess-up cinnamon roll dough, and I loved the results. It isn’t going to be pretty. I went ahead and made a full batch of my cinnamon roll dough, but for the recipe below I halved it. We’ll start with the caramel topping first: melt 1 stick of butter in a heavy skillet over low heat. Add 1 1/2 cups packed brown sugar. Next, add 1 to 2 tablespoons dark corn syrup… And 2 tablespoons heavy cream. I also added a little Calvados—an apple-flavored brandy—but I didn’t take a photo because I felt naughty. Let this melt and start to bubble up, but don’t let it cook very long. Just roll out the dough pretty thin… Then pour on the butter… Enjoy! Related:  Caramel Concoctions

Cheeky Kitchen » How To Make Butterflake Rolls if You’re Not Martha Stewart Try as I might, I can’t make things perfect. I can make one cupcake in a batch look pretty dang awesome. From time to time my junk drawer has all of the pens in the same slot. I’ve attempted gardening until my dirt is a soft mixture of home-recycled compost, but somewhere between good intentions and real life, I discover that I don’t have enough patience to hand-craft pansies from gumpaste. Apparently, I don’t have what it takes to make photo-worthy Butterflake Rolls, either. No worries. The floor will get messy. Toss a bit of butter into your muffin tins. Mix together your basic ingredients until a soft, luscious dough forms. The real trick to making Butterflake Rolls is layer after layer after layer of butter kneaded into layer after layer after layer of dough. Bound to get ugly before it gets beautiful. Oh, who am I kidding. Flaky, buttery, and ridiculously delicious (if ever so slightly messy and kind of ugly-ish), these butterflake rolls are simple to make and tremendously tasty.

Cinnamon Toast Rolls The USDA released its new food pyramid the other day (which is actually a plate now instead of a pyramid), and I am sorely disappointed to report that cinnamon rolls did not appear anywhere on that plate. I think by now most of us know what should be on our dinner plate in terms of healthy, well-rounded nutrient-laden meals, but it is my considered opinion that our breakfast plate should include cinnamon rolls now and then. And not just any cinnamon roll, mind you, but how ‘bout a homemade cinnamon roll hybrid that is a cross between a cinnamon roll and cinnamon toast, is super easy to make and gosh darn delicious. In honor of their ancestry, I call these little gems cinnamon toast rolls, and here’s all you need to make them… Yep. Trim the crusts off of the bread Roll the bread really flat Brush both sides of the bread with butter Sprinkle with cinnamon sugar Roll in any fashion you like (I’ve also folded them into little triangles) Cinnamon Toast Rolls Click here for a printable recipe

Dulce de Leche Imagine a creamy, rich, brown caramel made from the simplest of ingredients — milk and sugar — and involving little more than a pot of boiling water and a couple hours. Hard to believe, but the best way to make dulce de leche is also the easiest way. And tell me you’re not salivating as you eye the caramel I’ve got sitting in a jar in my fridge. This stuff is to die for, people. Ingredients: 1 can sweetened condensed milk. Peel the label of the can of sweetened condensed milk. When 2 hours (or your desired cooking time) have elapsed, turn off the heat and leave the can in the water for at least half an hour, to cool slightly. After 30-45 minutes, remove the can with tongs; if it’s not too hot to touch, you can open it with a can opener. Email Print

The One That Made Me Waver Is it summer yet? It's hard to tell with the odd weather we've been getting so far. It's been a rather wet one this year, with lower than average temperatures. But cooler temperatures this week and an itch to go back into the kitchen produced cookies this week. White Chocolate Macadamia Nut CookiesMakes about 3 dozen 2 cups all-purpose flour1 teaspoon baking soda1/2 teaspoon salt3/4 cup butter, at room temperature1 cup packed brown sugar1/4 cup white sugar1 egg1 egg yolk1 tablespoon vanilla extract1 cup macadamia nuts, roughly chopped1 1/4 cups white chocolate chips Preheat the oven to 325°F. In a medium bowl, beat together butter and sugars with a mixer until creamy, about 2 minutes. Gradually add the flour mixture and mix on slow speed until just incorporated. Bake for 12-14 minutes or until the edges look golden brown.

Homemade Tortillas Making soft delicious tortillas at home is surprisingly easy. In fact, once I started making my own suddenly all our dinners and lunches were rolled up in fresh tortillas. The dough is made from flour, shortening, water, and salt. I had all the ingredients on hand but the shortening.. which ended up only costing two dollars and has lasted through many many batches of tortillas. Considering how cheap the ingredients are and how delicious they taste it just doesn't make sense to pay for the much more expensive packaged ones. To make the dough you first work the shortening into the flour. Next some hot tap water and salt is stirred in with a fork until a dough forms. To make sure that the tortillas are the same size the easiest thing to do is roll the dough into a log and then cut it into equal pieces. Since the dough is a medium-stiff consistency it might be easier just to squeeze it into a log shape rather than roll it. Each ball gets rolled out into the seven inch diameter circle. 1. 2.

Jamaican Banana Fritters - ThatsSoYummy.com There’s a thing in my house that when you have ripe ol bananas either you make banana bread or banana fritters. These delicious tasty treats can be eaten morning, noon, or night, as a snack or as dessert. These fritters are so easy to make and will satisfy any craving you may have. So if you have a few of these bananas lying around your hose… don’t toss them, put them to GREAT use! Enjoy! Peel and mash the ripe bananas. Beat egg, sugar, vanilla, cinnamon, and nutmeg. Next, blend egg mixture with mashed bananas. Make sure it is all incorporated. Then sift flour and baking powder into the banana/egg mixture. Mix it all together. If the batter seems to be too thick add a little milk… I added about 1/4 cup to 1/2 cup of milk. Add oil to a frying pan and place on medium high heat. Drop spoonfuls of the banana fritter batter into the hot oiled frying pan. Flip when you see the edges starting to get brown and golden. Lastly, combine cinnamon and sugar together to create your cinnamon sugar. Ingredients

apple mosaic tart with salted caramel My husband likes to joke that every other comment on this site in the month of October is, “Help! I went apple picking and I brought home 20 pounds of apples and I don’t know how to use them up!” It’s not true, of course; it’s every five or six comments. I am kidding, mostly. Are you taking submissions for your new favorite dead simple fall dessert? This tart is, in essence, a French apple tart, a simple affair involving puffed pastry, thin slices of apples fanned this way and that before they are dotted with butter, sprinkled with sugar and baked in the oven until they solder together into an puddled-apple-butter-caramel fusion that is entirely greater than the sum of its parts. The result is a mosaic of fall apple bliss. Two years ago: Cauiliflower and Parmesan CakeThree years ago: Apple Cider DoughnutsFour years ago: Meatballs and Spaghetti and Molly’s Apple Tarte TatinFive years ago: Pumpkin Bread PuddingSix years ago: Wild Mushroom Galette Apple Mosaic Tart with Salted Caramel

Gâteau de crêpes on the web log « I'd rather be in France. April 13th, 2011 | Rachel I’ve started noticing a few side effects of web-logging (sounds more sophisticated than blogging). For starters, I’ve become one of those people who talks about their blog. I’ve also started talking to myself… even more than usual. Unfortunately, these helpful voices cease as soon as I turn on my laptop… … like right now. Ahem. Maybe I should just stick to showing you photos of my food. Tonight I created a savory gâteau de crêpes. Everything you need for perfect crêpes According to Julia, the easiest way to make a smooth crêpe batter is to throw it all in a blender. Set-up for making crêpes The recipe calls for approximately 25 6.5″ crêpes The filling begins with a light cheese sauce, part of which is mixed with sauteed ham or blanched spinach This recipe was definitely a labor of love. Behold, the gâteau de crêpes. Twenty five layers of deliciousness The cake looks small (its only 6.5″ in diameter), but it is so rich that the servings should be pretty small.