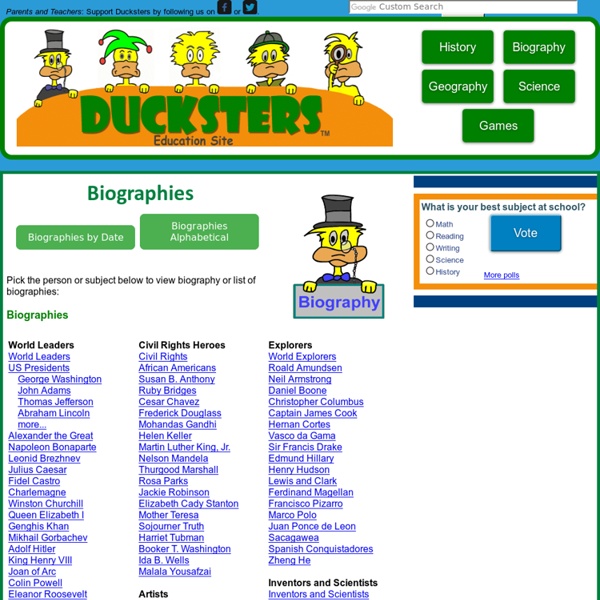 Thanksgiving Wordsearch, Crossword Puzzle, and More What Is Thanksgiving? Thanksgiving is, as the name suggests, a holiday for giving thanks. It is celebrated on the fourth Thursday in November each year in the United States. Kate Middleton - Biography on Bio. Kate Middleton was a student at the University of St Andrews in Fife, Scotland, where she graduated in 2005 with a bachelor's degree in the History of Art. In 2001, while in her second year at the University of St Andrews, Middleton met the future king. Since 2003, she and the prince have been in an on-again-off-again relationship that has been the subject of intense media scrutiny. She was born on 9 January 1982, in Berkshire, England, to pilot Michael and flight attendant Carole Middleton. In 1987, the Middletons founded their own party goods company, which helped to make them millionaires.

Squanto Facts for Kids Squanto (or Tisquantum, 1580? – November 1622) was a Native American who helped the Pilgrims survive in the New World. He learned to speak English and was hired as a guide and interpreter. He taught the Pilgrims to plant corn. David Beckham - Biography on Bio. David Beckham was born in Leytonstone to parents Ted, a kitchen fitter, and Sandra, a hairdresser. Beckham's parents were fanatical Manchester United supporters who frequently travelled to Old Trafford from London to attend the club's home matches, so he naturally inherited their love of the team and chose football as his main sporting passion. His love of football meant that his schooling took second place.

Harriet Tubman Biography “I was the conductor of the Underground Railroad for eight years, and I can say what most conductors can't say; I never ran my train off the track and I never lost a passenger.” “I had reasoned this out in my mind, there was one of two things I had a right to, liberty or death; if I could not have one, I would have the other.” “I grew up like a neglected weed – ignorant of liberty, having no experience of it.”

News, Articles, Photos & More Travel like a Historian in Massachusetts The state may be home to America's quirkiest historic mansion. Read More Why the U.S. Made Marijuana Illegal Online spelling and vocabulary program for kids Our online spelling and vocabulary program will improve your child’s language skills - one word at a time K5 Spelling’s ‘adaptive test-study’ approach, automatic word generation, optimized visual interface, 150,000 word database and continuous tracking of each student's spelling and misspellings is far beyond your typical online spelling program. Traditional spelling quizzes: lots of effort, limited impact Traditionally, students are given a list of spelling words to study, then tested and scored. Students learn how to "cram" words into short term memory. No follow-up takes place on the words the student misspelled.