After Effects region of interest 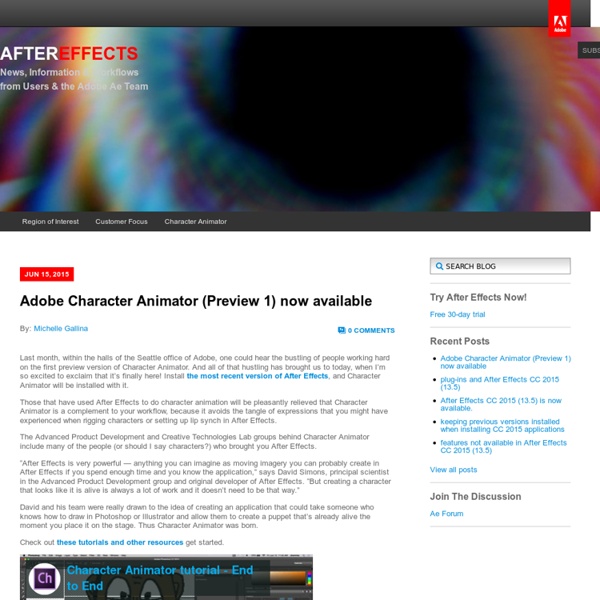 After Effects | Mylenium's Error Code Database Message text: After Effects error: CT bad param: invalid glyphID Message interpretation: The program generated an ID for an (Unicode) glyph that doesn’t exist. Possible causes: This actually pretty clearly points to a bug – the program or one of the plug-ins should not even be able to calculate a glyph ID that isn’t defined in the Unicode/ OpenType specifications. Resolution or workaround: Always keep your software updated and use the latest certified compatible versions of third-party plug-ins. Like this: Like Loading... Message text After Effects error: CT generic: not ASCII Text rendering failed because the character was not in the ASCII range. Just another weird font error. The only advise here is to check the system’s language settings and adjust them. After Effects error: invalid table address A font did not return a valid character. Similar to many other font errors this one remains obscure in that the specific cause never became clear. The program cannot access the font cache. Fehlermeldung:

Realistic Bounce and Overshoot Goldfish don't bounce. —Bart Simpson Sometimes you may want to embellish your animated motions with a bit of physical realism. Bounce vs. In both bounce and overshoot scenarios, you are dealing with decaying amplitude. This is the waveform of an exponentially decaying sine wave used to simulate harmonic resonance. Bounce is a completely different beast. This waveform is generated by a bounce simulation expression. You might be tempted to simulate this bounce behavior by taking the absolute value of the oscillating sine wave (using the JavaScript Math.abs() function) and linking the frequency variable to a slider which you would keyframe to speed up. Overshoot in Detail Take a look at the basic expression for an exponentially decaying sine wave: amp = 80; freq = 1; decay = 1; t = time - inPoint; amp*Math.sin(t*freq*Math.PI*2)/Math.exp(t*decay); As it sits, this expression will trigger a decaying sine wave oscillation at the layer's In Point. There are three things going on in the last line.

Add Ons - Curva Script Curva is AE script to create a smooth animations of growth a paths based on Bezier algorithms. You just select the last two vertices on the Path object in a Shape layer and then the script does everything for you. Perfect for animating the appearance of letters, floral shapes and other such vector objects. My job motion-designer is forcing me to write a scripts. Curva has two separate versions of the script.Script UI Panel version and Regular script to launch the main window at once. Features Animation appearance of shapes with just a few clicks. Screenshots Great song by migueljl used in promo: Pepper Swing 10 Amazing Trapcode Particular Tutorials Learn how to create amazing effects in these 10 Trapcode Particular video tutorials. Trapcode Particular is one of our favorite plug-ins for After Effects. Unlike the native particle generators in AE, Particular gives users much more control over the particles created. With a little creativity you can use Trapcode Particular to produce some pretty amazing effects. If you don’t have Trapcode Particular you can download a free trial from Red Giant’s website. 1. Creating realistic water is a huge challenge for VFX artists, but in this short tutorial Dino Muhic shares his workflow for creating a realistic water effect in After Effects using Particular. 2. In this tutorial VinhSon Nguyen shows us how using null objects and a few emitter keyframes can produce an incredible galaxy nebula effect. 3. Using a few native effects and Trapcode Particular you can create this really awesome burning fire logo in After Effects. 4. 5. 6. 7. 8. 9. 10.