Making sense of too much data 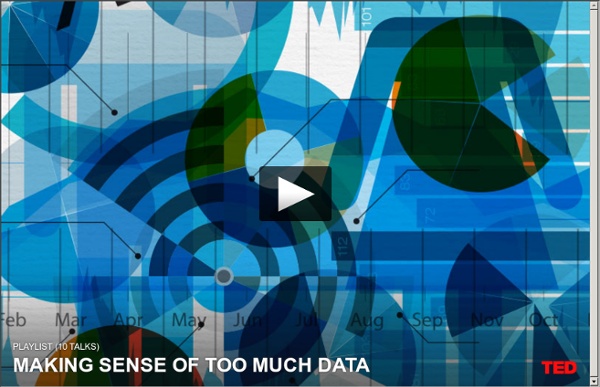 Installing IPython — IPython There are multiple ways of installing IPython, and our official documentation contains detailed instructions for manual installs from source, targeted at advanced users and developers. For new users who want to get up and running with minimal effort, we suggest you follow the instructions on this page, which provide a setup based on Python 2.7. This includes all the dependencies to run the notebook and optionally the basic libraries for scientific computing and data analysis. Playlist: 6 beautiful talks by data artists In the information age we have access to more data and knowledge than at any previous point in human history. But more accessible data doesn’t necessarily mean more processable data — tax returns, court cases and newspaper archives may be available to the public, but they are often hard to interpret and understand. Data artists process this mess of information for us and break it down into comprehensible pieces, often enhancing it by placing it in deeper contexts and by finding surprising patterns. The designers and artists below are on the cutting edge of this work, experimenting with new technologies to take numbers and facts and turn them into beautiful multimedia works of art and knowledge.

NSA files decoded: Edward Snowden's surveillance revelations explained Two factors opened the way for the rapid expansion of surveillance over the past decade: the fear of terrorism created by the 9/11 attacks and the digital revolution that led to an explosion in cell phone and internet use. But along with these technologies came an extension in the NSA’s reach few in the early 1990s could have imagined. Details that in the past might have remained private were suddenly there for the taking. Chris Soghoian Principal technologist, ACLU NSA is helped by the fact that much of the world’s communications traffic passes through the US or its close ally the UK – what the agencies refer to as “home-field advantage”.

10 Tools for Creating Infographics and Visualizations The author's posts are entirely his or her own (excluding the unlikely event of hypnosis) and may not always reflect the views of Moz. Hello there! I'm Miranda Rensch, Product Manager at SEOmoz and lover of visual communication. Communicating visually is one of the most effective ways to explain complex concepts and relationships, and can be a great way to explain your services/products and create valuable site content. I often use diagrams and whiteboarding in order to communicate new features and concepts internally with my team. 10 Rules For Writing Multiple Choice Questions Sharebar This is a back-to-basics article about the undervalued and little-discussed multiple choice question. It’s not as exciting as discussing 3D virtual learning environments, but it might be just as important. If you need to use tests, then you want to reduce the errors that occur from poorly written items. The rules covered here make tests more accurate, so the questions are interpreted as intended and the answer options are clear and without hints. Just in case you’re not familiar with multiple choice terminology, it’s explained in the visual below.

CI: What is Collective Intelligence? Intelligence is not just something that happens inside individual minds. It also arises within groups of individuals and this phenomenon can be quite powerful. For a number of months Imagination for People has been working on software that will facilitate the creation of what is called ‘collective intelligence.’ In preparation for the launch of this software, we thought we would take some time to introduce the I4P community to collective intelligence (CI) and show off some of its benefits. 5 Future Technology Myths" The flying car has been prophesied for decades. It's one of the holy grails of the futuristic, utopian society, where everyone gets to zip around through the air and land easily, quietly and safely wherever he or she wants. You've probably seen videos of flying-car prototypes, taking off from the ground, hovering and possibly crashing. But the first "autoplane" was actually unveiled in 1917, and many similar efforts have followed.