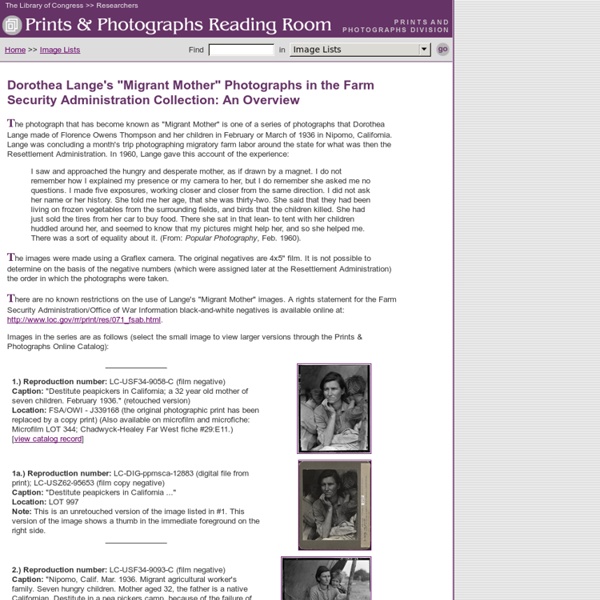 The photograph that has become known as "Migrant Mother" is one of a series of photographs that Dorothea Lange made of Florence Owens Thompson and her children in February or March of 1936 in Nipomo, California. Lange was concluding a month's trip photographing migratory farm labor around the state for what was then the Resettlement Administration. In 1960, Lange gave this account of the experience: I saw and approached the hungry and desperate mother, as if drawn by a magnet. I do not remember how I explained my presence or my camera to her, but I do remember she asked me no questions. I made five exposures, working closer and closer from the same direction. The images were made using a Graflex camera. There are no known restrictions on the use of Lange's "Migrant Mother" images. Images in the series are as follows (select the small image to view larger versions through the Prints & Photographs Online Catalog): Contemporary Publications in Which "Migrant Mother" Was Featured: -----. Related:  Arts visuels

Farm Security Administration/Office of War Information Black-and-White Negatives - About this Collection - Prints & Photographs Online Catalog Most images are digitized | All jpegs/tiffs display outside Library of Congress | View All The photographs in the Farm Security Administration/Office of War Information Photograph Collection form an extensive pictorial record of American life between 1935 and 1944. This U.S. government photography project was headed for most of its existence by Roy E. In total, the black-and-white portion of the collection consists of about 175,000 black-and-white film negatives, encompassing both negatives that were printed for FSA-OWI use and those that were not printed at the time. For a video overview of the collection, see "Documenting America, 1935-1943: The Farm Security Administration/Office of War Information Photo Collection." Research Tips Unprinted negatives: You can search for "Untitled" to see images that did not come with a caption card bearing a title and are presumed not to have been printed.

Exploring Contexts: Migrant Mother:Prints and Photographs Division Exploring Contexts: Migrant Mother As suggested in the Researching Images section, awareness of the circumstances surrounding the creation of any given image enriches our interpretation of it. Exploring, however briefly, the multiple contexts surrounding a single, well-known picture vividly illustrates the point that many factors shape the making and meaning of images. The photograph popularly known as “Migrant Mother” has become an icon of the Great Depression. The compelling image of a mother and her children is actually one of a series of photographs that Dorothea Lange made in February or March of 1936 in Nipomo, California. Lange made the photographs toward the end of a month's trip photographing migratory farm labor for what was then the Resettlement Administration, later to become the Farm Security Administration. I saw and approached the hungry and desperate mother, as if drawn by a magnet. [Top]

Dorothea Lange - California Museum Dorothea Lange’s photographs have etched the faces of the poor and forgotten into the American memory. Her compassionate images of disadvantaged Native Americans, displaced families of the Great Depression, and interned Japanese Americans during World War II helped develop documentary photography as we know it today. Born in Hoboken, New Jersey, in 1895, she contracted polio at age seven and was left with a lifelong limp. After studying photography as a young woman in New York City, in 1918 she moved to California and opened her own portrait studio in San Francisco. In 1933, Lange and her husband, Paul Taylor, documented the grim exodus of farm families escaping the dust bowl, and her powerful images persuaded many of the need for government programs to aid the dispossessed. Lange died in 1965 but her passion for people and the art of photography left us with era-defining images of 20th century America.

FDR’s Commonwealth Club Address My friends: I count it a privilege to be invited to address the Commonwealth Club. It has stood in the life of this city and state, and it is perhaps accurate to add, the nation, as a group of citizen leaders interested in fundamental problems of government, and chiefly concerned with achievement of progress in government through non-partisan means. The privilege of addressing you, therefore, in the heat of a political campaign, is great. I want to respond to your courtesy in terms consistent with your policy. I want to speak not of politics but of government. I do want to give you, however, a recollection of a long life spent for a large part in public office. The issue of government has always been whether individual men and women will have to serve some system of government of economics, or whether a system of government and economics exists to serve individual men and women. The final word belongs to no man; yet we can still believe in change and in progress. But Mr.

History in Photos: Dorothea Lange - Japanese Internment A farm mother awaits evacuation bus. Centerville, California, 1942 A farm youngster pictured two days before evacuation of persons of Japanese ancestry from this Santa Clara County farming community. 1942 A mother and daughter, Issei and Nisei, who have been living in this Assembly Center for one month, are seen at the door of their home in the barracks. San Bruno, California, 1942 A young member of an evacuee family awaiting evacuation bus. Hayward, California, 1942 An elementary school with voluntary attendance has been established with volunteer evacuee teachers, most of whom are college graduates. Arranging flowers for altar on last day of services at Japanese Independent Congregational Church, prior to evacuation. Awaiting evacuation bus. Baseball is the most popular recreation at this War Relocation Authority center with 80 teams having been formed throughout the Center. College students of Japanese ancestry who have been evacuated from Sacramento to the Assembly Center. 1942

world press photo 2013 image alteration controversy feb 20, 2013 world press photo 2013 image alteration controversy world press photo 2013 winning image by swedish photographer paul hansenimage © paul hansen the 2013 world press picture of the year, taken by the swedish photographer paul hansen shows the funeral procession of two palestinian children tragically killed by a missile attack on their gaza home in november 2012. the entry, awarded the first prize in the news category, is currently at the centre of a debate surrounding the practice of image manipulation in documentary photography. when photography was first invented, its overwhelming power came from the fact that it recorded ‘moments’ or ‘nature’ more realistically than any other art form had ever done before. photography could just easily become a manipulated discipline – visual fiction! véronique de viguerie, a getty photojournalist and member of the world press 2013 jury says : read more on the issue here and here in french, and here in italian. lara mikocki I designboom

Untitled Document Understanding capitalism with different approaches: Smith, Keynes, and Marx Right<--------- liberal------>left Adam Smith Keynes Marx Adam Smith (1723-1790): As new thoughts or innovations constantly challenged existing authorities, old institutions faced a decline and threats of a new system within society. The free market is the market that solely decides wages and prices and does not contain government intervention (“Free Market.”). However, Adam Smith did not consider a class gap between capitalists who hold a lot of power or employers who hold little power. John Keynes (1883-1946): Keynes came along during the Great Depression and pointed out the cause of the economic downfall. At this point, the readers should be aware of two different economic theories under the same system, capitalism. Karl Marx: (1818-1883): While observing capitalism carefully, Marx came to the conclusion that capitalism has to expand in order for it not to collapse. Back to the top

Looking at Dorothea Lange’s Migrant Mother Something appears to have been mixed up here, since the photograph above is not the well-known Migrant Mother photograph by Dorothea Lange. However, it is, unmistakably, the mother from that photograph. What I’m going to do in the following is to try to investigate how portraiture works (at least in part) by using a set of Lange’s photographs, namely the Migrant Mother ones that can be found in the Library of Congress. (For this article, I’m using the scans from the LOC scans, hence the frames and the writing around the image) There are all kinds of reasons for me to pick these images, the most important ones being that everybody knows the most well-known picture, while only few people have ever seen the other ones. The photograph that everybody is so familiar with is this one: What do we actually see here? Back to the photograph, while the mother’s pose seems fairly natural, the two larger children’s has always struck me as a bit artificial. Back then to the picture from the very top: