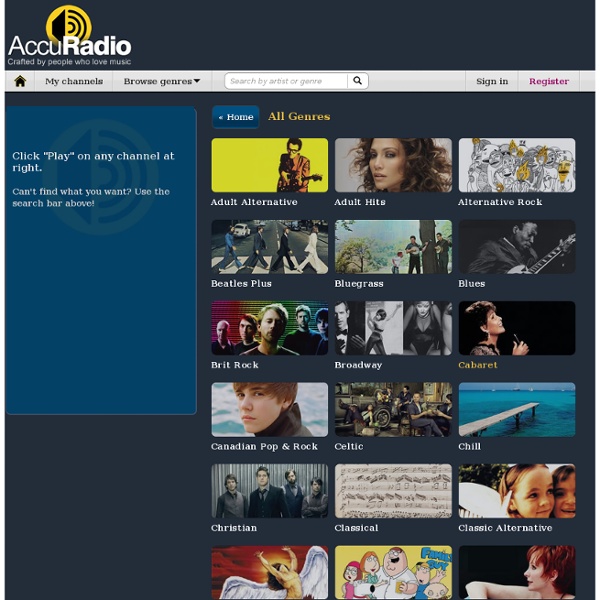 DESIGN SQUAD . String Thing Come play again later! Come play again tomorrow! Otomata 16 Jul 2011 Click on the grid below to add cells, click on cells to change their direction, and press play to listen to your music. Update: Click here to get Otomata for your iPhone / iPod / iPad! Official facebook page: I write for myself and I'll say anything I damn well please Transcripts follow. (Source: Dexter; Image above, via NME.) Transcript December 2, 1996 Green Day P.O. Box 710 Berkeley, Ca 94701-0710Re: InsomniacTo whom it may concern:I am a parent, and I am very disturbed by the cassette tape my 8 year old son was listening to. His 60 year old grandmother bought it for him as a birthday present and was totally unaware of its explicit content. Alter Bridge

Stereomood - turn your mood into music - free playlist for every mood in your life The best workout songs and playlists for your running pace - jog.fm Apple Pie Egg Rolls – Miss in the Kitchen Apple Pie Egg Rolls I saw one of the Food Network stars making apple chimichangas and thought I had to have some for myself. I bought flour tortillas and apples, and then I used the flour tortillas for tacos. Still wanting some kind of fried apple pie dessert I used the egg roll wrappers I had in place of the flour tortillas. I know, I know frying dessert just makes it more sinful, but these are totally delicious. Musicovery Dubstep Music: Here to remind you why it's cool to have ears Classical MIDI and MP3 Files at the Classical MIDI Connection