A European Citizen Initiative to give the Earth Rights 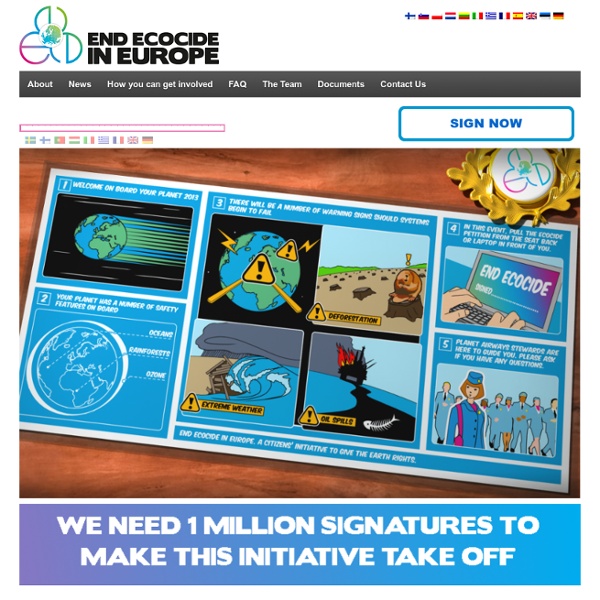 Rosia Montana, Rumania: foreign companies are planning to mine gold, silver and other resources by means of Open Pit Mining. Within the next 10 years 130,000 tons cyanide are planned to be used to extract the precious metals, leaving large amounts of highly toxic soil and water behind. Fracking pollutes ground water, soil and air and threatens human health for the sake of profit and fossil fuel extraction which when burned even aggravate climate change. Is this fair? The situation of the seas is severe: Estimates indicate that almost 50 percent of the fish population in European waters is overfished, constituting a severe threat to marine ecosystems and our food security Even 25 years later, the nuclear accident at Chernobyl still affects the life of young and old.

Only 12 days left for the ECI to End Ecocide in Europe Dear supporters, We invite you to read more about updates on our latest newsletter, in English, French, German, Spanish, Italian, Bulgarian and Portuguese. There you can read about the Ecocide case of Talvivaara Mine in Finland (as seen in the attached picture), a new research published by our devoted research team, the nominee short videos for our video competition and much more.. Also if you have a twitter account we would appreciate your help in our "Twitter Brains" day tomorrow, January 11th. And in case you haven't please sign and spread the word about the European and International initiatives - If you are a European Citizen we urge you to sign the European Citizens' Initiative (ECI) to propose a new law to make Ecocide a crime - click here

the environmentalists: Home known issues, new qualities Pollution, the destruction of habitats, even the extinction of whole species are no new phenomena. What is new, is the reach and the permanence of the changes, humans inflict on the environment today. Read more... known issues, new options May News from End Ecocide Europe to elect a new Parliament - Will it be more ECO? In one week, the citizens of the European Union will elect a new European Parliament. We have asked candidates from many countries whether they support our initiative. By now, over 30 candidates from many countries have explicitly expressed their support for the idea of ending ecocide. So go figure and maybe choose to elect one of them! If you want to read what they had to say about our initiative, go ahead and visit our blog with weekly news at least ;)

Standing up for Nature Most unfairly ignored UK bird? Photo: Chris Cant via wikimedia commons What is the UK’s most unfairly ignored bird? Earth Blog: EARTH MEANDERS: Ecocide Is Not Development; Love and Ecology Are the Answer Earth's ecosystems are collapsing, human and all species' habitats are being lost, and our one shared biosphere is failing and dying. Love of other peoples and species and of nature, truth, justice, and equity are the only lasting basis for global ecological sustainability. “It is no measure of health to be well adjusted to a profoundly sick society.” – Krishnamurti “Truth matters. The Energy Report A fully sustainable and renewable global energy system is possible by 2050 Published: 03/02/2011 The Energy Report presents a possible transition to a global, sustainable energy system. The two-part report contains a detailed analysis and scenario created by Ecofys, and a narrative by WWF. It addresses the fundamental question: “Is a fully sustainable global energy system possible by 2050?”

End Ecocide Conference: the launch of worldwide new campaign for International Justice for the Earth - End Ecocide on Earth On October the 13th, the End Ecocide initiative gathered legal experts, scientists, NGOs, politics and citizens in the European Economic and Social Committee (EESC) in Brussels to talk about the ecocide concept and ways to implement it at national, european and international levels. Here is the summary of our day! Dr. Damien Short – London University Professor at University of London, leads Ecocide research project.

justice5continents Presenters and testimonies on oil extraction: Godwin Ojo, (Environmental Rights Action (ERA)/Friends of the Earth Nigeria, Niger Delta Shell) Eriel Deranger, (Athabascan Chippewyan - Oil Sands Canada) Valerie Cabanes (End Ecocide on Earth, France) - Recognizing ecocide in international criminal law Carlos Larrea (Andina Simón Bolivar University, Ecuador) Esperanza Martinez (Acción Ecologica, Oilwatch - Keep Oil Underground, Acuador) Scientists urge the U.N. to make environmental destruction a war crime War (huh!) what is it good for? Certainly not the environment. From the U.S. dropping the herbicide agent orange on jungles in Vietnam to Saddam Hussein’s damming marshes in Iraq, human conflict has often involved the intentional infliction of wounds on both ecosystems and populations. And just as certain acts of violence against people are considered intolerable, a group of researchers has asked that a set of harms against the environment be designated as “war crimes.”