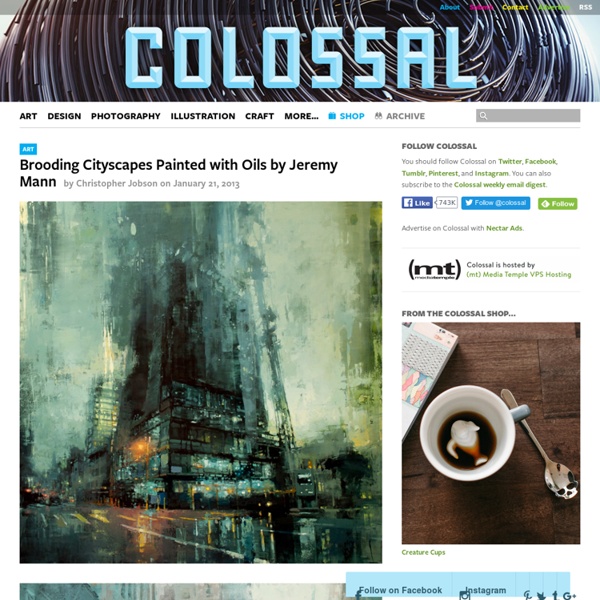 San Francisco-based artist Jeremy Mann executes these sublime, moody cityscapes using oil paints. To create each work he relies on a wide range of techniques including surface staining, the use of solvents to wipe away paint, and the application of broad, gritty marks with an ink brayer. The resulting paintings are dark and atmospheric, urban streets seemingly drenched in rain and mystery. Mann’s work is in no way limited to cityscapes, he also paints the human figure, still lifes, and landscapes. He currently has work at John Pence Gallery and you can see many more of his cityscapes here. (via my darkened eyes)

Boca do Lobo's inspirational world China has a long tradition of wooden sculptures. For centuries they are transforming pieces of raw wood into works of inspiring art , but none as impressive as the sheer creation of Zheng Chunhui . This talented Chinese artist spent the last four years meticulously carving a detailed replica of a famous traditional Chinese painting called ” Along the River during the Qingming Festival ” in the trunk of a little over 12 feet long tree.

Graffiti, B Inspired In this article you will find an amazing combination between HDR picture and graffiti. This combination makes colors pop-out and photos looks vivid and full of life. B | Creative, is a Creative blog based on Advertising, Fashion, Architecture, Tutorials and Design Inspiration. Now, you can publish you Articles in the B | Social Category. Explosions of Color from a Chinese Artist Hua Tunan is a rising artist in China. Combining the traditional elements of Chinese art and culture with a modern twist, Hua brings about beautiful explosions on the canvas. Based out of Foshan, Hua (also known as 画图男) does performance and street art in addition to his paintings. His work has gathered the attention of companies such as Volvo, who flew him out to Zurich to do graffiti art on one of their blank cars for a performance. As his art continues to stimulate viewers, we at Visual News will keep an eye on him and his work at Chinese creative agency NeochaEDGE. To see more of Hua Tunan’s works click here.

Masks Designer Bertjan Pot created these masks out of a material experiment. He wanted to find out if by stitching a rope together he could make a large flat carpet. Instead of flat, the samples got curvy. When Pot was about to give up on the carpet, his colleague and friend Vladi came up with the idea of ​​shaping the rope into masks. The possibilities are endless and every mask tells its own little story. Iain Macarthur Artist Bio Born in 1986 in Swindon, England. Became a fanatic of art at the age of eight in which I was introduced to art through watching a lot of cartoon shows and comic books. First ever comic I looked at was the Batman series. Since then I’ve been obsessed with drawing odd fantasy drawings and anime characters. When I got older I diverted from anime drawings to realistic figures and faces, always striving to make them more detailed and photorealistic.

Accolade to the artwork of Graffiti – 50 Creative and Inspiring Write for PSDRockstar.com Are you a photoshop guru? Writing tutorials can be quite a challenge, and PSDRockstar.com is always on the lookout for talented photoshoppers 16 Incredible Van Gogh Paintings Tilt Shifted Tilt Shift is an incredible lens effect that transforms normal scenes into tiny toy worlds. It’s a topic that’s already been shown extensively here on PhotoGuides with tilt shift collections and photoshop tutorials, but these new examples take on a new level of amazingness. ArtCyclopedia has created an astonishing range of Tilt Shift photographs which apply the effect to some of Van Gogh’s famous paintings. The results really are stunning.

Dran - The French Banksy Based in Toulouse, Dran is a multi-talented artist who uses a variety of media such as installations, paintings and drawings to convey his ironic viewpoint. After developing his skills as part of Toulouse’s renowned graffiti scene. He is also a fan of the absurd and has published a number of books featuring his funny sketches parodying everyday events with great doses of surrealism. KNITTING CLOCK The 365 Knitting Clock by Sirene Elise Wilhelmsen is stitching the time as it passes by. It is knitting 24 hours a day and one year at the time, showing the physical representation of time as a creative and tangible force. After 365 days the clock has turned the passed year into a 2 m long scarf. Now the past can be carried out in the future and the upcoming year is hiding in a new spool of thread, still unknitted. All images © Miriam Lehnart

Young girl who’s best friends with African wildlife Born in Africa to French wildlife photographer parents, Tippi Degré had a most unusual childhood. The young girl grew up in the African desert and developed an uncommon bond with many untamed animals including a 28-year old African elephant named Abu, a leopard nicknamed J&B, lion cubs, giraffes, an Ostrich, a mongoose, crocodiles, a baby zebra, a cheetah, giant bullfrogs, and even a snake. Africa was her home for many years and Tippi became friends with the ferocious animals and tribespeople of Namibia. As a young child, the French girl said, “I don’t have friends here. Because I never see children. So the animals are my friends.”

Museum of Optical Illusions Art & Design The Trick Art Museum in Seogwipo City is a museum full of optical illusions. The spectators have to interact with the artworks to fully appreciate the illusions. A Rainbow of Colors - The artwork of Joshua Petker Joshua Petker was born in Los Angeles, CA in 1979 and received a BA in Western History from The Evergreen State College in Olympia, Washington. While pursuing a degree in History he maintained a growing interest in the arts that developed out of a fascination with graffiti which Petker started creating at the age of 15. After studying abroad in 2001 at the Lorenzo de'Medici Institute of Florence, Joshua decided to pursue a career as a fine artist upon completion of his studies back in the U.S.A. Van Gogh, Neal Cassady, Cy Twombly, Mark Rothko, J.M.W. Turner, and Andy Warhol are some of the artist’s inspirations. Color abstraction and the human figure, primarily females, are the main motifs in his art.

16-Year-Old's Photo Project Shows the Culture and Counterculture of the Past 100 Years Flapper. Beatnick. Hippie.