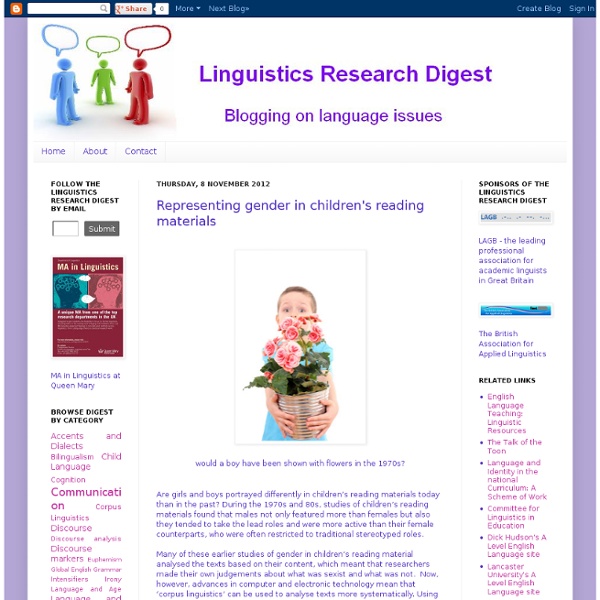 would a boy have been shown with flowers in the 1970s? Are girls and boys portrayed differently in children’s reading materials today than in the past? During the 1970s and 80s, studies of children’s reading materials found that males not only featured more than females but also they tended to take the lead roles and were more active than their female counterparts, who were often restricted to traditional stereotyped roles. Many of these earlier studies of gender in children’s reading material analysed the texts based on their content, which meant that researchers made their own judgements about what was sexist and what was not. Macalister based his study on New Zealand’s School Journal, a multi-authored journal of prose, drama and poetry, published and distributed to New Zealand school children every year. In the first three issues of the Journal, Macalister found that ‘boy/s’ outnumbered ‘girl/s’.

Marjorie Rhodes, Ph.D.: How Generic Language Leads Children to Develop Social Stereotypes Consider the following statements: "Girls have long hair"; "Jews celebrate Passover"; "Italians love pasta." These statements make claims that we view as generally true of groups, even though we can easily call to mind exceptions (e.g., girls with short hair, Italians who dislike pasta, etc.). In linguistics these statements are called "generics." Nevertheless, recent research that Dr. Children were shown Zarpies one at a time. Hearing generic sentences had striking effects on children's beliefs. What does this mean? Second, the children who previously heard generics were more likely to view Zarpie traits as inborn and inevitable. Children who had previously heard generics were more likely to assume that the baby would still grow up to have Zarpie traits (e.g., being scared of, instead of liking, ladybugs). In a third study, we examined the circumstances under which parents produce generics when talking to their children. What do all these findings mean?

#Tweet #Tweet Founded in 2006, Twitter is the online social networking service that allows its users to communicate via text-based messages of up to 140 characters, known as ‘tweets’. Communication in Twitter is fast-paced and it can be difficult to keep track of the talk that emerges, so a convention has arisen among Twitter users whereby a hashtag (#) can be used as a prefix to make the term searchable and then others can search for tweets that have that same topic. So, for instance, a search of #LFW this week in Twitter should produce a list of tweets relating to London Fashion Week. Page’s study investigates the way that Twitter members use hashtags as a way of gaining increased attention in order to self-promote, relating this to the notion of ‘self-branding and micro-celebrity’ (the idea of promoting one’s self in order to gain status or fame in the offline world). Overall, Page found that corporations and celebrities most frequently use hashtags.

Hoodies strike fear in British cinema | Film Who's afraid of the big bad hoodie? Enough of us, certainly, that the smart money in British cinema is going on those films that prey on our fear of urban youths and show that fear back to us. These days, the scariest Britflick villain isn't a flesh-eating zombie, or an East End Mr Big with a sawn-off shooter and a tattooed sidekick. It is a teenage boy with a penchant for flammable casualwear. What separates hoodies from the youth cults of previous moral panics – the teddy boys, the mods and rockers, the punks, the ravers have all had their day at the cinema – is that they don't have the pop-cultural weight of the other subcultures, whose members bonded through music, art and customised fashion. Greg Philo, research director of Glasgow University Media Group and professor of sociology at the university, traces our attitudes to hoodies back to the middle classes' long-held fear of those who might undermine their security. "If you go to these places, it's very grim," says Philo.

Retronaut - See history. Skivers v strivers: the argument that pollutes people's minds | Politics "Skiver" v "striver". It suits Cameron's tabloid-slick delivery and Steve Hilton's blue-sky viciousness, but how did it go viral? Why does Ed Miliband now use "striver" as though it were an acceptable way to describe someone, by a stranger's groundless estimation of how hard they are hypothetically trying? Don't tell me it is because it rhymes. Sarah Teather, who on Tuesday was one of the pitifully few (four) Lib Dems voting against the welfare bill, described the so-called "skivers" she encounters in her constituency office: "People who come to my constituency office these days for help with some kind of error in their benefits often spend the first few minutes trying to justify their worth. How did this come about? People sometimes ascribe this adoption of "welfare" as an Americanism, designed to convey some of the US's sneering synecdoche where the name of the government support becomes shorthand for the person being supported.

Ideas Illustrated » Blog Archive » Visualizing English Word Origins I have been reading a book on the development of the English language recently and I’ve become fascinated with the idea of word etymology — the study of words and their origins. It’s no secret that English is a great borrower of foreign words but I’m not enough of an expert to really understand what that means for my day-to-day use of the language. Simply reading about word history didn’t help me, so I decided that I really needed to see some examples. Using Douglas Harper’s online dictionary of etymology, I paired up words from various passages I found online with entries in the dictionary. The results look like this: The quick brown fox jumps over the lazy dog. This simple sentence is constructed of eight distinct words and one word suffix. A second example shows more variety: Supreme executive power derives from a mandate from the masses, not from some farcical aquatic ceremony. What follows are five excerpts taken from a spectrum of written sources. Passage #1: American Literature

Sexist Terms - and alternatives Sexist Terms - and alternatives This list of sexist terms shows not only what may be avoided but also how they may be avoided. If in the company of people who are made uncomfortable by sexist terms, there is a polite and linguistically acceptable alternative in most cases. The often quoted "person aperture cover" for "man hole" is both a hoax and a parody of the intention of the language. The following are becoming increasingly accepted and mostly are no longer an issue of contention. The following checklist of alternatives to sexist language was produced by a publisher giving advice to authors. 1. If the gender of the person being discussed is unknown or could be either female or male, there are several alternatives. The Female Leader Gerada said that if she had been a male leader she would have been referred to as "strong willed" or "open minded" but instead was described as "naive." Can we be neutral? A proposed set of "Spivak gender" pronouns includes "e, em, eir, eirs, eirself, sie."

Readability-Score.com - Free Online Readability Calculator - Flesch Kincaid, Gunning Fog and more ... The battle against 'sexist' sci-fi and fantasy book covers Science fiction and fantasy novels routinely portray scantily clad woman on their covers - a device that draws the heterosexual male eye but may turn away women readers. Lynsea Garrison finds one fantasy author aiming to zap gender stereotypes. Jim Hines straddles the remnants of a defeated alien species (a table), and clasps a pistol (a toy gun) as he triumphantly raises a cyborg's head (a toaster). Sometimes he fights battles alongside his romantic interest (a large teddy bear). But no matter the mission, Hines shows some flesh. Just because he is waging a war, it does not mean he cannot be alluring at the same time, right? Hines, a fantasy author, is posing like some of the female characters on science fiction and fantasy book covers he says objectify women. He gets into character by twisting his body into the same contorted positions as the female characters on the books. "The way women are portrayed is just so ridiculous, so often, you just stop seeing it," Hines says.

If Obama had been Lincoln: 10 lines from Obama’s Second Inaugural Address that wouldn’t have been used in 1865 When writing his screenplay for the film Lincoln, playwright Tony Kushner used his copy of the Oxford English Dictionary to check for possible anachronisms, seeking to impart the flavor of 19th-century English to the script. How much has the vocabulary of English changed since Abraham Lincoln’s presidency? About 25% of the OED’s entries are for words which entered the English language after Lincoln delivered the Gettysburg Address, including racism (1926), leftist (1924), and boycott (1880). The chart below shows the OED’s headwords by decade of their first recorded date, highlighting the surge of new words in the late-19th century. Of course, that doesn’t mean that 25% of English in contemporary use consists of words adopted since 1863. The core vocabulary of English is ancient, and it is difficult to utter a sentence that doesn’t include at least some words dating back over a thousand years. 1. 2. . . . preserving our individual freedoms ultimately requires collective action. 3. 4.

How women make the front page in Britain: get the full data | News Male bylines and sexist stereotypes dominate Britain's national newspapers, new research out today has revealed. We have the full background data behind this story for you to explore. A study by Women in Journalism (WiJ) found that 78% of all front-page articles were written by men compared to 22% by women. Nine national newspapers were analysed over the course of four weeks and revealed results that closely reflect research done by the Guardian last year. The WiJ report also looked at the lead pictures on the front page and found that the Duchess of Cambridge and her sister Pippa Middleton, along with victim Madeline McCann were the most regularly pictured females. The tables below show the bylines by each of the nine papers analysed and also the front page photographs. Data summary Download the data • DATA: download the full spreadsheet NEW! • Facts are Sacred: the power of data (on Kindle) More open data Data journalism and data visualisations from the Guardian World government data