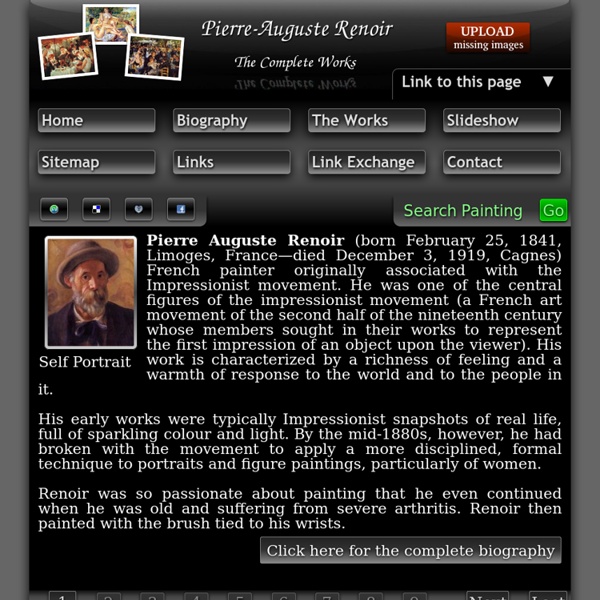 Claude Oscar Monet - The complete works Pierre-Auguste Renoir Biography A leading Impressionist painter, Pierre-Auguste Renoir was one of the most famous artists of the early twentieth century. Synopsis An innovative artist, Pierre-Auguste Renoir was born on February 25, 1841, in Limoges, France. Early Years The son of a tailor and a seamstress, Pierre-Auguste Renoir came from humble beginnings. As a teenager, Renoir became an apprentice to a porcelain painter. Using imitation as a learning tool, a nineteen-year-old Renoir started studying and copying some of the great works hanging at the Louvre. Beginning of Career In 1864, Renoir won acceptance into the annual Paris Salon exhibit. While his Salon works helped raise his profile in the art world, Renoir had to struggle to make a living. Around 1867, Renoir met Lise Tréhot, a seamstress who became his model. Renoir had to take a break from his work in 1870 when he was drafted into the army to serve in France's war against Germany. Leader of Impressionism International Success Final Years

Edgar Degas - The complete works Paul Cezanne - The complete works Hey Kids, Meet Pierre Auguste Renoir | Biography Hey Kids, Meet Pierre Auguste Renoir from the Hey Kid's, Meet the Artist! Index Pierre Auguste Renoir was born on February 25, 1841 in Limoges, France. He was the sixth of seven children born to Léonard Renoir and Marguerite Merlet. Pierre's first experience with painting came in 1854 when he took his first job working in a porcelain factory painting designs on fine china. His talent for painting would have assured him a career as a porcelain painter, but the company went out of business four years later. In 1861, Renoir began attending the art studio of Swiss teacher Marc-Gabriel-Charles Gleyer. In 1869 Renoir and Claude Monet worked together to produce the first landscape paintings in the impressionist style. In 1878, Renoir's Le Café, a painting of a young woman enjoying a cup of coffee, was accepted the Salon. Renoir married Alice Charigat at the age of 40. Pierre August Renoir died in France on December 3, 1919. Pierre August Renoir Lesson Resources Pierre August Renoir Art Gallery

Impressionism Movement, Artists and Major Works | The Art Story "Impressionism is only direct sensation. All great painters were less or more impressionists. It is mainly a question of instinct." Impressionism can be considered the first distinctly modern movement in painting. Impressionism was a style of representational art that did not necessarily rely on realistic depictions. The Impressionists loosened their brushwork and lightened their palettes to include pure, intense colors. Impressionism records the effects of the massive mid-nineteenth-century renovation of Paris led by civic planner Georges-Eugène Haussmann, which included the city's newly constructed railway stations; wide, tree-lined boulevards that replaced the formerly narrow, crowded streets; and large, deluxe apartment buildings. Subscribe to Share on Facebook Share on Twitter Welcome to The Art Story! Error occured while saving data... Like The Art Story Foundation on Facebook Impressionism Beginnings Exhibitions in Paris and The Salon des Refusés Salon des Artistes Indépendants

Vincent van Gogh Gallery - Welcome! Pierre-Auguste Renoir Pierre-Auguste Renoir is one of the most well-known and beloved Impressionist painters. He painted Luncheon of the Boating Party (the first painting shown below), which hangs at the Phillips Collection in Washington, D.C. He also painted Girl with a Watering Can (the second painting shown below) which can also be found here in D.C., at the National Gallery of Art, but which I remember best from the print that used to hang in my aunt’s entryway. The third painting shown below is one of Renoir’s most famous, Moulin de la Galette. Renoir was born in 1841. His family moved to Paris when he was 3 years old. He worked a few jobs but decided quickly that he wanted to be a painter. You may remember that artists who wanted to show their work at the Paris Salon had to send their work in to be accepted by a group of judges. Renoir met many of the painters who would become Impressionists. In 1870 France and Prussia went to war. The first Impressionist exhibition opened in 1874. Return to main page.

Renoir Large Bathers - Essays - Marissa4Hill Renoir’s Large Bathers As a student in a suburb of Philadelphia, I have had the opportunity to visit the Philadelphia Museum of Art on multiple occasions over the last two and a half years. On some visits, I spend my time staring at Van Gogh’s Sunflowers while other times I dedicate my time to admiring the Sculpture Garden; but one thing that stays the same through every visit is my shameless staring, dare I say gawking, at Pierre-Auguste Renoir’s Large Bathers. This 1887 oil on canvas is the epitome of late 19th century European art, combining aspects of mid-19th century Impressionism, the frivolity of 18th century Rococo, and Classical nudes. Though I cannot quite place my finger on what draws me to this piece, I do know that the cheerful pastels, sensual lines, and lighthearted subject make Large Bathers one of the top paintings I have had the pleasure of viewing.

On-line Picasso Project Renoir We really enjoyed our study of Renoir, I must say that we battled to stick to just five or six of his paintings as there were so many that we loved! One of his most famous paintings, La Moulin de la Galette was a typical example of impressionism and you can see how his brushstrokes depict the sunlight coming through the trees. Apparently he loved to draw from a very young age and his parents arranged for him to get a job at a porcelain factory where he was then chosen to paint designs on fine china. We decided to have a go at "painting china" too! We read about his life in Pierre Auguste Renoir (Getting to Know the World's Greatest Artists) , and one thing that struck me is that a number of the artists we have learnt about spent time studying works of art in galleries! Another lovely book about his life is Smart About Art: Pierre-Auguste Renoir: Paintings That Smile . He loved painting outdoors, so we spent an afternoon painting en plein air which was a real highlight for my children.